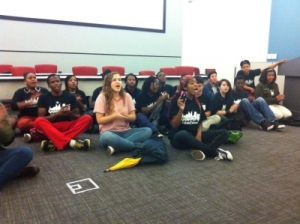 When the Philadelphia School District decided to hold a *parent engagement* night featuring a showing of the charter happy, parent trigger flick Won’t Back Down,  members of the Philly Student Union showed up, sat down and Wouldn’t Get Up. I spoke with new member Ruby Anderson about the students’ vision for public education in Philadelphia and what she would say to reform advocates if given the chance.

EduShyster: Give us a little back ground. What’s the Philly Student Union and why do you keep showing up places where you’re not invited?

Ruby Anderson: We’re students who all go to Philly public schools. It’s a very diverse group. Some of us go to charters, some go to neighborhood schools, some go to magnets. It’s pretty simple. We want to ensure equal access to education for everyone. When you’re putting something that should be a public good into the hands of private interests via massive charterization, that is not going to give equal access. The main things we’re fighting for right now is a democratically elected school board, which Philadelphia doesn’t have, and a fairer funding formula in Pennsylvania. 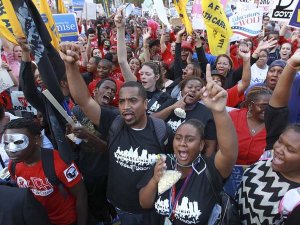 EduShyster: It sounds as though things have been heating up there lately.

Anderson: Basically since Governor Corbett has been in office he’s cut $1 billion from education and because of that the school district has had to take austerity measures to make sure that schools can actually be open. On top of this, the Philadelphia School Reform Commission or the SRC won’t take the measures necessary to ensure that our schools can get the funding we need. They’ve repeatedly failed to understand the real problems in the Philly schools. For example, they take the position that it’s the teachers who need to make sacrifices in order to fund the schools. But teachers are the most essential part of our education. Does it really make sense to ask them to bear the majority of the burden?  You should know that the SRC isn’t popular in Philadelphia, and a lot of people blame them for really messing up the education system here in the 15 years that they’ve been in charge.

EduShyster: But if the teachers were really putting students first instead of just thinking selfishly about themselves, wouldn’t they work for free?

Anderson:  That’s more or less the way the SRC sees it, but teachers also have to live. In order to take care of other people, you also have to make sure that you’re taken care of. Do we really want our teachers to spend all of their time worrying about putting food on the table or how they’re going to pay for their child’s college education? I have one teacher who, now, because he has to pay into his health insurance plan is no longer going to be able to afford to send his kids to preschool. 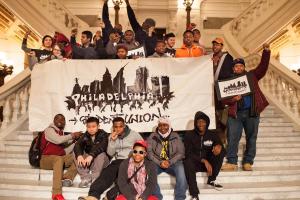 EduShyster: I happen to know quite a few education reform types, including some who advocate converting Philadelphia to an all charter district. Do you have any messages you’d like me to pass along?

Anderson: Stop treating education as a business instead of a system that is held up by human beings. Every time they talk about cuts or austerity, it’s not just funds that are being cut but students. Every time a school loses a counselor, it means fewer kids get the resources they need to apply to college. Every time a school loses a nurse, that means more students who have to go to the hospital, and their parents have to pay that bill, rather than having a nurse who can treat them there. There’s a human cost to all of this.

EduShyster: This week, a group of you decided to go to the movies together. What did you see?

Anderson:  The school district decided to have a special parent’s appreciation movie night and show Won’t Back Down, an anti-union, pro-charter film, funded by the same people behind Waiting for Superman. It’s pretty obvious that in the wake of canceling the teachers union contract, showing this movie was just a shady ploy to manipulate parents into supporting school privatization. Twenty minutes into the film, we took off our regular shirts—we had our Philly Student Union shirts on underneath—and we marched to the front of the room and had a little sit-in in front of the movie screen. Not everyone was happy about that.

EduShyster: I was very happy about it. In fact, groups like the Philly Student Union give me a lot of hope, even if they do cause me to reflect upon the somewhat lower-performing days of my own high school experience. Anything those of us outside of Philadelphia can do to support your efforts?

Anderson:  Share our stories. That really helps a lot. I think that often people who are outside of Philadelphia, even people who live in Pennsylvania, don’t understand what’s going on. I was talking to my grandma on the phone yesterday about what’s happening in Philly and I told her about the SRC and she said: *they aren’t elected! Someone should tell Tom Wolf!* I think he probably already knows, grandma.

Ruby Anderson is a senior at the Science Leadership Academy in Philadelphia and a member of the Philly Student Union.