Philly KIPP principal Ben Speicher and I chat about The Bachelor, the charter school backfilling debate and the evolution of KIPP…

EduShyster: You and I happen to have in common two passions: our shared love of the TV show, The Bachelor, and a strong belief that charter schools should play by the same rules that govern most public schools. A few weeks ago I happened to be watching the show whilst also reading this piece by confirmed non-bachelor Mike Petrilli, arguing that as students leave, charters shouldn’t have to accept new students. I shared my view that the backfilling debate and the controversies that have beset this season of The Bachelor are not unrelated. To which you had this to say: 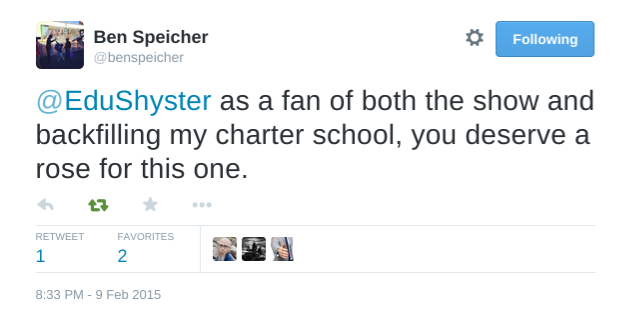 Ben Speicher: I’m a proud fan of The Bachelor and have even been known to use clips of the show during staff training sessions. As much as like watching the show to see who gets the final rose – and who gets sent home – I work hard to keep attrition low at my school so we never have to say goodbye to our kids.

EduShyster: Awwwww. For people who are just tuning in, why don’t you fill us in on the whole backfilling debate. Why is it causing so much drama in the education reform house?

Speicher: The education reform house is a fairly big one, and people are drawn to education reform for a variety of different reasons. I think some folks would say that charter schools represent the ideal of total independence. When Mike Petrilli and others make the argument that the rules around enrollment practices should be different for charters, I disagree. For me, it’s much more about equity—giving all kids, regardless of their background, access to a great education. If a student leaves us, we take a new student in off of our waiting list. We have a waiting list that’s between 400 and 600 students long each year, and these are students who applied to attend our school the previous year. When kids leave in the middle of the year—and it’s almost always because families are leaving Philadelphia—we go to our waitlist and if the person who is number one on the waitlist doesn’t want the spot for whatever reason, we keep going until we get to somebody who wants it. We do that anytime throughout the year. So it’s pretty automatic for us. We’ve done that at our elementary school since we opened 5 years ago.

EduShyster: My role here is to play the part of the intrepid tabloid reporter who digs up dirt about The Bachelor’s would-be suitors – say, an embarrassing mug shot. Which is to say that this hasn’t always been KIPP’s position, correct?

Speicher: This is something that has really evolved for KIPP Philadelphia in recent years. Originally we didn’t backfill in our middle school in our higher grades at all. We talk with the teachers in our building about the fact that a core part of our mission is taking all kids, serving all kids, keeping all kids. You know, we have over 20% of students with IEPs and attrition under 4% each year. That’s a responsibility that we embrace, but there’s no getting around that it makes our jobs harder. At the end of the day, the question we had to ask ourselves is, are we serving the maximum possible number of students who need us? If we have room, then bringing in students mid-year or in the older grades makes sense. So we decided to start backfilling, and now we do it throughout the year in all grades. And if you look at our enrollment, you can see that – our 8th grade classes are almost exactly the same size as our entering 5th grade cohorts.

EduShyster: I’ve written quite a bit about how charter high schools in Boston that lose a lot of students, boys in particular, and don’t replace them, end up with tiny numbers of graduates. It occurs to me now that the appropriate metaphor isn’t The Bachelor but The Bachelorette, where the cohort of young men is winnowed week by week until the final rose is handed down, in this case college. Thoughts?

Speicher: While I can’t speak to the particulars in Boston, from my experience in Philadelphia, this is something which people are still talking about like it’s a footnote, or an asterisk. *Well, this particular charter school is doing a great job, but their enrollment practices are a little questionable.* KIPP’s middle school in Philadelphia opened in 2003, and we had a lot more attrition than we do now and didn’t backfill in our older grades. That first class was in 8th graders in 2007 and that year we had our highest results ever on the state tests—but that group only had 30 something kids in it out of the 90 who started 4 years earlier. Our percent of students passing the state test has never been that high again, but because we now have 85 or more students in 8th grade, the total number of kids who are proficient or advanced on the state tests is twice as high in terms of raw numbers. Since we report the percentage of students who pass, it looks as if we’re doing a worse job than we used to, but in a lot of ways we’re doing a better job. We’re holding onto kids better and still getting results that are higher than all but 1 or 2 district schools who serve a similar student population. What I would love, if I was an authorizer, is the idea that you would measure state test results, but the denominator would be the number of kids you began with. Because that matters a lot. If a school has 75 kindergarten students and only 30 are still there in 4th grade, but they all pass the test, that’s only 30 out of 75 that the school has fulfilled its mission to. That shouldn’t be good enough and not enough people are paying attention to those numbers.

EduShyster: I think some of the people reading this, particular those whose hearts pound for charter schools, will take your criticism of, say, sketchy enrollment practices, as an indication that you may not be here *for the right reasons.* So let’s go there. This is the part where you pull me aside and warn me about the intentions of the other girls, or in this case, charters.

Speicher: Philadelphia has had some charters with pretty egregious enrollment practices. There’s one school, for example, where in the recent past, the application you have to fill out could only be picked up one day a year. And the response of the district, which is the charter authorizer in Philadelphia, was:

*Your results are really good. But next time you really should make the application available on more than one day.* Which is the same as saying *in the future you need to change that.* That message needs to be much stronger because if you’re not truly serving all students you’re not doing what you set out to do and your scores will look better. Charter schools have to be held accountable for their enrollment practices and authorizing is a huge part of that.

EduShyster: I’m not quite ready to give KIPP a rose, but I definitely get the sense from talking to you and others that KIPP is evolving in some important ways. Are there other areas besides backfilling where you see KIPP moving in a different direction?

Speicher: I see big changes in the way KIPP Philadelphia thinks about student culture and discipline. In the beginning, our discipline policies were more regimented and honestly, we were much quicker to say that a student wasn’t a good fit for our school. But we realized that if our goal is to successfully work with every kid no matter what their challenges are, we had to evolve our thinking and practices. KIPP is pretty decentralized, so it’s hard to speak for everyone, but from visiting something like 40 KIPP campuses over the years, I think skeptics would be surprised at how un-regimented many school cultures are, especially in our elementary schools. We had to make the commitment to keeping all our kids and giving them a joyful, engaging school culture. Joy is one of our values at KPEA and you see kids smiling and hear them laughing all day long in our building. Kids not being able to talk all day, silent lunches, public ostracizing of kids—that doesn’t happen a lot anymore in the way that I think it maybe still does in some other charter networks. What you’re not going to hear are any adults yelling since we have a strong staff commitment not to do that. We’re far from perfect, but everyone I talk to in the KIPP network is thinking about what is going to best get our students ready to succeed in college so we have to be thinking about what is building student character for the long-term.

Ben Speicher is the principal of KIPP Philadelphia Elementary Academy. He blogs at buildingagreatschool.blogspot.com and Tweets @benspeicher.