What a murky transaction between Massachusetts charter operators says about a little problem called ‘edu-fraud.’

When leaders of a troubled charter school in Gloucester, MA needed emergency funds, they went to prominent charter advocate Diana Lam, who was happy to oblige—for a hefty fee.

We already know that charter schools are outstanding at achievement gap narrowing, test score soaring and expectations raising. But there’s a little something else that charters turn out to be exceptionally good at: taxpayer fleecing. You see, it turns out that when all of those innovation-stifling regulations are lifted, charter operators behave just like their colleagues in other scrutiny free zones—they lie, cheat and steal. A reporter in Arizona recently turned up staggering levels of charter school corruption in that state, including $70 million worth of contracts awarded by charter operators to friends and family members. And that was just in the nonprofit charter schools—records of for-profit schools aren’t publicly available.

Why so much edu-fraud? It turns out that state officials who are the biggest boosters of charter schools may not be the best people to ensure that the schools are following the rules. Which means that outright illegality, not to mention murky transactions, get swept right under the edu-rug. Reader: I invite you to pour yourself a stiff Dark n’ Stormy (don’t stint on the rum) and accompany me to scenic Gloucester, Massachusetts, where the briny sea air can’t quite disguise the scent of charterus odorus malus.

Back in September, leaders of the Gloucester Community Arts Charter found themselves with a wee problem on their hands. An unending series of mini-scandals, not to mention test scores that are among the worst in the state, resulted in plummeting enrollment—and a resulting dip in state-provided edu-bucks. So to remedy the shortfall, the charter leaders did what any school administrators might do. They reached out to the head of another charter school and asked for a personal loan of $75,000 for three weeks, secured by their next fix of taxpayer money. 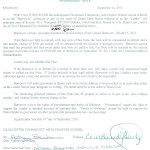 A local tipster helpfully provided EduShyster with the promissory note for this unique arrangement, which you can view here or by clicking on the image at left. But wait—there’s more. Our cash-strapped innovators didn’t hit up just anybody for emergency funds. They went to Diana Lam, a prominent reformer and charter-advocate who has left a trail of edu-destruction in city after city, including San Antonio, where she resigned as superintendent, after receiving a buy out worth nearly $800K.  A former “change agent” for Joel Klein in New York, Lam was forced out over nepotism chargers (Lam’s own employees tipped off reporters to the fact that her husband was working in a department that reported to her). Her brief tenure was characterized by what seems to have been a unique ability to alienate everyone she encountered. “Wherever she went, teachers hated her,” the Manhattan Institute’s Sol Stern told New York Magazine.

These days Lam runs the Conservatory Arts Charter School in Boston where teachers formed a union in 2009, frustrated by staff turnover approaching 60% per year. Alas, high turnover continued and this year the school went union free. Lam told the Boston Globe that a union really wasn’t necessary. “Whenever any issue arises, it can be worked out without a third party.”

Whatever adjectives one appends to Lam’s unique management style, she is apparently a very savvy investor. Her three-week personal loan to the Gloucester Community Arts Charter School included a $2500 fee. That caught the eye of the EduShyster tipster, who obtained the promissory note through a public records request. Mr. Tipster summed up his bafflement at the arrangement this way:

First, what the Hell? Is [Lam] some kind of loan shark for charter schools? Is that common practice, to have Commonwealth funds going into the pockets of private loan providers? Can I lend a few thou to the T and get some brass back in the process? (actually, scratch that) Usury is illegal. That is the private realm of the credit card companies. It is actually against the freaking law to do that. And for her to be loaning at high return rates to a public institution? I’m so confused as to why this would be considered appropriate if even remotely legal.

Count EduShyster as officially confused too—and not just from the deep swigs of Dark n’ Stormy that merely typing the words Gloucester Community Arts Charter necessitates. In its zeal to promote charters, the Massachusetts edu-establishment has been too willing, even eager, to overlook the schools’ problems. Meanwhile, the undeniable stench of charterus odorus malus drifts steadily southward. I predict it will reach state education officials this week.

Update: Education officials conducted a site visit at the Gloucester charter in October, in order to assess whether the school is meeting various state-imposed conditions. An eagle-eyed reader noticed a familiar name on the list of officials who visited the school: Diana Lam No word on whether Lam revealed her unique interest in the school—about 60% APR by my calculations..