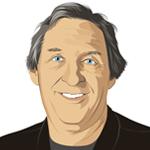 Lawrence Harmon and other writers at the Boston Globe are covered by a union contract with strict seniority protections in the event of layoffs.

Study after study has proven that teachers get worse and worse the more experience they have. Actually, no study has ever shown anything remotely like this because it is an utterly preposterous claim. And yet I know it’s true because I read it in the Boston Globe at least three times a week.

The Globe’s argument goes something like this: teachers are at their very best when just beginning their careers. Fresh, energetic, innovative and hard working, they are undimpled vessels of excellence. But then that cruel bitch, experience, comes along and ruins them! While their fresh, energetic, innovative and hard working young colleagues race around in front of their smart boards, not content to rest for a moment lest the achievement gap widen under their watch, the old teachers sit at their desks, muffin in one hand, newspaper in the other, counting the days until they can get to Old Orchard Beach and unwind with a 30 pack. Do these oldsters even know what a smart board is???

A perfect stool sample of the Globe’s insistence that teachers get worse with time was on display recently in a Lawrence Harmon special called Talent, Not Time, Marks a Teacher. But don’t take my word for it. I insist that you enjoy some of Harmon’s nuggets of wisdom for yourself.

“Sometimes what passes for 25 years of experience is little more than one uninspired year of teaching repeated 25 times.”

“Protecting the young is the first rule of survival for any species. But not in Boston schools.”

“Worse still, many students are destined to spend another year in classrooms led by teachers whose best skill is hanging on.”

Now to be fair this is a topic on which Mr. Harmon is in fact an expert. After all, he’s been ‘hanging on’ at the Boston Globe for years.The Globe, like most metro dailies, has been savaged by layoffs in recent years. Like you, I would assume that wise Globe managers decide who to let go on the basis of merit. Or perhaps they have a cool, value-added algorithm that precisely calculates the contribution of an individual writer to narrowing the Globe’s widening subscription gap. Or surely evaluation must play a role. No doubt keen-eyed observers read every column just to make sure that no one is phoning in the same puff piece on charter schools week after week.

Well, we would be wrong. Mr. Harmon, like all of the writers at the Globe, is a member of the Newspaper Guild and is covered by a contract that guarantees strict seniority protections in the event of layoffs. That means that while dozens of fresh, energetic, innovative and hard working writers have been let go during the past ten years, lifers like Mr. Harmon, who has been camped out on the editorial pages for the last 20 years, hang on. In fact, until recently, Mr. Harmon was one of a select group of writers at the Globe with a so-called lifetime job guarantee.

So let’s try that again, shall we?

“Protecting the young is the first rule of survival for any species. But not at the Boston Globe.”

“Worse still, many readers are destined to spend another year reading columns by hack writers whose best skill is hanging on.”