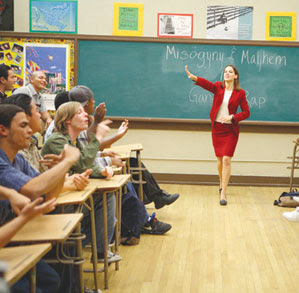 Today’s high-stakes question involves the demographics of our nation’s teaching force. When and where is it appropriate to discuss the urgent need to diversify the nation’s teaching force whilst failing to acknowledge what’s happening to the ranks of minority teachers who are already teaching? The answer: in whatever city Arne Duncan’s *bigger rigor* bus tour happens to have landed. You see, even as a much-needed conversation about the vital importance of having teachers of color in front of an increasingly diverse student body is taking place, a bouquet of reform policies is effectively pushing out existing teachers of color. Bundle up reader, because we’re headed to Boston where the nip of fall is in the air and minority teachers are being *reformed* right out of the city’s public schools. 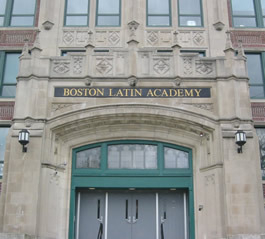 Needs improvement
Our destination today is Boston Latin Academy, one of the city’s exam schools, and home to the latest installment in our series: The Incredible Shrinking Veteran Minority Teaching Force. If you’re only just now tuning in, let me bring you up to speed. Two years ago, the Boston Public Schools rolled out a new evaluation system to provide *more rigorous oversight of teachers and administrators.* And there was great news—for administrators, who received rigorously robust ratings. As for the city’s minority teachers? Not so much. A rigorous review of school department data found that black and Hispanic teachers, along with older teachers, were more likely to score poorly than their *brighter,* *whiter* and *lighter* experienced colleagues.

Assessment assessment
Following so far? Good—or rather, bad—because here’s where an already troubling tale takes an even more troubling turn. At Boston Latin Academy, minority teachers (who were already a decided minority), appear to have been singled out 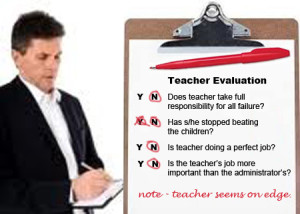 for an especially rigorous evaluation process at the hands of white administrators. [Note: if you have your assessment assessment rubric handy, check off *stepped up* classroom observations, *nuanced* evaluations, *enhanced* scrutiny and *exit tickets* now.] The situation was so outrageous that dozens of teachers at the school spoke up, sending a seven page letter, along with a thick stack of documentation, to district leaders. And unusually, district leaders acted. Two weeks before the start of school, three Boston Latin Academy administrators were placed on leave as officials investigate the teachers’ charges of harassment, discrimination and intimidation. [Fun extra credit activity: retell the story of teachers coming to one another’s aid across lines of race, gender and years of experience in the post-tenure era.]

In which I talk to an actual teacher
I found one teacher who was willing to talk about her year at Boston Latin Academy. Katina Mcclain came to BLA after serving as department head at another school. Things seemed to be going well, says Mcclain, until she learned midway through the year that her previous year’s evaluation had been retroactively changed, from *proficient* to *needs improvement.* [Editorial note: what????] Her downgrade brought with it a mentor, and an invitation from BLA administrators to reinterview for her job. Spoiler alert: she received an email from the headmaster last spring informing her that she was *not the most qualified* for the position. Mcclain was crushed—she loved working at BLA—but then she heard similar stories from her minority colleagues. *The pattern was pretty obvious: black teachers, especially black women, didn’t last long at the school,* says Mcclain. *Everybody had these stories of clever ways administrators had come up with to get rid of them, but it’s blatant discrimination.*

#Trending
What say you, Boston Public Schools, about what would seem to be a troubling trend? *This is not a trend unique to a single school, to Boston or even education…* BPS officials told the Boston Globe in a 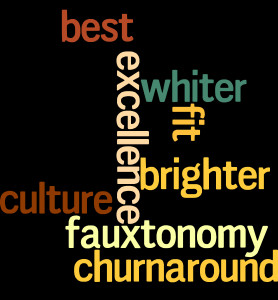 written statement. [Shout out to Globe reporter James Vaznis, by the way, for his excellent reporting here.] Trend? Did someone say trend? You see, the BPS is (are?) a poster district for a trend-setting approach that might best be described as *let someone else run the schools.* I’ve helpfully subdivided this trend into two trendlets: fauxtonomy, in which the BPS endows administrators with ever greater autonomy whilst leaving the soul-crushing accountability regime untouched, and churnaround, in which schools are turned upside down and shaken until most of their staff members (and the neediest kids) fall out. And surprise: both trendlets lead right into the trend in which minority teachers, and especially veteran minority teachers, are being reformed right out of the Boston schools.

You’re (not) hired
Thanks to their new expanded autonomy in hiring, for example, school officials are now free to hire any teacher they want, bypassing the dreaded *excess pool.* Except that said excess pool is filled with teachers like Katina Mcclain, not to mention the ever growing number of teachers whose schools are being turned around or turned over to private managers or charter operators, not subject to the court order requiring that 1/4 of the city’s teachers be African American. Oh, and did I mention that the occupants of the excess pool are disproportionately likely to be minority teachers? Only five of the teachers who remained in the excess pool at the beginning of the school year, by the way, had received a poor evaluation.

The white fit
Local reform cheerleaders like the Boston Foundation’s Paul Grogan cheer hiring autonomy because it allows school leaders to build a team of *best fit* teachers. But what if *best fit* means *white fit?* Katina Mcclain is convinced that at Boston Latin Academy, where 87% of the teachers during the 2013-2014 school year were white, fitting into the school culture meant something very specific. *There was this attitude that if you didn’t come from a certain background and attend a certain school, you weren’t a fit,* says Mcclain. *I didn’t go to Harvard, but I feel like I’m clever and smart in other ways. I went to state school and ended up debt free. I’ve lived in multiple countries and speak multiple languages. I have two degrees and have taught in four subject areas.* After 11 years as an urban teacher, three of which have been in Boston, Mcclain has decided that this year will be her last.