Where does Democrats for Education Reform’s single-issue extremism lead?

At a time when Democrats and their party are, by virtually every index, moving left, a powerful center-right pressure group within the liberal universe has nonetheless sprung up. Funded by billionaires and arrayed against unions, it is increasingly contesting for power in city halls and statehouses where Democrats already govern…

Quick reader: why does this pithy description of the charter school lobby, quoted from a recent op-ed in the Los Angeles Times, sound, um, so accurate? If you answered *because this is exactly what’s playing out in Massachusetts,* you would be correct. To see for ourselves, we need travel no further than Somerville, MA, which is the site of a somewhat, ahem, unusual political showdown. In one corner is Senator Pat Jehlen, a longtime progressive leader in the state Senate and public education champion. Her opponent, Leland Cheung, is a former Republican legislative candidate from Virginia turned Harvard student turned Cambridge City Councilor turned Democrat for Education Reform. Thirsty already, reader? 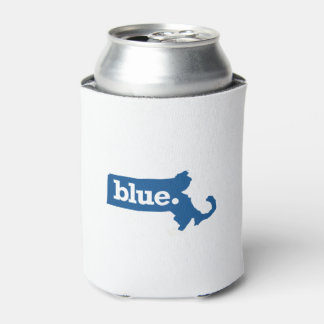 Ah, Massachusetts, my adopted home state. How surprised I was upon alighting upon your shores so, so long ago, to learn that your progressive reputation is, how shall I put this delicately?, somewhat exaggerated. If you are reading this from someplace that it is not blue, perhaps you have even cast an envious eye in our direction, coveting our solid cerulean state. Alas, reader, beneath that solid blue Mass. has long lurked something less inspiring: a sort-of three party system in which conservative Dems play BFF with what there is of a Republican party, ganging up again and again to quash any kind of progressive agenda.

No need to reach for the coozie just yet, reader, for here is where our story takes an inspiring turn. During the past few years, Massachusetts has taken a measurably progressive lurch. Like a million workers getting paid sick time for the first time. Or a big bump in the state’s minimum wage. What happened? I’m going to go ahead and brand this one as a *triple combo,* a powerful combination of grassroots energy and the support of progressive labor unions in the state. But that’s only a *double combo,* close readers have already noted. What of our third leg? That would be an increasingly influential core of progressive leaders in the state Senate—like Pat Jehlen, whom Democrats for Education Reform and its hedge funded PAC, Education Reform Now, are spending a princely sum to oust. You may now grab the coozie…

Moving right along
*But what of Senator Jehlen’s primary challenger, one Leland Cheung?* you are no doubt wondering impatiently. What do we know of him? Obvi he is no longer a Republican or he wouldn’t be Democrats For Education Reform’s guy. But is there anything else that we can discern from a candidacy distinguished by a distinct blank slatey-ness and, um, change-a-bility? There’s this: while politicians fight each other, Cheung will fight for us, and not for the status quo. He’ll also fight *against political correctness,* according to a campaign email that he sent last week, which is ringing a familiar bell. Speaking of door-related sounds, is that the mailperson I detect, delivering another DFER-sponsored Cheung mailing to the home of a Somerville resident? Indeed it is! 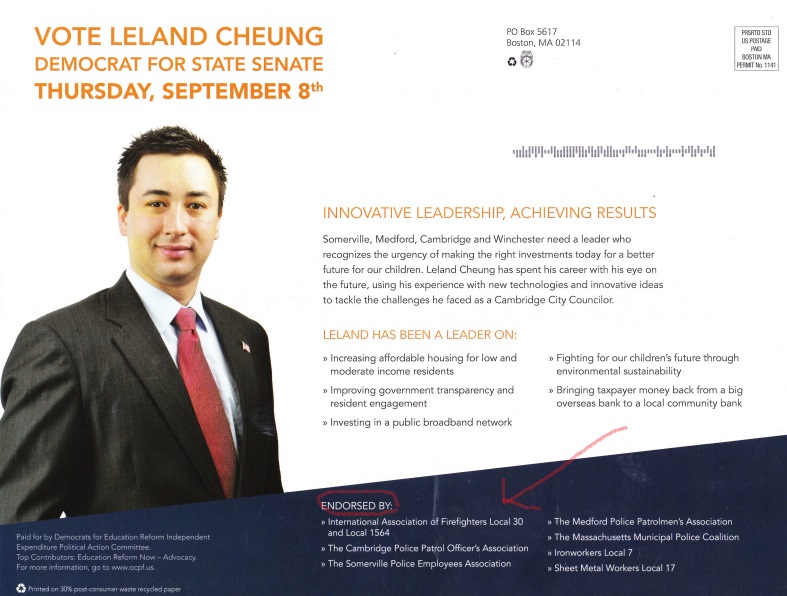 The right stuff
Of course it’s not just what your third party mailer doesn’t say, it’s who is buying what you’re not saying. And as DFER has helpfully listed above, Cheung has racked up an impressive list of endorsements from building trades and police unions. One notable backer: the Somerville Police Employees Association, whose members spent much of the summer demanding the removal of a Black Lives Matter banner from City Hall. This just in—the conservative editorial page of the Boston Herald, has endorsed candidate Leland Cheung because *Cheung seems to have landed on the right side of the charter school issue at a moment when that position is critical.*

Schooled
You see, the *status quo* that Cheung is not fighting for is the non-expansion of charter schools that Senator Jehlen represents. Or something like that. But while DFER likes to portray Jehlen as a tool of the teachers union, the reality is a wee bit more complicated. Jehlen, who is the vice chair of the 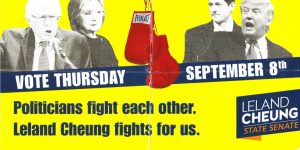 Joint Committee on Education, was part of the Senate group that took on the thankless task of trying to grapple with the intractable problem at the root of our charter school wars: how do you allow the continued expansion of charters without harming the 94% of state students who do not attend them??? Alas, the resulting legislation, which the teachers unions opposed, went nowhere and here we are today…

Jehlen is also involved in an effort to transform the way school quality is measured, so that it more accurately reflects what parents, students, teachers and communities value about their schools. The project got its start in Somerville thanks to Holy Cross education professor Jack Schneider, got the necessary state funding through the legislature thanks to Jehlen, and is now under way in nine school districts. Why does any of this matter? (And more importantly, why am I so excited about it?) Because if we move past the narrow fixation on math and English test scores, the whole debate changes and the *status quo* is upended. Which if I’m not mistaken, sounds a lot like education reform.

At last, a last question(s)
Alas reader, time is drawing nigh. The primary election is less than 24 hours away and we will know soon enough whether Democrats for Education Reform’s bold, gilded gambit to take out a progressive leader has in fact paid off. I am betting not but will leave it at that so as to avoid the jinx factor. But whatever the result, one is left with a question. Or two. Such as: what is a Democrat? And what is education reform? Somerville’s own Jack Schneider—take it away:

DFER aren’t really democrats and they aren’t really for education reform. Here in Massachusetts, they are working to unseat a progressive Democrat who has been an active champion of public education. DFER is a brand and a lobbying group. Like other brands, they seek to build associations that may not exist—in their case, an association with progressive politics and educational improvement. Their work as a lobbying group, however, sends a very different message about who they are. They are dark money masquerading as democracy, promoting a single-issue agenda—charter schools—and relying on the support of donors whose names they’d rather not reveal to the public.