New Orleans-style education reform is being touted as a model for other cities. But should it be?

As the 10th anniversary of Katrina approaches, we’ll be awash in claims that the replacement of New Orleans’ public schools with a market-based, all charter school system is a model for other cities. I aim to challenge this narrative with my own grass-roots style journalism. But I can’t do it without you!

This summer is the 10 year anniversary of Hurricane Katrina. But it also marks the start of an ambitious – many would say audacious – effort to break up New Orleans’ long-beleaguered public school system and replace it with a *market-based* system in which charter schools compete for customers, in this case students and parents, and for top test scores. Neighborhood schools are no more. In fact, some of the neighborhoods hardest hit by the hurricane have few schools at all. Instead, students spend hours crisscrossing the city on school buses to attend charter schools that virtually all embrace the same approach: long days, strict discipline and a heavy focus on test prep. And while New Orleans’ great education experiment remains highly controversial, what is indisputable is that education reform is helping to transform the Crescent City, into a richer, whiter city, as young *edupreneurs* flock here. 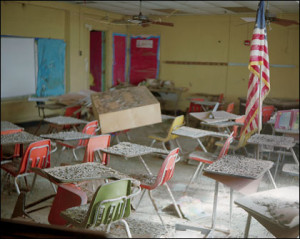 As the anniversary of Katrina approaches, we’ll be awash in claims that the makeover of New Orleans’ schools is a miracle. I aim to challenge this narrative with my own grass-roots style journalism. I’ve found that if you go to a place like New Orleans, talk to as many people as will talk to you, and really listen to what they have to say, you learn the kind of things that don’t show up in official accounts or sensationalist sales jobs. That’s why I’m asking for your help. Support my travels, research and writing, and I’ll do my part to get you the stories that no one is telling about New Orleans-style education reform.

Thanks for your help!
Jennifer

I’m partnering with Beacon Reader, which helps journalists raise money to support their work. You can read more about my project, and support my work (hint, hint!) here.