Writer Joanne Barkan argues that for plutocrats like Bill Gates, democracy is a nuisance…

Jennifer Berkshire: You’re the author of a recent case study on what you call Bill Gates’ *charitable plutocracy,* his years’ long, and many millions-ed campaign to bring charter schools to Washington State. In the interest of the data to which Gates himself is so committed, can you reduce your argument down to a series of numbers? Oh, and please speak in bullet points.

Berkshire: One digit missing from the tally above is the number nine. That’s the number of charter schools that are now open for business in Washington State thanks to Bill Gates’ extraordinary exertions. Sorry—my bad. We’re down to eight; one is back to being a private school again. Is it just me or does that seem like an astonishing amount of effort for a handful of schools?

Berkshire: In 2012, the Washington State Supreme Court handed down a school funding decision that said basically that *all means all*—meaning that when the Constitution says that *it’s the paramount duty of the state to make ample provision for the education of all children residing within its borders,* it’s not just referring to kids who live in wealthy districts. As a Washington resident who has been amply provided for, I’m betting Bill Gates must have been all over this court case.

Barkan: As far as I can tell, the mega-donors were never involved in trying to get the legislature to fund all public schools fully as the state Supreme Court ordered. It’s ironic that the McCleary decision came down the same year, 2012, that the initiative establishing charter schools just squeaked by. Then you saw all of this money from the Gates Foundation going to charter schools. And you had all of this public controversy, including the filing of a lawsuit maintaining that charter schools are actually unconstitutional in Washington. So while private money was going to what turned out to be just nine charter schools, the legislature wasn’t being made to follow the Supreme Court’s order.

Berkshire: It turns out that Bill Gates isn’t the only plutocrat to suffer from what I think of as school funding malaise. This survey by Northwestern researchers of members of the 1% found that school funding is one of the issues on which the wealthiest Americans are wildly out-of-step with the rest of us. 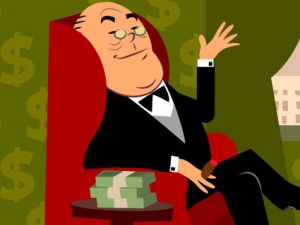 Barkan: There’s definitely a disconnect. Some of the wealthiest people in the United States have had an easy go of it. They started with wealth, likely went to private schools, and have no sense of what public education is and why it’s necessary. And, of course, there are also those who started with nothing and made their own fortunes. It seems that by the time they’ve made a lot of money, they’ve lost touch with the role of public education. The vast majority of the super wealthy send their own kids to private schools, which they do for a variety of reasons, including prestige. What’s interesting to me is that there are some states that have written into their constitutions that the primary obligation of state government is public education. When those constitutions were being written in the late nineteenth and early twentieth centuries, government was much more limited. We have a situation today where so many states are under tremendous financial pressure, and the first place they go when they have to cut is public education, as if public education were somehow an extra, as opposed to being a fundamental responsibility.

Berkshire: I was smitten by the subtitle of your article: *Bill Gates, Washington State and the Nuisance of Democracy.* What is it about democracy that plutocrats find so irksome?

Barkan: The plutocrats—people like Bill and Melinda Gates, Michael Bloomberg, John Arnold, or Eli Broad—have very set ideas about what they want to do. It doesn’t matter to them, or perhaps they just don’t understand, that their ideas may not be based on sound research or principles. They know what they want, and they come out of professional experiences where they’ve had complete authority. When they get to public education, they expect to be in control and to make things happen as quickly as if they were still running their companies. But as everyone should know, democracy  is slow, and it’s messy, and that turns out to be a great nuisance for plutocrats.

Berkshire: You share a remarkable quote from Gates about his frustrations with the results of his education reform work. *In the other areas we work, if we come up with a new malaria drug or a new malaria vaccine, nobody votes to uninvent our malaria vaccine.* Is there any truth to the rumor that Gates is now at work on a vaccine against the resistance to education reform?

Is there any truth to the rumor that Gates is now at work on a vaccine against the resistance to education reform?

Barkan: Sounds like deeply wishful thinking. Bill Gates made that remark in an interview with Gwen Ifill during a Gates Foundation event, and the audience laughed and clapped. It really was a good laugh line for him. But what struck me was the formulation of it: that he equated

opposition to his education reform ideas to *uninventing* an invention of his. First of all, he didn’t invent any of those ideas like charter schools or value-added modeling or merit pay. Second, to vote them down doesn’t destroy them because they can always be voted up again. Actually, when you think about it, Bill and Melinda Gates and the other plutocrats should know that very well because it took so many tries to get charter schools approved in Washington State. Supporters had to keep presenting the policy until they got it passed, and that’s the way democracy is supposed to work. In the United States, plutocrats distort democracy by pouring vast sums of money into political campaigns. The fact that it took the billionaires so very much money and so many tries to eek out a 50.69% to 49.31% victory shows how weak support for charter schools has been among Washington’s citizens.

Berkshire: You’re also the author of an article entitled *Got Dough? How Billionaires Rule Our Schools.* From whence does your antipathy towards the most successful among us STEM? Did I say STEM? I meant stem…

Barkan: To a great many people, criticizing philanthropists is like looking the gift horse in the mouth. On so many occasions, people who consider themselves liberals or even leftists will express exactly that attitude: leave those guys alone. Someone once said to me, *Leave Bill Gates alone. He’s doing good work in Africa.* There’s a sense that you shouldn’t criticize them because they’re generous and they’re using their own money. Of course, it’s not just their own money because of the immense tax breaks they get through their foundations. And setting public policy through the use of money from the top down isn’t the way a democracy functions. But it’s very hard for most people to look at it that way.

Berkshire: Well, I have some excellent news for you. According to a recent article in Inside Philanthropy, a new day in K-12 philanthropy has dawned, and it comes to us courtesy of none other than Bill Gates. Do you take back some of the things you’ve said?

Barkan: It’s true that the Gates Foundation, the Chan-Zuckerberg Initiative, and a number of other mega-ed-reform funders are enthusiastic about some newer initiatives like personalized learning, which means each student at a computer using education software at his or her own pace. These projects look to me like more of the usual ed-reform tunnel vision—*Eureka! We’ve found the silver bullet!*—and the usual top-down, know-it-all activity based on little or no sound research. Meanwhile, all the market-based reformers keep on keeping on. The Broad Foundation is trying to turn half of Los Angeles’s public schools into charters. Walton continues to push vouchers and charters. Equally important, state legislators are passing as many market-based reforms for *choice* and *accountability* as ever, perhaps more. The same fifteen-year-old education reform movement is making more gains at the state and local levels than it is suffering setbacks. So to answer your last question—nope, no retractions today.

Joanne Barkan is the author of Charitable Plutocracy: Bill Gates, Washington State, and the Nuisance of Democracy, which appeared in the April 11, 2016 issue of the Nonprofit Quarterly.