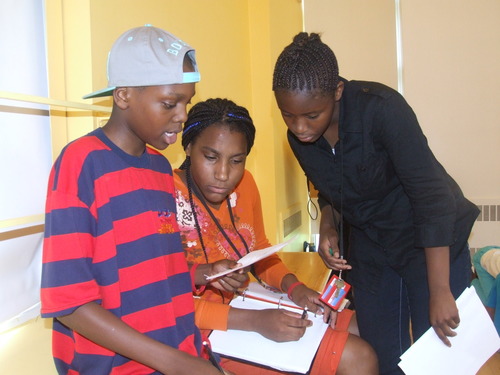 Lynn Cartwright-Punnett looks at advanced, extracurricular math in the same way that David Brooks looks at Italian deli meats: cultural capital standing between lower-income folks and entrance to America’s elite – but for her, it’s the world of hyper-charged mathematicians and computer scientists, not soppressata and the New Yorker, she’s working to equalize access to.

Ms. Cartwright-Punnett is the Director of Programs and Development for Bridge to Enter Advanced Mathematics (known simply as “BEAM”), a three-week summer math camp held at private colleges in upstate New York, tuition-free, for lower-income public middle schoolers from the city. BEAM serves hundreds of students per summer, offering them a choice of elective college-level math classes (combinatorics, anyone?) alongside high school standardized test prep.

I spent an afternoon chatting with Lynn about her background, her work, and her views on educational opportunity for socioeconomically disadvantaged, gifted students, an issue often ignored in a chaotic education policy climate.

Lynn’s views on education policy, like those of most Americans, are conflicted, fueled by contradictory identities. One identity is fervently pro-district public school: Lynn taught middle school math in a neighborhood New York City public school to non-English-speaking students with the kinds of parents who are most likely to be unaware of educational choice beyond their own neighborhood. Another identity recognizes the benefits of New York City’s choice-based high school enrollment system: BEAM helps its alumni earn admission to some of the city’s most selective public and private high schools, often tens of blocks from their own homes.

“Challenging” and “bureaucratic” is how Lynn found the teaching experience at her middle school, challenging because her students lacked common background knowledge in her math classes and bureaucratic because Lynn found little flexibility in deviating from prescribed curricula, neither for struggling students nor advanced.

Yet she found the students and families to be a silver lining.

Teaching “was really a pleasure, because most people who immigrate here are doing it for education, so everyone was there for the right reasons,” Lynn told me in an interview. “But I come from a background of enrichment math, and schools just don’t have time for enrichment.”

I asked Lynn to tell me more about enrichment in lower-income, urban public schools with high immigrant populations.

“I don’t think I realized this until later, but the attitude in low-income neighborhoods is that the strongest students will thrive on their own. And that’s just not true. We spend a lot of time [in education policy circles] talking about meeting minimum benchmarks. And that’s important – everyone should be on grade level. But the problem is, future engineers, mathematicians, physicists, just don’t come from grade level. They come from enrichment and acceleration,” Lynn told me.

The implication of the relentless push towards enrichment in STEM, earlier and earlier in students’ lives, is that racial and socioeconomic achievement gaps in STEM develop earlier as well.

The implication of the relentless push towards enrichment in STEM, earlier and earlier in students’ lives, is that racial and socioeconomic achievement gaps in STEM develop earlier as well. According to Lynn, upper-middle class students often have math and science gifted programs in as early as elementary school. And, outside of school, math enrichment websites, like “Art of Problem Solving,” are becoming de facto resources for students in the know.

But gifted students whose parents and schools otherwise lack the knowledge and cultural capital about these types of resources?

“They’re left behind,” Lynn says. “I think I was a bit brainwashed by the conversation about education in low-income communities when I was teaching. And I would have students in my room who would race ahead, and I never knew what to do with them, and I sort of figured they’d be okay on their own. And I’d put more energy into the middle student and the low student than the high student, which I really regret.”

Lynn decided to make those high students her career, becoming a founding leader of BEAM following a brief stint as a museum educator (“museums are the sexiest part of education,” Lynn says).

BEAM’s admissions process, which measures a balance of “persistence” and “potential,” comes at a critical point in students’ development: middle school is, according to Lynn, the point when truly advanced STEM students emerge, both in terms of interest and in terms of ability. At the same time, many BEAM students come from middle schools which offer a “general” curriculum; that is, no enrichment, leaving a bank of STEM potential in some students untapped.

“Most BEAM students come from a mix of district public schools and charter schools,” Lynn told me. “We’re very agnostic on the issue beyond making sure charters don’t tip past a third of our students, since charters only represent about 10% of the middle schools in New York City, and we’re trying to fairly represent the city.”

Many BEAM students end up in high schools that look vastly different from their middle schools. One of BEAM’s missions is to arm otherwise disadvantaged, gifted students with the preparation and information to succeed in New York City’s high school choice process, which is notorious for its bias against lower-income, non-white students. As a result, it isn’t unusual for a majority-minority cohort of BEAM students to end up in the city’s whitest, wealthiest high schools. For Lynn, that dynamic comes with its own baggage.

“I think the school choice system only works if all of the options are good. And right now, we know that school quality differs so significantly. And most parents don’t have the resources to evaluate school quality. Parents look for proxies of quality, like discipline, and they’ll tell me they want, say, a school that requires uniforms,” Lynn told me. “So, when we talk about school choice, if parents aren’t given guidance, and there aren’t enough good choices for every child, then the whole system doesn’t make sense. I mean, we love it because we can navigate it. And schools know who we are, and we have credibility with, say, recommendation letters. But that’s so different from what most parents have.”

Even regardless of school choice, Lynn’s clearly tapped into a niche. “We talk about college and career readiness a lot. But that’s not the same thing as STEM college readiness and STEM career readiness. And that’s what we’re trying to get a handle on,” she says.

Lynn’s work – BEAM’s work – comes at an inflection point in the American workforce, where a variety of fields are diversifying by race and gender, and yet, STEM fields remain stubbornly behind. A 2015 U.S. News/Raytheon poll found that “while STEM bachelor’s degrees earned by black college students rose 60 percent from 2000 to 2014, that share shrunk compared to the overall number of bachelor’s degrees earned  by black students. Meanwhile, the portion of STEM degrees awarded to white students grew 10 percent compared to the number of bachelor’s degrees earned by white students overall.” Meanwhile, Lynn reports that every BEAM student so far who has begun college in a STEM major has stayed in the field.

And while Lynn waits for public schools and private industry to catch up, BEAM shows no signs of stopping, launching in Los Angeles next year.

Emil Friedman was a summer intern at Have You Heard and is now back at Yale University, where he is a columnist for the Yale Daily News.