The Springfield Empowerment Zone is light on results, heavy on hype and rife with red flags…

Barely had Massachusetts voters cast the last *nay* vote on raising the charter cap, aka the Last Big Thing, than the Next Big Thing was sweeping the Bay State. I speak, of course of the zones of empowerment, that suddenly have everyone who is anyone talking. The experiment in school turn around-ing underway in Springfield, headed up by education reformer magnate Chris Gabrieli, is now in its second year and has already put up impressive numbers. No reader, not the measurable results that were the occasion for the takeover. I mean *buzz* as they say in the biz. There’s Boston Globe sage Scot Lehigh singing the Empowerment Zone’s praises. Now here’s Chris Gabrieli singing his own praises. Here’s Governor Baker giving the EZ a shout out and proposing a statewide expansion. Here’s the Globe editorial page echoing the Governor’s call. Now here’s the front page of the Globe reporting on the growing momentum behind the Empowerment Zone crusade. Oh, and here’s Representative Alice Peisch, fresh off her turn as lead flog-stress for the Last Big Thing, filing the *enabling legislation* that will empower the growth of zones across the land.

Empower failure
Close readers of all of this positively positive press will notice an, um, curious omission. Why is there no mention of whether the Empowerment Zone is actually doing the thing that it was zoned to do: rapidly accelerate achievement, meaning test scores, at the EZ’s eight schools? You didn’t miss anything; there has been no rapid acceleration. When Governor Baker cited *positive results* in his State of the State address he was venturing into the land of, if not alternative facts, extremely wishful thinking. As Gabrieli conceded in a letter he sent to *interested parties,* *none of our schools reached our two-year goal of 50 median SGP in both English Language Arts (ELA) and math.* *The scores are dreadful,* one source told me (we’ll call him @Alt_DESE). *There really wasn’t any improvement after year one of the EZ.*

Suspending disbelief
Than there are the numbers that Gabrieli and Team EZ aren’t talking about at all: the eye-popping suspension numbers at the Empowerment Zone schools. To put it bluntly: The EZ schools are suspending the crap out of their students. Here’s a little perspective for you. The top suspending school in the state last year was City on a Hill in New Bedford, a no-excuses charter school that suspended 37.9% of its students, followed by Roxbury Prep at 28%. If the state included individual district schools in its tally, the Empowerment Zone schools would round out the top ten. Here’s Van Sickle at 31%, Kennedy at 30.2%, Chestnut North at 26.5%, Duggan at 25.7%. It gets even worse when you dig down further and look at who is getting suspended. The Empowerment Zones schools are suspending a higher percentage of students with disabilities and African American boys than virtually any other schools in the state. That something is going wrong here shows up in another data point that zone boosters never mention: chronic absences. The kids have stopped showing up at school. 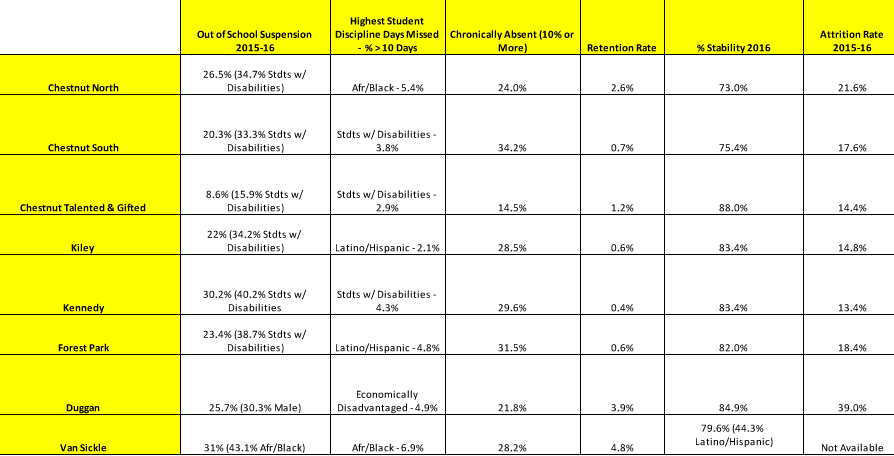 A different system for a different outcome
Let’s pause here briefly for a spot of context, to familiarize ourselves with the origins of the Empowerment Zone concept. Strip away the Third Way rhetoric about empowering empowerment, and the Empowerment Zone is a familiar beast. It’s the latest iteration of the achievement district craze that’s been sweeping the country since Katrina swept through New Orleans, blowing away the unions and the bureaucracy that was holding kids back, ushering in a system that now spends more on administration (and less on teaching) than before the storm. And while New Orleans gets most of the ink, Zone boosters would do well to study some of the high-profile failures spawned in NOLA’s wake as they will quickly detect some familiar themes. 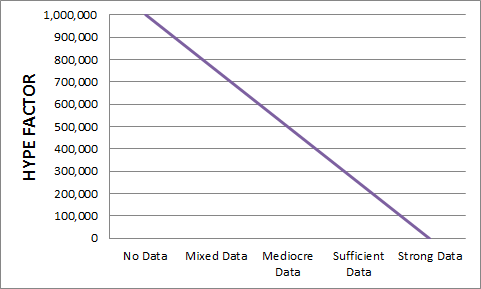 Like Eli Broad’s botched effort to build *a different system for a different outcome* in Detroit in 2012, aka the Education Achievement Authority or EAA. I spent last week combing through thousands of emails about the EAA that a dogged state rep and a local professor got their hands on, and the parallels between Broad’s experiment and Gabrieli’s are hard to miss. The data was awful, the red flags—like high disciplinary rates and students *voting with their feet*—getting redder all the time, and yet the PR side of the operation powered on, abetted by a gullible press and a plethora of highly-placed boosters. Even as alarm bells sounded from within the education laboratory, the 15 schools scooped up by the EAA, its emissaries were traveling the country, touting the miracle. Meanwhile momentum was growing in the legislature to expand the EAA statewide. Lawmakers, especially those funded by our new Secretary of Education, smelled an opportunity: to privatize schools, undercut democratic school leadership and neuter the state’s teachers unions.

Theory of change, unchanged
Alas the story didn’t end happily; the schools that the state doesn’t close will rejoin the Detroit Public Schools this fall, the *interlocal agreement* that made it happen dissolved.  But what education reformers refer to as the *theory of change* that gave rise to the EAA remains unchanged and is shared by the education changemakers who are changing things up in Springfield. A Detroit teacher described the theory to me this way: Black and brown kids aren’t ready to learn; their teachers aren’t ready to teach them. This is why those suspension numbers at the EZ schools are so high; remaking the kids’ characters is a messy business. It’s why Empower has put so much effort into constructing a *human capital pipeline* to stock Springfield’s classrooms with fresh new teachers, who come via Teach for America, which recently expanded into Western Mass, or Empower’s own Teach Western Mass. Veteran teachers are harder to convince that suspending students is the way to *build the skills they need to achieve their goals.* Hence the call for *high quality teachers,* no teaching experience required.

Measuring success
Here’s a question for us to contemplate as we finally reach the conclusion of this post. How will we know when the Empowerment Zone has succeeded? A new  *report* on the Zone’s success concedes that it’s too early to tell whether the EZ is working, but argues that the true test of success will be growth

—not the student growth percentile kind but the expansion of the zone idea itself. Based on this metric, the Empowerment Zone concept could soon become very successful. In Springfield, the Zone just absorbed its ninth school and, according to the report, could conceivably take over all of the schools in the district. Meanwhile enabling legislation filed last month by State Rep Alice Peisch would allow any district with a single Level Four school to be declared an Innovation Zone, overseen by an appointed board of directors who can then contract with outside management companies to run the schools.

Good morning, sunshine
While we wait to see how things play out in Springfield, maybe EZ boosters should take a trip to visit Boston’s Dever school, site of a disastrous outside partnership with a Gabrieli partner, Blueprint Schools. Boston recently ended the much-hyped arrangement and will soon resume control of the school, which is in worse shape than before Blueprint took it over. Field trippers can prepare by taking in Blueprint’s most recent take on its success at the school, filed with the state just two weeks before its relationship with the Dever ended, and filled with the kind of sunny jargon that professional turner arounders traffic in. Even as suspension numbers spiked up near EZ territory among students with disabilities, the stock photos of the kids on the Dever website smiled through it. And when teachers abandoned the school in droves, sorely testing the network’s *human capital* pipeline, Blueprint responded the only way it knew how. No, not by adjusting the theory of change that underlies all of these efforts, but by setting up a Sunshine Committee to boost employee morale…

Thanks to Cleo Hereford for assistance with graphs. Send me your thoughts at jenniferberkshire@gmail.com. And follow me on Twitter at my new spot: @BisforBerkshire.