A Boston student explains the connection between high-stakes testing, harsh discipline policies and the school-to-prison pipeline… 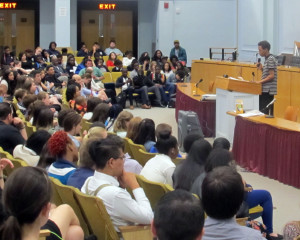 De’Anthony Robinson addresses fellow students at the Statehouse. Robinson and his classmates won this year’s Generation Citizen Changemaker award for their research into harsh discipline policies and how they push kids into the school-to-prison pipeline.

I am De’Anthony Robinson and I am a student at Brighton High. I am just weeks away from graduating from high school.  I am incredibly proud of that.  But as I travel back and forth across the city for school every day, I see many of my friends who are not going to make it.  Out of all of my childhood friends, only two will graduate.  Like many young people of color in this city and country, they are struggling to finish school.  They feel alienated from their education because of issues like high stakes tests, unfair discipline policies and schools that just don’t help them feel successful.  My friends are not on a good path in life and there are so many that others like them.  In fact only 59 percent of young black men graduate from high school and only 65 percent of young Latino men graduate. One out of every three black men and one out of every six Latino men will serve time in prison.

Naming the problem
Four months ago, while I knew my friends were struggling, I had no idea their struggle had a name.  I know now that they are caught up in the school-to-prison pipeline. Because of the Generation Citizen program I learned not only the name of this issue, but also the complex causes and major effects that are impacting my generation and my community. 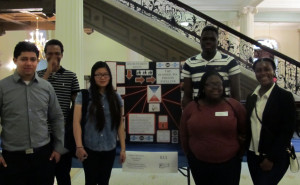 De’Anthony Robinson and his classmates at Brighton High School show off their award-winning research.

As my classmates and I began our research on the school to prison pipeline, I began to see my own experiences and reflect on how I could have been caught up in the cycle. There are so many complex issues that push young urban youth away from our schools.  Two issues that I relate most to are the impact of standardized testing and harsh discipline policies.  I have been taking MCAS my whole life, and it never helped me improve my grades or my attitude about school.  It made me feel anxious and like a failure.  A multiple-choice test has never been able to measure my true capabilities or my desire to succeed.  It only made me and my urban peers appear less intelligent than I knew we were.   I was able to pass MCAS to graduate, but others were not and eventually dropped out.  Now the state is looking to adopt a new test called PARCC and the same problems will definitely occur.  These types of tests make kids feel overwhelmed and disconnected from school.

I feel just as strongly that harsh discipline policies push kids into the school-to-prison pipeline. In my twelve years in school I have witnessed and felt the sting of zero tolerance policies that seemed to make no sense.  For example, when I went to City on a Hill charter school, I was excluded from class for not having a pencil.  I received detention for having my shirt un-tucked and was sent home because I forgot my belt.  Eventually, I was so frustrated with these kinds of rules that I decided to transfer.  I knew I was smart and capable, but these strict rules were getting in the way of my education.  In public school, I have felt the impact of school police and metal detectors

Keeping students safe—but from who?
Every day, I enter the school building feeling like a criminal.  I know the intention is to keep us safe—but from who?  From each other?  The expectation seems to be that young black and Latino students are already dangerous and not coming to school for an academic reasons.  If we continue with this idea that all urban kids need is strong discipline, then we will have nothing more than this cycle that pushes young people into the school to prison pipeline.

If we continue with this idea that all urban kids need is strong discipline, then we will have nothing more than this cycle that pushes young people into the school to prison pipeline.

*I could have been there too*
I could have been there too.  I could be the statistic that people see. A young black man, living in the projects born to a teenage mother who struggled every day to make the best life that she could.  If you were to look at my *data*—things like test scores and number of the suspensions— you might not even want to meet me.  And you definitely would never expect that I would give a speech at the Massachusetts State House.  Please keep me in mind the next time you look the numbers and data about young black men. Please remember that what we have to offer the world is way more than the numbers show.  But just because I have been able to persevere, does not mean that everyone else can.  They need help.  Listen to urban youth.  Help us have our voices heard.  Take action to end the school to prison pipeline.  If ALL of you begin to question the insanity of zero tolerance policies and high stakes tests, Massachusetts can be the leader for REAL education in the United States.

De’Anthony Robinson is a member of the class of 2015 at Brighton High School. He and his classmates received the 2015 Generation Citizen Student Change-Maker Award for their research into the school-to-prison pipeline and its connection to high-stakes testing and no excuses style discipline.