Stephanie Rivera talks teacher prep, the importance of a diverse teaching force and why, if you want her to stop teaching, you’ll have to carry her out of her classroom… 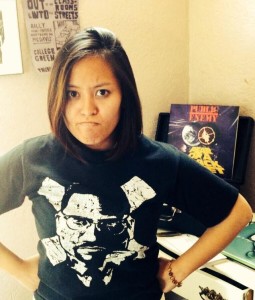 Edushyster: You’re about to begin your student teaching through the teacher prep program at Rutgers. Since we know for a fact that teacher prep is useless, why did you choose this particular path?

Stephanie Rivera: I don’t think that teacher prep programs are useless. In fact I’d argue that they do a much better job preparing us to be in the classroom than some of the alternatives that are out there. I’ll be spending the fall student teaching, then in the spring I’ll be working on a community project with a school in New Brunswick. I’ll be helping students do research and acquire the skills to bring about change in their community.

ES: One of the things that amazes me about you is the strength of your conviction that an urban classroom is exactly the right place for you. Are you ever plagued by secret doubts that you’re not sharing with us on Twitter?

SR: As a matter of fact I almost dropped out of school when I was a sophomore. I started to learn about the inequality that exists between different schools and different communities and it became very meaningful to me. I decided that I would drop out and go and work with the Philadelphia Student Union. Fortunately I talked to one of my professors of urban education. He really helped me to see that getting my teaching certificate and going into the classroom is the best route for me in terms of trying to make real change. He kept me on track and I’m really glad he did. 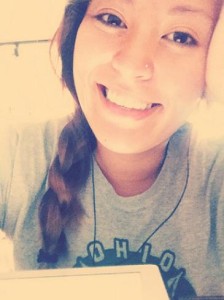 ES: You’re one of the most prominent student voices in support of strengthening public education, yet when I hear you talk about what moved you to want to teach, you mention the same things that often inspire students to join, say Students for Education Reform. What’s different about your point of view?

SR: The funny thing is that when I was trying to figure out what I could do, I googled *what can students do?* and Teach for America came up. But then I did the research and it didn’t take me long to figure out that TFA and SFER and all of these reform groups not only didn’t ally with what I wanted to do, but undermined the kind of change that I really cared about. How can you claim to want to close the achievement gap and address educational inequities when you’re funded by corporations whose missions go against that? And I want to be a life-long teacher, not just stay in a community for two years. It drives me crazy when people ask me *what do you want to do after teaching?* My response is always: *What are you talking about? I’m going to teach until I can’t walk anymore!* 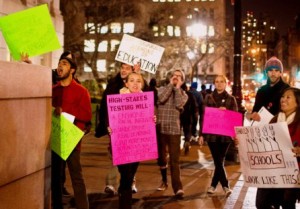 ES: You led a social media campaign last year called #ResistTFA that really caught fire. I wonder what you think of TFA’s effort to diversify its corps.

SR: I still have major issues with TFA but they’re bringing teachers of color to students who may never have had that before. It’s really hard to be against that. I think that what TFA is doing should serve as a challenge to teacher education programs to make serious efforts to attract more students of color to the teaching profession. This is a class issue too. Teaching isn’t accessible to low-income students. For example, we’re advised not to work while we’re doing our student teaching, but we don’t get a stipend. It’s basically an unpaid internship. Students who are already struggling to pay for college can’t go into the field because it’s not affordable. EdTPA, the Pearson assessment that student teachers will have to pay $300 to pass before they can get their teaching certificate, is another way of discouraging poor students, who are predominantly students of color, from entering the teaching profession.

ES: You wrote a terrific post called Advocacy in the Age of Color Blindness  where you challenged the idea that it makes no difference what color a teacher is as long as s/he’s great. I’m amazed that it’s even necessary to argue about this, but the *best and brightest* first mentality seems to be gaining traction.

SR: The whole argument that if students are succeeding and all of their teachers are white then it’s OK to have all white teachers really misses the point. First of all, how are we measuring student success? Is it all test scores? Because raising test scores isn’t the only role of a teacher and it shouldn’t be. What do students learn from having teachers who look like them? I really believe that when students of color see teachers who look like them in these great professions it sends a powerful message that *hey, I can do something like that too.* It’s also about the ability of teachers to understand where their student are coming from. 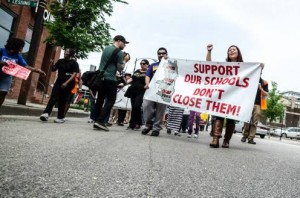 ES: As a soon-to-be teacher I wonder what you think about the brewing battle over tenure.

SR: I strongly believe in teacher tenure because it protects teachers who have a more political understanding of what teaching is about. I really think that we need to be having some serious discussions in our teacher education programs about what tenure is. Future teachers don’t understand what it is, what it does and where it came from. Tenure does more than just provide job security. It allows you to speak out against things you think are wrong. It allows you to have a progressive curriculum. People who are going into teaching need a bigger, broader understanding of tenure.

ES: So I’m using my extensive powers to grant you the authority to make one really substantive change to teacher education. What would it be?

SR: I’d add more diversity education. The fact that so many veteran teachers come out of these programs thinking that race isn’t important reflects a flaw in the way we train teachers. I know that here at Rutgers we have one class where we talk about the different cultures we may be teaching. And what a lot of my fellow future teachers take away from this class—and I find this so frustrating that it gives me chills just talking about it—is that the whole point of the class is to make them feel guilty. But that’s not the point. The point of diversity education is to help us understand the systemic and institutionalized racism that exists within our society and how it affects our students who come through that. The goal of classes like this should be to compel future teachers to want to fight for a better society so that students don’t have to experience this kind of racism. 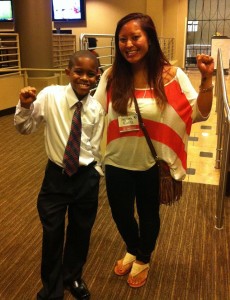 ES: I know so many veteran teachers, including one to whom I happen to be related, who have basically forbidden their own children from becoming teachers. You’ve fought back against this.

SR: This is a view that really bothers me and that I think we need to challenge. If everyone who genuinely cares about students quits, who are we leaving teaching to? The profession is going to be filled with people who have a corporate reform mindset. Many of us have a better vision of what our schools like, what our education system should look like, and we’re the ones who should be in the classroom, fighting the fight—not giving up.

ES: This isn’t really a question. I just want to say that even though I already thought you were pretty much the coolest person in the world, this interview has solidified that view. Can I move to New Jersey and just follow you around?

Stephanie Rivera is a student in the Rutgers Graduate School of Education. She blogs at Teacher Under Construction and tweets @stephrrivera.