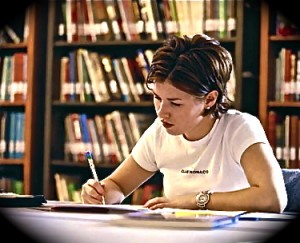 It is an annual rite of almost unimaginable cruelty. Thousands of young hopefuls attempting to beat long odds. For the lucky few who win this life lottery, there awaits a coveted seat at a no excuses school known for high expectations and some of the nation’s best teachers. But only a tiny minority will get a shot at a better future. I’m talking, of course, about the huge number of Teach for America alumni who are even now applying to the nation’s top law schools.

A new study of teacher retention in Los Angeles has found that five out of six TFA recruits leave their classrooms after two years, taking their excellence with them. But inquiring minds want to know: where do the TFA-sters and their high expectations hope to go next? At last we have an answer. Reader: their Eden is a place that I like to call New Haven, Connecticut, home of Yale Law School.

But alas this is a tale every bit as fraught and overly dramatic as “Waiting for Superman,” for you see there are now so many TFA alumni applying to attend Yale Law that they are literally cancelling each other out with their own excellence. I learned this thanks to an EduShyster premium reader who put down her wine box long enough to send me the following, inadvertently hilarious blog post in which a Yale admissions coach addresses what she terms the TFA essay problem. Let’s read it together, shall we?

In this post I am going to address the TFA Essay, meaning essays written by students who are applying to law school from Teach for America. The TFA Essay follows a fairly predictable model, to wit: bright, ambitious, public service-minded college graduate decides to do TFA to make a difference in the world. S/he spends hours and hours preparing the perfect lesson for the first day of school, only to find that the first day doesn’t go anything as planned. Things go downhill from there. The problems are epitomized, usually, by one very troubled student, [insert name of student here (we’ll refer to her as Tanya)], who is bearing the brunt of one or more inner city/rural social ills (surrounded by drugs/violence/gangs, single-parent family, poverty, etc.), is pratically illiterate/cannot do math, and a troublemaker in class, to boot. After a period of disillusionment and struggling to control the class, TFA applicant tosses original lesson plan out the window, works around the clock to connect with the students in new and original ways, and even makes a breakthrough with Tanya. The applicant’s efforts are rewarded when the class, including Tanya, passes the state testing requirements, advancing three grade levels in reading/math. The students may or may not stand on their desks and recite “O Captain! My Captain!” The whole experience, while rewarding, makes the applicant realize that real change can only be effected at the policy level, and so s/he is applying to law school in order to enter the field of education policy.

And here’s where our story takes a sad turn. Tanya, seeing her TFA-ster role model drop out, decides to drop out too. Did I say sad? I meant tragic. According to the admissions coach, of the 3000 people who apply to attend Yale Law every year, a full 10%, or 300, come from TFA. And because this cohort is invitably excellent and has many outstanding qualities and “Yaleability,” the only outcome that can possibly result is TFA triage.

This is Hunger Games time, people. I can coach you, train you, and give you all the insider tips I can, but once you’re in the faculty arena, you’re on your own. And if your essay is the same as 20% of the files you’re competing with, the good-hearted but slightly overwhelmed and possibly confused faculty member may feel that s/he needs to triage the TFA applicants—who could appear, to some extent, to be interchangeable in terms of interests and experience.

So what then, reader? What happens to our would-be-reformers, whose hopes are dashed by the cruelty of TFA triage. Well, I know it isn’t much but they could always go back to teaching…