At a growing number of urban schools, it’s all testing, all the time 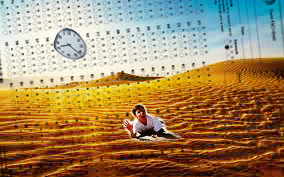 Remember how just the other day you were despairing that public education has devolved into a sad synonym for testing of the standardized variety? Well I’ve got great news, reader—it turns out that you were wrong! According to a new study by an organization called Teach Plus (that I’m guessing you’re not a member of), American students don’t spend nearly as much time on testing as you do complaining about the amount of time they spend on testing.

Teach Minus
I couldn’t wait to share the good news with my disgruntled teacher friend whose Massachusetts school is being turned around as I type. (No, not that school. No not that one either. THIS school). Sadly I cannot print her remarks here as they were laden with expletives and this is a family publication… According to Teach Plus, students in Boston spend an average of 17.2 hours a year being tested on math and English skills. In other words, what’s everybody complaining about??? Except that that figure not only excludes the amount of time that teachers spend preparing students for those tests, it also leaves out the practice tests that students at a growing number of urban schools now spend an inordinate amount of time taking. This just in: Report on Student Testing Time Concedes Major Errors. 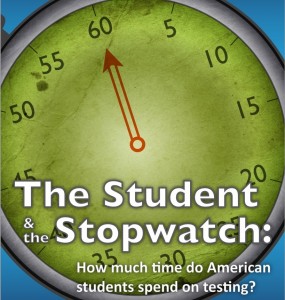 Test Plus
My friend’s school is part of a network of achievement boosting called ANet, which we first encountered here. Because students at the school, many of whom are still learning English, have failed to increase their *achievement,* the school will likely be taken over by a *proven provider* unless enough students learn to color in the correct bubbles before they take Massachusetts’ high stakes test—or the super cool new PARCC exam—this spring. And so with the aid of a great many ANet consultants, the students take eight practice tests a year, clocking in an additional 16 hours to prepare for the tests that count and which Teach Plus (Test Plus?) actually counted in its study.

Data driven insane
But that doesn’t begin to factor in the amount of time that the teachers at my friend’s school spend preparing students for the tests that will prepare them to be tested this spring, correcting and grading the *open-response* essays they write, and, most importantly, analyzing the data that the practice tests produce in hopes that understanding why so many students bubbled the wrong answer on the practice tests will lead to more students bubbling in the right answer on the for-real tests this spring. Got it? In fact, teachers at the school are so focused on *driving student achievement higher* that they’ve given over all of their professional development and most of their curriculum planning to ANet-related data analysis. And don’t forget the kids! Their practice test scores get displayed with their school ID numbers so that they can measure their *achievement* for themselves.

ANet Gain
So how is all this working out, anyway? Great—for ANet that is. Since we first encountered them last year ANet’s growth, like the very arrow in its logo, is rocketing steadily upward. ANet is now helping partner schools in seven states and the District of Columbia turn *best practices* into *test practices.* And they’re posting some impressive digits: 66 schools in Boston alone, 75 schools in DC, 63 schools in Louisiana. Of course, all of this achievement driving doesn’t come cheap; schools pay ANet $25,000 each. (Helpful hint: even urban schools with bare-bones budgets can easily afford $25K by letting go teachers of non-essential subjects like social studies or art). But is there anyone who can help ANet *scale up its impact*??? More great news, reader. Former Fidelity Investments honcho Peter Lynch recently kicked in a pretty penny to help ANet expand to even more Boston schools. No word yet on when ANet will reach the swanky suburbs… 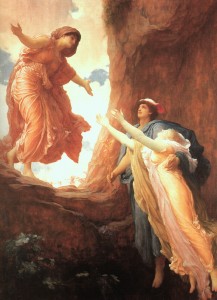 The final test
I’d love to stay and chat, reader, but it’s test time—again—and these bubbles aren’t going to pencil themselves in. I leave you with an actual ANet question, but first read the following short passage about how ANet tests are constructed. In short, they are cobbled together from a mishmash of tests from other states and are known for inspiring teachers to reach for such ELA vocabulary classics as *obtuse,* *incomprehensible* and *absurd* when describing them. In my favorite recent example, middle schools students were asked to read the myth of Persephone and Demeter, as retold by Ingri and Edgar Parin D’Aulaire. Well here—I’ll let ANet explain it to you:

Before the emergence of modern science, cultures produced stories to explain the actions of supernatural forces, such as gods, as well as natural events. Read the passage from the Greek myth, “Persephone and Demeter,” and then answer the questions that follow.

What is the theme of the passage?
A. Always avoid strangers
B. Do not disobey your elders.
C. All actions have consequences.
D. Do not mourn the loss of a loved one.
E. Test prep is a highly lucrative trade.