Professor Joan Goodman, the director of the Teach for America program at the University of Pennsylvania, talks about the philosophy behind *no excuses* charter schools, and the price paid by students who attend them. 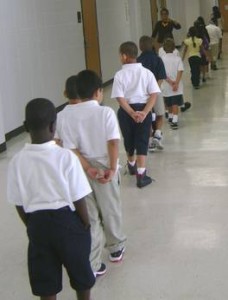 EduShyster: You’re the author of an article called Charter Management Organizations and the Regulated Environment: Is It Worth the Price? that’s the single best overview of *no excuses* charter schools that I’ve seen. Talk a little about the research you’ve been doing.

Joan Goodman: I began to focus on charter schools when the first Mastery Charter School was started in Philadelphia. These were supposed to be experimental schools which would have a variety of new approaches and they’d get rid of bureaucracy and we’d see all kinds of novel approaches to children. But particularly in terms of the charter management organizations they haven’t provided much variety—they’re all strikingly similar to one another. These schools have a very clear philosophy about what they’re trying to do, how they’re trying to do it, what they think is necessary, who they read, who their leaders are. And they’re explicit in describing it. The combination of the uniformity across these different schools and their explicitness about what they’re doing and why they’re doing it makes it easier to get hold of this movement than it is with say, public schools in a city or a school district where there’s so much variety and there isn’t a single philosophy. END_OF_DOCUMENT_TOKEN_TO_BE_REPLACED