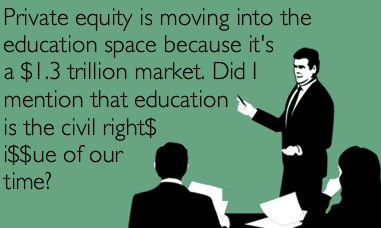 By now you are almost certainly aware that the specimen known as the EduShyster (or homo educandus shysterus as he prefers to be called after a few Pimm’s Cups–see below) is consumed by a single all consuming question: How can I help to close the achievement gap? How can I make some @#$% money off of these little bastards? And yet as the EduShyster and his eduvestor colleagues can testify, making money off of our guaranteed right to a public education is not easy. There exists a shameful “investment gap” between the rich profits that the EduShyster knows are lurking within the classrooms and hallways of our public schools and the green stuff he has so far been able to extract from the system. That’s why I was so relieved to learn that a special conference is being offered just for eduvestors like us. END_OF_DOCUMENT_TOKEN_TO_BE_REPLACED