Around the 20 minute mark of Arne Duncan’s talk, I began to choke. I’d made it through Duncan’s endorsement of Question Two, the ballot initiative to lift the cap on charter schools in Massachusetts, and the occasion for last week’s *Education Party* thrown by Democrats for Education Reform. It was when 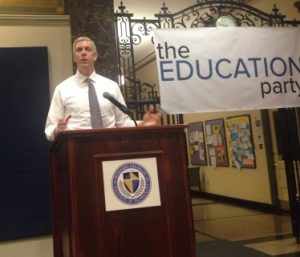 Duncan started to talk about the need for school reformers to genuinely engage parents and families—*I’m not talking about astro-turf*—that the dryly bitter chuckling sound I’d been making escalated into something more profound. You see, that very morning, the Boston Globe had run an expose on the *family* at the very center of Question 2: a husband/wife team of GOP operatives who have orchestrated seemingly every aspect of the campaign.

There are other families involved, of course. Like Republican philanthropists Seth Klarman and Joanna Jacobson, whose largesse got the multi-pronged effort to lift the charter cap rolling, and who are referred to in the trove of internal emails the Globe made public as Klarman and JJ. And there is Families for Excellent Schools, whose CEO, Jeremiah Kittredge, is CC’d on all of the emails, along with a small army of lobbyists, PR hacks and the heads of a handful of Boston charter schools. An exemplar of the new *parent power,* FES was transplanted here from NYC, thanks to the aforementioned largesse of the aforementioned families, to marshall an army of parents behind the effort to lift the charter cap. The group quickly became known for such innovative marshalling techniques as automatically enrolling parents whose kids attended Boston charter schools in the parent army. END_OF_DOCUMENT_TOKEN_TO_BE_REPLACED