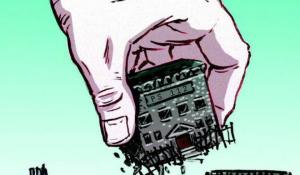 When the city of Chicago shuttered some fifty neighborhood schools last year, officials invoked antiseptic-sounding words like “underperformance” and “underutilization.” But visit neighborhoods that bore the brunt of the closings, as I did recently, and you’ll hear that the battle over the city’s schools is about something much larger: the future of the city itself and who gets to live here. Parents, teachers and community leaders told me that the replacement of neighborhood schools serving the city’s poorest children with privately run charters that don’t, can’t be separated from the relentless gentrification that’s rapidly transforming Chicago into a wealthier, whiter city. Think urban renewal but without the bulldozers.