From the impact of school closures to the perils of an all-charter system, Boston students seem to know a lot more than the adult interests… 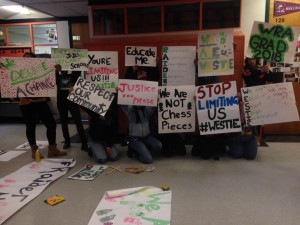 It’s sad when adult interests decide to close schools 🙁 Which is why I took it upon myself to be the bearer of great news to the students protesting at last week’s School Committee meeting. So your old schools are going out of business. Lots of shiny high-performing seats are headed your way! And even greater, those high-performing seats turn out to be even higher performing than we thought. But there was a rub. These students turned out to be, well, educated on the topics at hand. From the impact of school closures to the perils of an all-charter school system, the students seemed to know a whole lot more than, say, this guy. What do you say we listen to them?

Savina Tapia, 11th grade, Boston Latin Academy
I went to a charter school, Roxbury Prep, and I was basically forced out because I didn’t fit. The school was like prison. Dead silence in the hallways—zombie, uniform, robotic. It wasn’t a high-quality learning environment. It was just work, work, work and stress. A lot of the kids in our class didn’t end up graduating. If you really think charter schools are working, look at how many kids drop out or transfer.

Vanessa Villanueva, 10th grade, Madison Park High School
If education is so important in Boston, what is the point of closing the schools? Making them into charter schools is just going to make people want to drop out. My cousin goes to a charter school now and she doesn’t want to be in high school because they’re too strict. They kick out everybody. I hear people at my school say that *if this becomes a charter school, I’m dropping out.* That’s just not something that should happen.

Leanne Allen, 9th grade, West Roxbury Academy
Students matter. We’re the future. And if you just kick us to the curb you’re telling future generations that when something gets tough you just get rid of it. 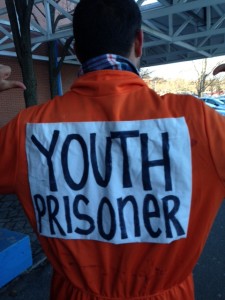 Ian McSorley, 11th grade, Boston Green Academy
Dorchester High has been practically abandoned for decades. It’s been a cesspool of failure since the 80’s, and because of that no one wanted to put money into it. And look what happens: less funding equals less quality education. If you don’t put enough money into a school, of course the test results are going to be lower, of course you’re going to have dropouts. If people actually put investments and time into the public schools they wouldn’t need to be made into charter schools. I’m very anti charter school because I don’t like the way charter schools treat children. They don’t treat us with respect as human beings. They treat us like little baby cattle. They expect us to abide by their rules, and because they’re a charter school they get to set up their own rules.

I’m very anti charter school because I don’t like the way charter schools treat children. They don’t treat us with respect as human beings. They treat us like little baby cattle. They expect us to abide by their rules, and because they’re a charter school they get to set up their own rules.

Deross Jordan, 12th grade, Dorchester Academy
Public schools are working. Having charter schools means a privately run educational system that teaches kids only to pass tests, not to be part of society.  I went to the Boston Renaissance Charter School from K-4th grade. Traditional public schools are a friendlier environment; I feel like I learn easier in a public school. I wasn’t being taken care of in the charter school. 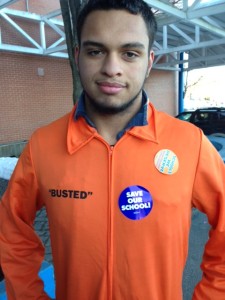 Jahi Spaloss, 11th grade, Boston Green Academy
Test scores shouldn’t determine where students go in life. If I get a low score on the MCAS, that shouldn’t say *oh—you’re not going anwhere.* But that’s what BPS is telling these kids: if you don’t get a good score on these tests, you’re not going to go anywhere in life. We shouldn’t see the solution as making every school a charter school. We should be trying to figure out why there is a problem and working to fix it. What’s going to be next after the charter schools fail? Are you just going to keep closing schools, over and over? It’s a never ending cycle. Meanwhile the school to prison pipeline gets longer and longer as kids have the mindset *I’m failing. What’s the point of life?* All kids see is people giving up on them and schools getting shut down 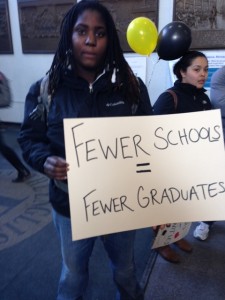 Kalise Osula, 12th grade, Boston Community Leadership Academy
The more schools BPS closes, the fewer students graduate because as students get shifted from high school to high school, students who are already having trouble end up dropping out. And as you close schools you end up over-populating other schools. I don’t believe that charter schools are better than public schools. They both offer different things for different students. Some students work better in public schools, some work better in charter schools. To speak to charter schools, why is it that companies like Walmart can go in and basically run a school? Since when does Walmart know anything about what it means to educate children?