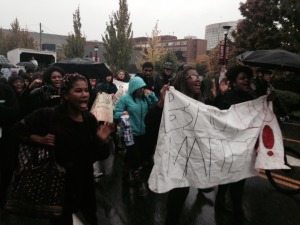 Members of the Black Student Union at Seattle’s Garfield High lead a walkout to protest police violence and racism.

EduShyster: You happened to be in Boston recently giving a talk about the new uprising against high-stakes testing on the same night that thousands of people here were protesting police violence and institutional racism. Here’s the people’s mic—explain how the two causes are related.

Jesse Hagopian: If I could have, I would have moved the talk to the protest to connect the issues. I would have said that the purpose of education is to empower young people to help solve problems in their community and their society. The purpose of standardized testing is to learn how to eliminate wrong answer choices rather than how to critically think or organize with people around you or collaborate on issues you care about. These tests are disempowering kids from the skills they really need to solve the big problems that our society and kids themselves are facing—like rampant police brutality and police terror. What’s the point of making our kids college and career ready if they can be shot down in the street and there’s no justice? You look at how testing and the preparation for testing now monopolizes class time—that is the American school system. If our schools emphasized rote memorization and dumbing down, that would be unfortunate. But the problem goes so far beyond that. We face huge problems as a society: mass incarceration, endless wars, income inequality. Our education system has to be about empowering students to solve those problems.

EduShyster: I can think of one key difference between the two movements. All of the people who are protesting testing are white suburban moms who are unhappy that their kids aren’t as brilliant as they thought.

Hagopian: That comment is offensive for lots of reasons but one of the biggest is that it dismisses the parents and teachers of color who are leaders of this movement.  Look at Castle Bridge Elementary in New York where more than 80% of the parents opted their kids out of the test. The PTA leaders who helped spearhead that movement are both parents of color. Look at Karen Lewis in Chicago, who has led a civil rights struggle for the schools Chicago’s students deserve, which includes a fight against high-stakes testing. In Seattle we organized a multi-racial coalition, and some of the most vocal opponents of the MAP (Measures of Academic Progress) test were Black teachers, myself included. We were able to partner with the NAACP and it was a really powerful coalition. At one point the NAACP held a press conference and said *Look: the MAP test is the tool that’s used to decide who is in AP classes which are overwhelmingly white. This is a tool of institutional racism and tracking and the MAP tests have long played that role. If this is the metric that we use to decide who is advanced and who isn’t, and only white children end up being identified as advanced, then something clearly isn’t working.* 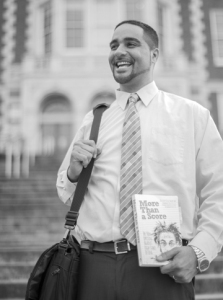 EduShyster: In your new book, More than a Score, you argue that the movement against high-stakes testing actually started with civil rights activists. Explain.

Hagopian: The first major test resisters were Black intellectuals. Horace Mann Bond has a beautiful passage where he describes how these tests are used to rank and sort our children and how, when you test the kids in the rich neighborhoods who have access to all of the resources and of course they do better. It has nothing to do with intelligence—it has to do with access to resources. What he wrote in the 1930’s is exactly what we see happening in our schools today. Or W.E.B. Dubois, founder of the NAACP, who spoke out against early standardized tests because they were grafted onto the public schools via the eugenics movement, the idea being that it was possible to prove white supremacy through *scientific* methods. He knew from the very beginning that these tests were designed to show Black failure, and they’re still showing that. The fact that there’s been such a stability of test scores—that rich white students score the best—shows that these are a tool for ranking and sorting. And increasingly these tests are being used to shut down schools in poor neighborhoods and which serve predominantly students of color.

EduShyster: Here’s where I have to channel one of my favorite critics. Let’s call him Math Teacher, because that’s the name he uses when we tangle on my blog. He teaches at a Boston charter school, and as he’ll be quick to ask, if those schools are failing to teach kids at the most basic level, should they be kept open? 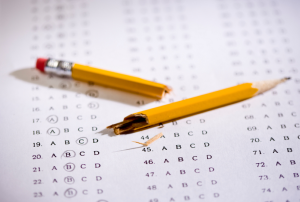 Hagopian: That’s a great question. As much as I vehemently defend our public schools against corporatization and what I call the testocracy, I think that we have to acknowledge that our schools have long played the role of ranking and sorting students into different strata of society, and students of color in particular have been sorted into the bottom. There’s a tension in public schools because on the one hand they play that ranking and sorting function, but on the other hand they hold radical democratic possibilities to empower people with the knowledge that they need to transform society. That’s why schools are contested spaces and why every civil rights movement in our history has been focused on the schools in some way. We need to transform our school system. The question is *who are the best people to do that?* And the best people to do that are teachers and parents—not billionaires or the one percent. The sorting process worked out just fine for them.

EduShyster: What if the billionaires suddenly decided to transform the public schools into the sorts of schools where they send their own kids?

Hagopian: I’ve often said that the MAP boycott didn’t start at Garfield High School, but Lakeside High School, where Bill Gates went and where his kids go. The private schools for the elites never administer the MAP tests and all of these other tests because for their children they want the performing arts, creativity, time to develop their children into leaders, libraries with tens of thousands of volumes, study abroad programs, Olympic swimming pools. But they want for our kids rote memorization and that’s getting *career and college ready.* We say *what’s good enough for your child is good enough for ours.*

EduShyster: Garfield High is associated with rabble-rousing teachers because of the successful MAP boycott, but students there are really active too. I follow you on Twitter, so I know that in addition to walking out to protest the Ferguson decision, students also walked out over budget cuts. Are all of these walkouts getting in the way of their test prep? 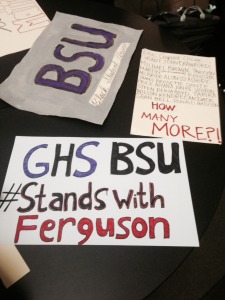 Hagopian: Garfield High is going through an incredible season of student activism. I’m the adviser to the Black Student Union at Garfield High School, whose members were recently recognized by the Seattle Human Rights Commission for being rising human rights leaders. After the Darren Wilson decision, they called a meeting in the cafeteria, held a speakout, then 1,000 students marched out of Garfield and to a rally at the NAACP. I happened to be driving down the road and had to pull over because all of a sudden here come 1,000 students chanting *hands up, don’t shoot.* The students will tell you that the problem isn’t just in Ferguson or on Staten Island, but with institutional racism. They look around and it’s there in the Seattle Public Schools with, for example, disproportionate suspension rates for minority students. They feel like it’s their responsibility to highlight these issues and to act on their own behalf. They’ve become the teachers. They’re teaching a whole city about the depths of racism in our society and what it means to stand up for what you believe in. That’s exactly what education should be about. These students didn’t just become activists overnight, by the way. The last few years, students protested against budget cuts at Garfield High, followed by the successful MAP boycott that galvanized our whole community, and really demonstrated to students and teachers the power of standing up. I think what I’m most proud of is that we’re actually showing what the alternative to rote memorization and standardized curriculum looks like.

Jesse Hagopian teaches history and advises the Black Student Union at Seattle’s Garfield High School. He is the editor of More than a Score: the New Uprising Against High-Stakes Testing.