When bad education policy and immigration politics collide, the result is uncertainty and anxiety for immigrant students… 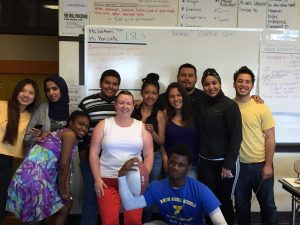 Kristen Leathers with some of her students at Boston’s Brighton High School.

By Kristen Leathers
A few weeks ago, I received a letter from the Boston Public Schools informing me that I’m being let go from Brighton High School where I’ve taught for the past 10 years. I wasn’t the only one. Brighton High and two other Boston schools were deemed turnaround schools last fall and every staff member in each of these schools, from the headmaster to the paraprofessionals, was excessed. When faced with questions about the future, I told my students that I am still committed to working at Brighton High and teaching them, but I can offer them no assurances as I have none for myself.

We recently did a project in my intermediate ESL class where students wrote a letter about how the turnaround process was affecting them and what they felt would be needed to fix Brighton High School. We’ve been talking a lot about current events and I felt that it was important for them to find and use their own voices. Many of them talked about how devastating it is to be losing their teachers. They described this place as a refuge and a second home; losing that makes them feel frightened, anxious and confused.

My students come from all over the world: Central and South America, Brazil, Cape Verde, Guinea Bissau and Vietnam. The turnaround process is just another layer of them not knowing what’s going to happen in their future. These days, when it seems as though immigrant status is being questioned, no matter how legal or solid your status seemed, providing these students with a safe, stable environment where they know they can rely on something is important, and that’s being taken away from them.

My students come from all over the world: Central and South America, Brazil, Cape Verde, Guinea Bissau and Vietnam. The turnaround process is just another layer of them not knowing what’s going to happen in their future. These days, when it seems as though immigrant status is being questioned, no matter how legal or solid your status seemed, providing these students with a safe, stable environment where they know they can rely on something is important, and that’s being taken away from them.

As schools in Boston have become more specialized and charters become more prevalent, we have watched our school population change dramatically. Brighton High School has among the highest populations of students on IEPs and English Language Learners in the state. We also have one of the highest population of homeless students in the city. Meanwhile we’ve had budget cuts year after year. Teachers at the school have gotten additional licenses to be sure we are equipped to educate our students best and extra professional development to compensate for the loss of mental health professionals and social workers.

Next year, Brighton High will welcome 80 new ESL 1 students with limited to no English proficiency. While research shows that it takes between five to seven years to gain fluency in a language, these students get a laughably short one year *grace period* to gain enough command and mastery to be able to perform proficiently on the MCAS English test. For math and science MCAS, newcomers aren’t even given that one year. They’re expected to demonstrate the proficiency that it takes their native born, English speaking peers 16 plus years to achieve. Their “failure” to do so is not in any way a failure; the way that they are measured is unfair and unjust. The fact that many of them do succeed is a testament to them and their teachers.

The number of times any person from the state visited our school before deeming us a failing school is exactly zero. Test scores are literally the only thing they see or care about. The system is broken. It is structured so that the most vulnerable students with the highest needs are funneled into schools with dwindling resources. Then, when these students struggle, the schools are taken over. The number of high schools that have ever come out of turnaround status in Massachusetts is one—one in six years. The state does not have a magic wand to fix these schools because they are not broken. The system that purports to serve them is. My students deserve a stable supportive school community and they deserve so much more than to be reduced to a test score.

Kristen Leathers teaches ESL 3 at Brighton High School. She is a National Board Certified Teacher and a Lead Teacher at BHS. Kristen also wrote a Model Curriculum Unit (MCU) for the Next Generation ESL Project and is a member of the ESE Teacher Advisory Cabinet. You can reach her at kristen.leathers@gmail.com or on Twitter.

And don’t miss the latest episode of Have You Heard on school turnarounds. Kristen Leathers and Excel High School teachers Rajeeve Martyn and Marcus Walker talk about why think turning their schools upside down is bad policy.