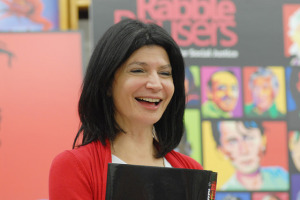 EduShyster: You recently met with President Obama. I’ll ask this first question on behalf of all of my readers: did you set him straight?

Eskelsen Garcia: I can tell you that I had an amazing opportunity to have a very short conversation with the President. I got to ride in the Presidential limo on the way to a labor rally in Milwaukee and I was able to tell him a little about the back-to-school tour I’ve been on and what I’m hearing from teachers. I told him that the constant testing is the number one issue and that teachers tell me again and again: *I’m so excited for school to start and I love my job. Now if I could just get these idiot tests out of the way so that I can actually teach.* I had a chance to express what I think are very honest, passionate and heartfelt responses of educators all over the country. I could see that the President’s wheels were turning.

EduShyster: You have such a remarkable personal story. You started your career as a cafeteria lunch lady and are now heading up the largest union in the country.

Lily Eskelsen Garcia: Let me qualify that. I wasn’t actually a lunch lady—I was a salad girl. I didn’t have the status to work with the hot foods. Folks want to know what brought me here. That’s how it all started—in the cafeteria. I used to joke with my kids that they’d better be careful because I’d be the one picking who got to play them in the made-for-TV-movie. But everyone has a story. Everyone has joys and tragedies and disappointments in their lives. I think what’s unusual about my story is that, by all stereotypes, I’m not supposed to be here. I come from Utah! 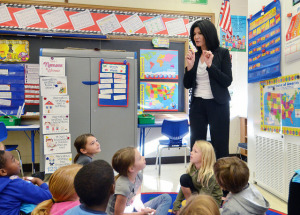 EduShyster: Your passion, along with the sharp way you’re talking about these issues, is winning you some serious admirers. My sister, a teacher in southern Illinois and an AFT member, keeps texting me: *you won’t believe what Lily just said :)*

Eskelsen Garcia: I try to be as clear as I need to be. That’s how I’ve always been, but when you have a title, all of a sudden people pay a different kind of attention to you. All I know is that I have a responsibility to express that this is really important, and express it in a way that people can understand. That’s something I learned how to do when I was teaching 6th graders. When you see a student bullying someone on the playground, you pull them aside and say *this is not going to happen in our school.* Without threatening, you have to convey that *she’s serious.*

EduShyster: I get the sense that your message about not being a fan of tying high-stakes consequences to standardized tests is sinking in. But I have to channel the skeptics here and ask about your vocal support of the Common Core. How can you—not just the NEA but you personally—be such a proponent of something that many teachers believe is basically a 50-state delivery system for high-stakes tests? You even have a Common Core app on your phone!

Eskelsen Garcia: Everyone should have a Common Core app on their phones. But listen, I have this exact conversation with my best friend all the time. She hate, hate, hates the Common Core and she always says: *You know exactly what’s going to happen, Lily. You know the Common Core is just going to be turned into one more high-stakes punishment. It will be all about cut scores, you get fired, this kid doesn’t graduate.* I can’t disagree with her on that. She’s basically describing what happened in New York. Before teachers were even trained to know what was in the Common Core at their grade level, before they had time to do anything in a thoughtful way, it was clearly so much more important to have the cut scores and the punishments in place. But here’s what I tell my friend. Let’s say you could develop the perfect standards. They’re so perfect that everyone is throwing up confetti because that’s how perfect they are. And you find the perfect curriculum and you have text books that are aligned to these perfect standards. And you only have to give one test a year instead of a thousand of them. In other words, it’s perfect! But some politician says, *you get punished, you get a prize.* It’s not the standards. It’s not the curriculum. It is the high-stakes punishment that is hooked to them. That’s why people are so upset about the standards, because of the high-stakes punishment that’s now attached to them and that has corrupted what it means to teach. We have to get rid of that. 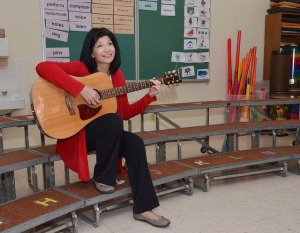 EduShyster: Well that sounds easy enough. How do we do it?

Eskelsen Garcia: So much of the resistance is bubbling up organically. I think the challenge for unions is to figure out how to organize the organic. Parents, principals’ associations, school boards—they’ve had it with excessive testing and the excessive consumption of time and resources. I’ve been down in Florida on our back-to-school tour and a school board in Lee County basically said *that’s it—we’re not going to do this testing anymore.* They had their hands slapped as a result, but their hearts were in the right place. You can bet that they were applauded by other school board groups all over the country.

EduShyster: How did you personally end up becoming a union rabble rouser?

Eskelsen Garcia: People tell these stories—*oh, my grandfather was a union member*—but that’s not our culture in Utah. We’re a right to work for less state. We’re a Republican state. We’re a passive aggressive state. But we’re also a state that is extremely passionate about children. I got active in my union just a few years after I started teaching. I had 39 fifth graders. The governor at the time had a plan to balance the state budget by dumping as many kids into classrooms as he could, and I thought: *who is going to help with this?* I loved the PTA and the moms, but they weren’t going to stare down the governor. My union would. My Utah Education Association would. They would have rallies at the statehouse and tell anyone who would listen that the underfunding of our schools was undercutting our ability to do our jobs. And I thought: *I want to be a part of that.* You know why? Because I hate whining, and I just can’t stand to be in the presence of whiners. We would sit around the faculty room at school and we’d complain about this or that. Whatever the problem was we were talking about, we immediately moved to *what should we do?* What are we going to do that makes this situation better? That’s what a union is. We don’t whine. We do.

EduShyster: I can’t help that think that the anti-tenure lawsuits that are now bubbling up across the country are aimed at keeping teachers from doing exactly what you just described.

But you know, as bad and stupid as things are right now, I actually feel really excited. Folks who never really thought about a union or whether they needed one are now looking around and asking *what in the world is going on? I’m a teacher and I want to do my job and people are throwing things at me. I need my colleagues.*

Eskelsen Garcia: You’re right. There’s so much talk about bad teachers, and every morning celebrities and billionaires wake up and say *I want to make the world a better place by firing more teachers.* My question, by the way, and one that they never address, is who they plan to replace all of these teachers with. That’s what people should be focused on. But you know, as bad and stupid as things are right now, I actually feel really excited. Folks who never really thought about a union or whether they needed one are now looking around and asking *what in the world is going on? I’m a teacher and I want to do my job and people are throwing things at me. I need my colleagues.* We have no billionaires, we have no real wealth, we have each other. We’re finding each other on Twitter and blogs, in meetings and at rallies. And we’re coming together, not just for ourselves and the integrity of our profession, but because we see what they’re trying to do to our students. None of us got into this profession because we wanted to get rich. We got into teaching because we have a real passion for kids. And when we see our kids in trouble, we’re going to step up and protect them and that means we have to come together. I think the opportunity has never been greater to show the relevance of power of coming together in a union.

EduShyster: My final question for you comes from one of your members. He wants to know what you can do to make the NEA less cold and corporate seeming, as he put it.

Eskelsen Garcia: I’ve been on this back-to-school tour that started in Alaska. Everywhere I go, I’m blown away by the response of members—not leaders, members—who say *keep saying it the way you’re saying it because you talk like we talk.*  And that’s my job—to represent that voice and to try to say it in a way that makes people sit up and pay attention. People have to hear our hearts.