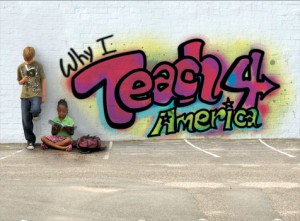 I dedicate this post to my Premium Club readers who simply aren’t excellent enough to Teach for America.

Let’s face it: you and I are never going to be Teach for America material. But while we may not have the goods to join Wendy Kopp’s Kidz we can still experience their freshness and innovation vicariously: by watching the Real Housewives of Miami host a benefit for TFA on Bravo. No doubt you are wondering how in the world EduShyster could know such a thing…Reader: I fear that mine has been a wasted life of debauchery and exceedingly low expectations.

But what if you want to associate yourself with the excellence of the TFA brand without besmirching thyself with the taint of reality television? Good news again: you can vote for one of an apparently ENDLESS supply of TFA candidates currently running for office. You see, once the two years are up and the TFA-er is officially a life-long educator, it’s time to take the next logical career step: talking about one’s accomplishments to the broadest possible audience.

I first became aware of said phenomenon thanks to rephorm phave and Jonah Edelman pal Jason Williams, who ran for Superintendent of Public Instruction in Arizona on the grounds that he was a—say it with me reader—”life long educator“ despite the fact that he didn’t even finish out his full two years in Teach for America. Alas, voters smelled a phraud and sent Mr. Williams packing—to Massachusetts where, at this very moment, he is Standing for Children.

My current phave candidate comes courtesy of an EduShyster premium reader in Minneapolis who has asked to remain anonymous lest she lose her teaching job and be forced to go to work at un escuelo chartero. Thanks to Señora Anónimo I am planning to move to Minnesota just so that I can cast a vote for young master Josh Reimnitz, candidate for Minneapolis School Board. Mr. Reimnitz is extremely passionate about closing the achievement gap, which is evidenced in this video in which he is seen high-fiving a minority student.

The school board race pits TFA alum Reimnitz against an actual life-long educator who is at a distinct disadvantage as she is not known to have ever high-fived a minority student. Reimnitz is running on the grounds that the achievement gap is the civil rights issue of our time. (Note: If you are playing the EduShyster drinking game at home, sip now). But here’s where our otherwise feel-good story takes a strange twist. While Reimnitz proudly points to his success in boosting test scores at an urban Atlanta school, said school was implicated in a cheating scandal in which Reimnitz’s own scores were targeted for an unusually high number of erasure marks changing answers from wrong to right. As a result of the cheating scandal the school was closed down and all scores, including Reimnitz’s were invalidated.

In his endorsement of Reimnitz, Minneapolis mayor praised him for being willing to take “the tough, aggressive action we need to make sure every single kid gets the quality education they deserve.” Señora Anónimo notes that in addition to the Mayor’s backing Reimnitz has also been endorsed by the Minneapolis Star-Tribune. “If elected into district four, his vote will swing the school board to pro reform, anti union, anti teacher, etc. Dismantling public education in Minneapolis Public Schools here we come!”

Got a rephorm story to share? Send it to tips@haveyouheardblog.com.