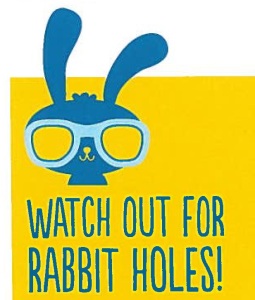 A handy guide to steering clear of weeds and rabbit holes…

Can we talk about testing? And by *talk* I mean the thing where parents offer up reasonable, legitimate and likely heartfelt concerns, which testing advocates then deflect by changing the subject and *pivoting to a higher emotion.* That’s right reader—it’s time for another edition of Say This, Not That.Today’s topic: testing. You’ll laugh, you’ll cry, you’ll gasp in amazement as our *testing talk* is transformed to appeal to different audiences. But watch out for weeds and rabbit holes!

A shout out, then a pivot
First a shout out to Anthony Cody for getting his hands on this outstanding document, which you can savor in its entirety here. And while the provenance of said document (not to mention its funding sources) is unclear, what is clear is that there have never been more opportunities to talk about testing. Say, for example, that you encounter someone (who is apparently everyone these days) who believes that there is too much testing. While you know for a fact that this is not true because you read this *report* (although not, apparently, its embarrassing *correction*), now is not the time to dwell upon what you know you know. That’s right, young testing advocate—it’s time to *pivot to a higher emotion.*

Warning: rabbit hole ahead
See how easy that was? All it took was a quick pivot and you totally worked your the-new-tests-are-better-than-the-old-tests magic, not to mention making the parent who had the misfortune of encountering you in the first place feel like a bit of an idiot. But wait—we’re not out of the weeds yet. Said parent now insists on offering up an *extreme example* of something that is actually happening to said parent’s actual child. *My child is tested every other week. That’s all they do is prepare for and take tests!* Which leaves you with no choice but to work your rhetorical magic once again. May I recommend that you trot out that time-tested trick of telling said parent that s/he’s wrong about testing? Here’s a tip: *Do use analogies when they can help normalize and simplify complicated ideas. But don’t overuse them at the expense of straight talk.*

Mind your own business, business person
Now where were we? Ah yes—our said parent has just taught you a thing or two about pivoting by pivoting. Now the parent, who is frankly becoming just a wee bit tiresome, is rabbiting on 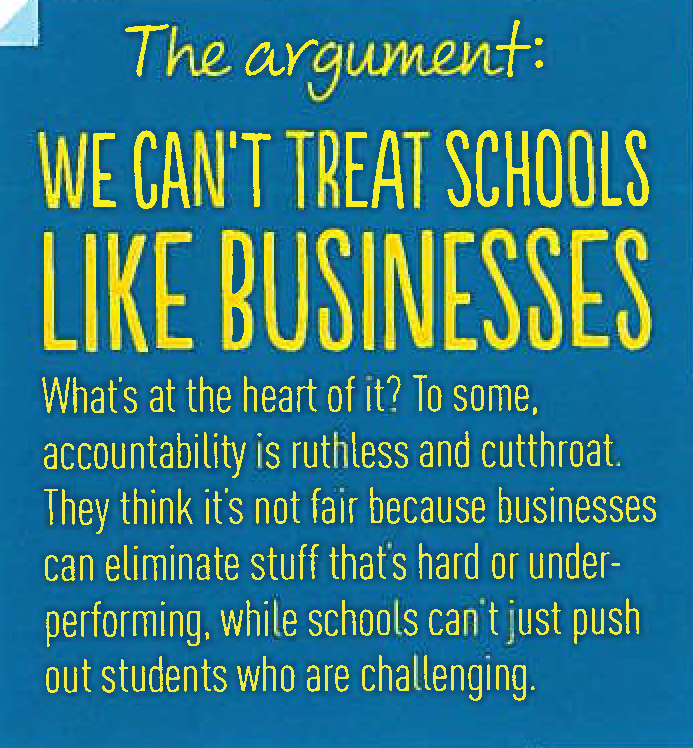 about how we can’t treat schools like businesses, how accountability is *ruthless and cut-throat,* and schools can’t just *push out students who are challenging.* (They can’t???) You could 1) announce that you have to pick up Sophie and Grayson from college readiness camp and head straight for the Escalade or 2) attempt the rarely attempted triple pivot, pivoting off of said parent’s pivot from your original pivot. That’s right: pivot once more to a higher emotion—what’s best for my kids. No, not YOUR kids (who are flourishing in a non-test-y environment). Said parent’s kids—the ones we were just talking about who are not actually taking that many tests. Audience shift: if said parents are edupreneurs, said pivot will be unnecessary as *most business people are comfortable with the idea of metrics and measurements* and will not look at you all weird and confused-like when you drop ROI in the context of kids and schools.

The facts are on your side
Do you know what parents love? Facts. And it’s a well-known true fact that low-income parents are twice as likely to appreciate a fact when it is shared with them by a person who is not themselves low-income. So this would be an ideal time for you to roll out some of said facts now. Like the one about the 2012 study that revealed that reading and math ability at age 7 was linked to social class a full 35 years later. Which is probably why said parent is over-counting the number of tests that their actual kids are taking in their actual class. But warning: just because you are *in the know* doesn’t mean that you are *in the clear.* In fact(s), I’m pretty sure that’s a rabbit hole ahead…

The facts are still on your side
Your course is obvi here, young testing advocate. Simply explain to said parent in the simplest language of which you are capable that their child’s school didn’t actually close, it was repurposed. And that the reason that there is so much teaching to the test is NOT because there are too many tests, which you totally already explained is not the case, but that said parent’s child has a bad teacher, which is probably why it was a good thing that said child’s school closed. I mean was repurposed. Did you mention that the new tests are better tests? And that the new better tests have been designed so that teaching to the test will be practically impossible? Audience shift: if the parent to whom you are STILL talking is an edupreneur, note that greater alignment between curriculum and tests means a major business opportunity. 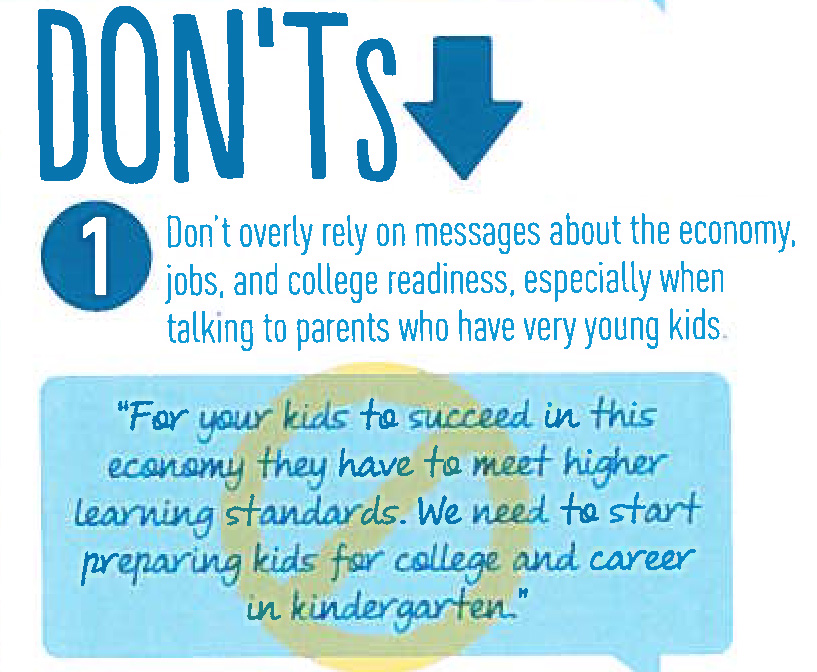 Do’s and don’ts
Do bring extra facts with you, young testing advocate, and also some kind of something that can be used to tie said parent to a chair as twice as many parents will choose to be on the receiving end of twice as many of your facts for twice as long if they are given no choice. Also, *don’t throw teachers under the bus* as this is a rabbit hole and also a hard habit to break as I’m pretty sure you were still just doing this as recently as today. Also, also, *don’t overly rely on messages about the economy, jobs, and college readiness,* as this is a *don’t* and also, also a hard habit to break. And do pivot once again to a higher emotion: what’s best for my kids. No, not YOUR kids…