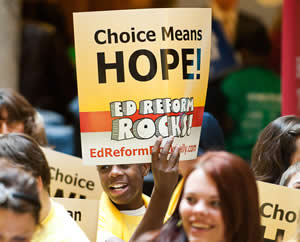 Walmart is leading the effort to give low-income Americans more ¢hoi¢e in education, while insuring that they remain low income.

It is a well known fact that students who attend our union-stifled public schools are ill prepared for their future careers—at Walmart. That is why Walmart is leading the effort to fix our failing schools by introducing some much needed competition into the public education monopoly. Much like shoppers at Walmart have a choice of many different Chinese-made goods, education consumers will soon have a veritable all-you-can-eat buffet of edu-choices. All this is thanks to the efforts of the Walton Family Foundation, which has plunked down a cool $1 billion worth of Walmart profits to transphorm public education.

In this cool new video, the Waltons lay out their ambitious vision for education rephorm:

But who is this mysterious Low-Income Stick Figure mom (LISFM) and from whence does her low income derive? Given that Walmart employs a full 1% of the nation’s workers, chances are that LISFM either works for Walmart or for a company that follows the Walmart example: low-wage work in a union-free setting with few benefits and little opportunity for advancement.

All this is to say that if the Waltons were really “driven by the urgent need to dramatically raise student achievement,” they might consider urging Walmart to give LISFM a raise instead of sending her from school to school in her one-dimensional car in search of ¢hoi¢e. It’s a modern-day miracle: increase the incomes of poor families and watch test scores rise. In fact, economists have determined that every $1000 increase in income raises combined math and reading test scores by 6%. Even in the throes of a tryptophan-induced haze, the conclusions of YEARS of research are impossible to deny: raising incomes is the only guaranteed way to boost student achievement.

Could Walmart really afford to pay its workers more, without cutting into the profits that are used to fund essential education rephorm work? In short: ¡si! Former Wall Street analyst Henry Blodget calculated that Walmart could give every one of its 1.1 million associates a $5000 raise and still be left with an operating profit of $18 billion per year. As for the six members of the Walton family, they have the same net worth as THE BOTTOM 41.5% of AMERICANS COMBINED.

But paying workers more is so 1950’s. The cool 21st century way to prepare low-income students for 21st century careers to is to fund education rephorm. Last year the Waltons spent $159 million on various education rephorm initiatives, which works out to $144.54 per Walmart associate. View the complete list here. Among the recipients of the Waltons’ largesse are a whole host of familiar names:

So many familiar names and faces, why it’s like a rephorm family reunion! Which makes ¢ents given that other than the Minneapolis Kramers the Waltons are indisputably the rephormiest family in America. Sam Walton’s daughter Alice, the second richest woman in the nation, recently kicked in $1.1 million of her own money to help get Washington State’s new charter initiative passed. Then there is Alice’s niece, Carrie Walton Penner, a foundation trustee, who sits on the boards of KIPP and the Alliance for School Choice. And don’t forget Carrie’s SO, Greg, who is on the national board of directors of Teach for America and the co-chair of the board of directors of the Charter Growth Fund.

So reader, when you rush to your local Walmart to enjoy Black Friday bargains, ignore the protests taking place at 1,000 different stores across the country and be sure to give a friendly shout out to Low Income Stick Figure Mom. Sure her life sucks: she’s not getting a raise, AND she had to work on Thanksgiving. But thanks to the efforts of the Walton family, she and her kids have a bright, rephormy future to look forward to.

Send comments or recipes for Thanksgiving leftovers to tips@haveyouheardblog.com.