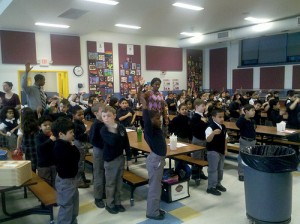 The military style, “no excuses” schools that education reformers are pushing on poor and minority kids are directly at odds with the civil rights language they use.

Perhaps the most outrageous contradiction in corporate education reform rhetoric is the vast gap between the civil rights language used by reformers and the programs they’re actually pushing: low-rent charters for minority kids, complete with a “no excuses,” pull-up-your-pants curriculum that would never fly in a white suburban school.

A reminder of the full extent of the reformers’ hypocrisy arrived in the EduShyster tip box just this week. A recent participant in a program called the Rhode Island Teaching Fellows, part of the Michelle Rhee-founded New Teacher Project (TNTP), wrote to describe her experience in their 5 week teacher training session. Moved by the catch phrase “Let’s close the achievement gap,” the writer’s initial excitement about teaching in one of Rhode Island’s high needs urban schools soon turned to shock at the content of what she and her fellow fellows were actually being taught. I encouraged her to send her story to Diane Ravitch and you can read it here.

The writer describes the “curriculum” of the program as behavioral control–both for the fellows themselves and for the minority students they were being “trained to teach.”

We start week one learning militant-type tactics of behavioral control such as “do it again,” “do it now,” and SLANT to name just a few. We practice this over and over again in a highly structured environment where our every move is scheduled and monitored. We are told where to sit, when to stand and when to speak…We are actually scheduled to meet with our coaches for “debriefing” where we are told not to talk and can only answer with “yes” or “no.” We watch videos of children in which these tactics are employed in other states. Students are drilled on how to line up, hands by side, mouths closed, told which way to turn and what muscle to move next. They are instructed like they are in the military or prison. All the kids in the video are, of course, black. These behavioral control tactics are, of course, not utilized in white schools.

The writer dropped out of the program a few days later. Now she’s determined to expose Teaching Fellows as a fraud that does real damage by sending untrained teachers to work with low-income black and brown students in the urban schools, and uses public education grants to do it. The writer’s conclusion: “I have decided to continue on and become an effective teacher the proper way in two years and not destroy the lives of unsuspecting students on my way.” Bravo!

Teaching Fellows, by the way, is not some obscure entity. Last year, its 18 training programs attracted 33,000 applicants. And just this week, The New Teacher Project was out with another headlines-grabbing “study“ proving that the very best teachers in our public schools often have the least training or experience. (Policy nerds will enjoy the Shanker Blog’s excellent analysis of the data on which the study is based.)

Meanwhile, the “no excuses” model in which the Teaching Fellows are trained increasingly dominates the low-rent, urban charters that self-styled education reformers advocate for poor and minority students. Massachusetts even has a new graduate school for aspiring teachers that specializes in military-style classroom management techniques. Excerpts from the Match training manual for aspiring teachers recently appeared in the Washington Post.

Teachers are instructed to “pounce like a cat” on any student misbehavior or act of non-compliance. Something called PEBO, or Patrolling Effort and Behavior Oblongata, is more important, according to the booklet, than good lessons or relationships with students and families in controlling “the rate of Misbehavior Tax that your students and you must pay for each class” (p17).

What in the hell does that mean??? As EduShyster has often pointed out, many of the leaders of the corporate #edreform movement attended elite private schools before going onto top-flight universities. Somehow I doubt that little Blakeslee and her friend Paige were ever ‘pounced on like cats’ for forgetting to put away the field hockey equipment. As for the rate of their “misbehavior tax,” daddy has accountants to handle that.