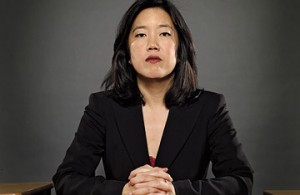 Does heroism hold value in Michelle Rhee’s measure of a teacher’s worth?

In the annals of tin-eared condolence statements, the one released by Michelle Rhee in the wake of the Newtown school shooting stands out. Her very word choices felt stilted and wrong, evoking a strange world in which children are “assets,” stunned and reeling teachers are “colleagues,” and family are the members of Rhee’s own “team.” But if the statement began on an off note, worse was still to come. The lesson of the hours-old tragedy, Rhee seemed to conclude, was that she’d been right along. “Improve schools for children,” (read, eliminate tenure and other workplace protections for teachers) and thereby “improve entire communities” (read, prevent senseless slaughter). As for her parting, there was nothing left for Rhee to do but double down, announcing that she and the entire StudentsFirst organization—”including the members of our team in Connecticut“—were recommitting to their mission today. Not two days from now, when the first of the unending series of memorials would begin, not a week from now when the funerals would at last be over, but today.

Save for a skirmish over whether the tragedy proves that we need more or fewer guns in our schools, Rhee has had nothing further to say on the subject of Newtown. Nor will she, I predict. What happened at Sandy Hook Elementary School presents Rhee with a difficult challenge. The heroism displayed by the teachers and staff who died in order to protect their young students, and the collective utterance by teachers everywhere that they would have done exactly the same reveals something hard and cold at the very center of Rhee’s reform project. There is an intense emotional bond in teaching, a love, that cannot be reduced to a mere statistical measurement.

It matters too that the Sandy Hook educators were union members, and that some of them had been working in the profession for a very, very long time. This is not to somehow imply that nonunion teachers, or less experienced teachers, or teachers in charter schools would not have responded as heroically. Who these teachers were is important because in recent years Michelle Rhee has done more than any single individual to create a narrative in which, not just union membership, but experience itself diminishes teachers and makes them suspect.

That’s because in Rhee’s world there is but a single, meaningful measure of a teacher’s worth: the statistical lift he or she gives to a student’s score on a standardized test in the course of a single year. Anything else is meaningless, and in the case of experience, worse— a bureaucratic barrier to replacing teachers who have, as Rhee would put it,  “jobs for life” with fresh, new teachers who measure up to Rhee’s single measure. Nor does Rhee’s rubric allow for the calculation of non-test value, like that added by the educators at Sandy Hook who gave everything to try to protect their young students, or would have.

The day after the shooting, the New York Times ran a story about the principal of Sandy Hook Elementary, Dawn Hochsprung, remarking on how seriously she took education policy issues. The Times implied that Hochsprung’s interest in such issues, not to mention the fact that she had a Twitter account, was unusual. But there are tens of thousands of educators just like Hochsprung; my sister is one. During my last visit to the rural Illinois town where my sister teaches, she asked me to show her how to use Twitter so that she, like Dawn, could follow Diane Ravitch in order to share information with the other teachers at her small school. “We have to get educated so that we can understand what’s happening to public education in this country,” is how my sister put it.

That the ranks of teachers-turned-policy-critics are swelling so quickly is due in no small part to Michelle Rhee herself. From California to Connecticut teachers feel utterly besieged by the likes of Rhee and the education reform movement of which she is the nominal head. The interchangeable organizations, bankrolled by deep-pocketed backers, proclaim themselves to be for students, children, excellence and achievement. Connecticut, already home to no fewer than five of these groups, including Rhee’s own StudentsFirst, welcomed yet another just this week: Educators4Excellence.

Michelle Rhee isn’t going anywhere. There is too much money behind her and her movement now, and too much money still to be made. But next to the heroism of the Newtown teachers, Rhee and her ilk seem smaller, diminished. By week’s end Rhee had been forced to release another statement, this one about StudentsFirst’s position on handguns in Michigan schools. Rhee had tried to remain neutral on the issue, but the vast majority of legislators endorsed by StudentsFirst in November voted in favor of allowing concealed weapons into schools. The legislators Rhee backed were also overwhelmingly in favor of Michigan’s new right to work law intended to weaken the power of the state’s unionized workers, including teachers.

Not all workers will be affected, by the way. The new law contains a hero provision that exempts police and firefighters.