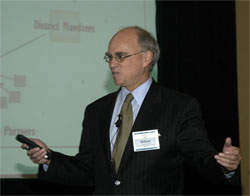 What do you call an organization that rakes in millions of tax payer dollars to turn around schools but never seems to produce any actual results? Elementary Watson! I believe that you call that organization an EduShyster. Meet this month’s nominee: Mass Insight–or Ma$$ In$ight–as they might more accurately be called.

Mass Insight Education, the sister organization of Mass Insight Global Partnerships–which does not sound ominous at all–has been cleaning up in the education reform “space” since 1997. Just how much money has the group raked in? According to the last Form 990 filed by the group in 2009, CEO William Guenther reported earning a cool $370,000–for 30 hours per week work. That works out to roughly $237 per hour. And that was three years ago…

Damn! Mass. Insight must be some serious school turn-er-arounders, wouldn’t you say? And more importantly, how can we get in on some of this turnaround action?

The good news is that Mass Insight doesn’t seem to expect the spigot to turn off any time soon. The organization, and its specialty division, the School Turnaround Group, currently have LOTS of job openings, including my personal favorite: the Vice President of Development and External Affairs. This lucky slob will be responsible for taking Mass. Insight from a $10 million organization to a $20 million education reform group.

That’s some serious cheddar. Where’s all that money going to come from? Well, like many “high performing” organizations in the #edreform world, Mass Insight is no longer content to merely boost student achievement in a “small number of reform-minded districts.” The group has now moved into the highly lucrative consulting world, offering helpful tips to public districts and state officials around the country about how to “modify collective bargaining agreements.”

There has never been a time with more targeted funding or political cover for states and districts to challenge the status quo and do what’s best for student achievement.

Obviously these guys know what they’re talking about, right? Well, that’s where our story gets a little murky. You see, if there is any evidence that Mass. Insight has successfully turned around a school or a district using its vaunted Tools for Turnaround, I can’t find any. An EduShyster reader alerted me to the fact that the successful turnaround case studies that appear on the Mass Insight website don’t seem to include any schools that Guenther et al were actually involved in.

But perhaps we’re looking at the wrong “metric,” as those of us in accountability circles like to say. Where Mass Insight and the School Turnaround Group really excel is in the ‘self promotion space.’ And that seems to count for a great deal these days–say $237 an hour.