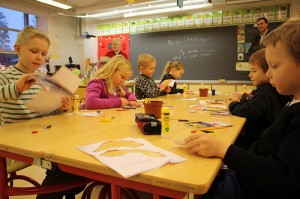 Finnish students prepare to take a high-stakes Findardized test. According to Finnish educational custom, their teacher will be exiled to Greenland should the students score poorly on the exam.

We have a lot to learn from Finland’s stunning educational success story—such as how they narrowed a once significant achievement gap (saavutus kuilu in Finnish) to the size of a small crevasse without using a single patented #edreform strategy. I mean, come on Finns! Everyone who is anyone knows that the only way to improve public schools is to close them, hand them over to private operators and fire LOTS of teachers.

And don’t even think about taking on an issue as complex and weighty as addressing education inequities without the heft of a corporate-funded education reform movement behind you. What’s that Finland??? There’s no such thing as Teach for Finland? OK, but you have StudentsFinst right? FinCan? The Finnish Federation of Students? Stand for Finnish Children?  What about Demokraatit  För Koulutuksen Uudistusta or FFER?  Well you MUST have a totally grassroots movement which has emerged spontaneously on college campuses across Finland devoted to eliminating tenure for teachers, or hallintaoikeus as the kids call it. What’s that Finland? You don’t have any of these??? Permit me to make use of Google translator to communicate the following to you: Tässä ei ole mitään vitun järkeä!

Now just because we happen to know that the Fins have absolutely nothing to teach us doesn’t mean that we shouldn’t go there to see for ourselves what isn’t important. My favorite recent example of this new breed of edu traveler comes from a Dr. Rick Hess of the American Enterprise Institute, widely regarded in corporate reform circles as a deep thinker. Dr. Hess had the opportunity to visit Finland last month to assess their secret ‘edu-sauce’ for himself and came away less than impressed. Among Hess’ “insights” (which I suspected arrived courtesy of a great deal of Koskenkorva) are these:

Beer, wine, and booze are so ridiculously expensive that teens can’t even afford to drink. (Hell, adult Finns hop on ferries to Stockholm and Tallinn just to stock up, because the taxes on alcohol are so punishing.)

The country averages about eight hours of sunlight a day from September to March, leaving a whole lot of time for studying and related indoor pursuits.

Finland has a sauna for every two or three citizens. I’m not exactly sure what to make of that, but it suggests that there are some pretty profound differences between Finland and the U.S., other than how we train teachers.

In fact, Dr. Hess came away from his trip “reminded why I have so little faith in the whole breathless industry of international comparisons.” What???? I wish you would have told me that before I ordered “U.S. Education Reform and National Security” by Joel Klein and Condoleeza Rice about how the demise of our once great nation is imminent—unless policy leaders move quickly to open more charter schools and fire LOTS of teachers.

Closer to home, members of the Massachusetts Business Alliance for Education recently toured Finland  in search of tips and lessons to ignore once they returned home. MBAE chief Linda Noonan, who has spent the last two years waging tireless campaigns to slash the health benefits received by the state’s teachers, and tie their evaluations to student test scores, was struck by two mysterious ingredients in Finnish edu-sauce:

Respect – Schools and teachers are highly respected and respect each other. In fact, teaching is a top choice as a profession – in part, [our guide] explained, because it is one where people can enjoy a good quality of life.

Good pay – Although salaries are not terribly high (he said they don’t compare with law or medicine), they are considered good ones. According to [our guide], a principal earns as much as “a member of Parliament” but doesn’t get the same perks or benefits as a legislator.

Like I said, we have absolutely nothing to learn from the Finns…