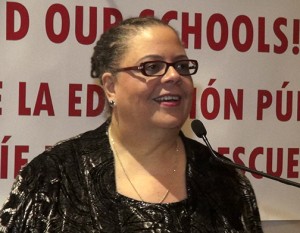 EduShyster: Chicago, like many cities, is seeing big protests over police brutality. I’m wondering if you see any connection between these protests and the discontent over school closures in the city’s poor neighborhoods that continues to simmer today.

Karen Lewis: We don’t really like to talk about race and class, but they underpin both of these issues. I’m 61 years old, which means I went through the original Civil Rights Movement—it’s not just history to me. But I also know from history that the extra-judicial killing of Black men is nothing new in our society. The difference is that we have social media, we have recordings, and so you have a movement of people demanding accountability. What’s been really interesting to me is that you see the same concepts emerging whether we’re talking about policing or education: compliance, obedience and a loss of dignity. I’m going to tell you what to do and if you don’t do it, I’ll just take your life. The same with schools: if you don’t do what I tell you to do, I’ll just take your school. To me, this is a very interesting co-mingling of what justice really looks like and it’s very different for different people.

EduShyster: I just finished reading Dana Goldstein’s terrific book The Teacher Wars, and one of the things that really stands out is the extent to which today’s education reform movement starts from the point of view that there’s nothing we can do about poverty per se. What do you say to that?

Lewis: You have to reframe the question to ask *why not?* Some of these people act as though poverty and wealth inequality just occur naturally, and that we just need to sit back and wait for the invisible hand to work its magic. Well, you look around Chicago and you see that hand isn’t invisible, in fact it’s perfectly visible, and it’s slapping people left and right. This, by the way, is why I think the fight for $15 an hour for low-wage workers is so important, and why I believe that teachers have to get involved in organizations that work for social and economic justice. Even Mayor Emanuel has capitulated on the wage issue. Funny how a re-election campaign can do that. 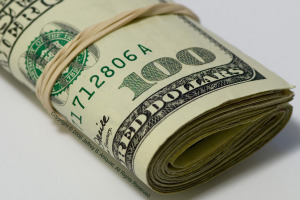 EduShyster: The Chicagoland version of the invisible hand always seems to end up in the cash register. For example, the Chicago Tribune recently ran a devastating investigative series on how risky bond deals are costing the Chicago Public Schools a fortune, even as these deals enrich Mayor Emanuel’s allies.

Lewis: And now they’re getting ready to do the same thing again with the pre-K program. People need to understand who the players are here. Because we don’t have the ability to elect a school board, the president of our school board is a bankster. He is unrepentant about these toxic swap deals that were made, and argues that, well, they were good deals at the time. Well these deals may be great when the stock market is up, but because of the crash in 2008 we owe tons of money to banks, tons of money to pensions. And so now you have the same people who got us into this saying *you have to give up your pensions so we can balance the budget.* No one says that maybe the banks shouldn’t get paid. The problem is that as long as the mayor controls the school board, there is nothing we can do.

Some of these people act as though poverty and wealth inequality just occur naturally, and that we just need to sit back and wait for the invisible hand to work its magic. Well, you look around Chicago and you see that hand isn’t invisible, in fact it’s perfectly visible, and it’s slapping people left and right.

EduShyster: Speaking of Rahm Emanuel, the mayoral election is in February and it’s really heating up. You told the Sun Times recently that you plan to be *out front* as a supporter of Jesus *Chuy* Garcia. What’s your role going to be? 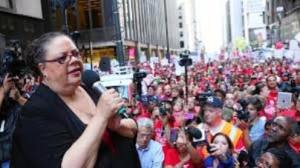 Lewis: I’m going to be fully engaged in working for Chuy. When I had my exploratory committee and was planning on running, Chuy was on that committee and gave me lots of really wonderful advice. Now it’s my turn to help him. I’m going to do what I can to help him fundraise, to introduce him to people in other communities, to try to help him build a coalition of working-class people that can push back against privatization, inequality and neo-liberalism—everything the current administration stands for. If people really believe that their vote matters and that they can change things, then Rahm Emanuel’s $20 million war chest won’t matter.

EduShyster: I see journalists and pundits make the claim again and again that you were elected to run the Chicago Teachers Union because you represented a more *confrontational* approach. They completely miss the point that you just made about trying to build a broad coalition of people to change the direction of the city and its schools.

Lewis: I was elected because I started talking about things that no one ever talks about. Typically during teacher union campaign season, what you hear is *I can get you a better raise than the last person.* I’ve been in the system for 25 years—26 now actually—and that’s the way it’s always been. What I kept saying was that *we need to build alliances with our natural allies, who are the parents.* Once we start building alliances with parents, then we stop blaming each other. Right now the system has us blaming them for not doing their jobs and not preparing their kids for school, and has them blaming us for being lazy or not doing what we need to do. Building alliances makes a difference because you’re stronger, because people can’t just pick you off. I’ve always talked about trying to recreate the strength of the union by sharing it with other folks who lack power. Now there are people who still don’t believe in that vision. They’re convinced that if we just enforced the contract, all of our woes would end. Well, that’s crazy. It’s not just enforcing the contract, it’s about building a political force. That’s how we change the laws that govern what happens in our classrooms.

Building alliances makes a difference because you’re stronger, because people can’t just pick you off. I’ve always talked about trying to recreate the strength of the union by sharing it with other folks who lack power.

EduShyster: You’re known for your, ahem, gently persuasive way of convincing people to get involved in politics, including running for office. What’s your secret sauce? 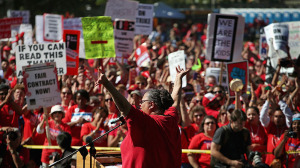 Lewis:  I just keep saying *you need to step up* until finally they get so tired of hearing me say it that they do. Several of our members are now running for city council, which I’m so happy about. That was one of the reasons why I was considering running for mayor. I told all these other people they needed to step up, so I needed to step up. Everywhere I went people kept saying: *Run for mayor! Run for mayor!* And I was like *what? I don’t want to run for mayor.* My husband said no, and I finally sat down and talked to him and said: *baby, I think I want to do this.* And he said if you want to do it, go ahead, because I don’t ever want you thinking that I stopped you from doing what you thought you really needed to do. Once I had that conversation with him that’s when I decided to run. And if I hadn’t had an aggressive, malignant brain tumor that’s what I would be doing. Unfortunately my body had different plans.

EduShyster: I wish I could share the audio of this interview, because I think your supporters, and all of the people who were so concerned after news of your illness broke, would feel really relieved if they could hear how good you sound. In fact, you sound just like Karen Lewis!

Lewis:  When people see me or talk to me they feel so much better. I’m incredibly fortunate in that my tumor was caught fairly early and it was close to the surface, so I have no physical impediments other than being very tired. The radiation and chemo really takes it out of you.

EduShyster: Now I have to ask you about something I read recently. Is it true that you once aspired to be a stand-up comic?

Lewis:  What do you mean *aspired to be?* I was working! This was the period after I flunked out of medical school but before I went to teach. I was working on comedy and doing open mics. I specialized in observational comedy, you know, checking out the irony in the world, fully filled with sarcasm—just like how I am for real.

EduShyster: In other words we really are sisters separated at birth.

Send comments to tips@haveyouheardblog.com. Like my work? Why not support my end-of-the year fund drive?