The exquisite sensitivity of being a billionaire… 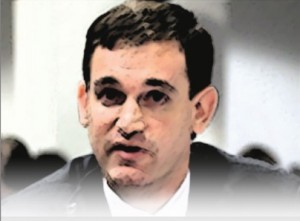 Reader: last time we checked in with the rich they were different from you and me. For one thing, the rich are exquisitely sensitive, which is why the average billionaire sleeps on sheets with a thread count higher than your annual income. But the truly rich also have billions more feelings than a slob like you, which means that their feelings are easily ruffled. Fortunately they also have armies of lawyers at the ready to intervene in the event of such misfortune. And so it is with EduShyster’s favorite young billionaire John Arnold, who recently endured a feelings hurting of unendurable magnitude. Ready the Kleenex reader for this is is a tragic tale indeed…

Big fact check
Lest you’re only now tuning into the saddest show in the world, allow me to bring you up to speed. On October 10 Diane Ravitch posted an item on her blog alleging that billionaire John Arnold’s incredibly generous gift to keep Head Start open during the government shut down might have been made with an ulterior motive. Was it possible, Ravitch wondered, that Arnold was using a good-will gesture to detract from a flurry of negative publicity around his efforts to slash public employee pensions, which have been chronicled here, here, here, here, here and here? Now obviously the answer to this obvious question is “no”—it has been well-documented throughout history that behind every beneficent gesture by a billionaire is a thoroughly beneficent motivation.

Money talks and lawyers call
But Ravitch’s post did contain some factual errors, which she corrected this week in an apology she issued to Mr. Arnold after she was contacted by one of his lawyers. Mr. Arnold only left Enron with $8 million, not the $3 billion cited by Ravitch. And the estimated $3 billion that he was worth when he retired at the age of 38 came not from Enron but from his work as a natural gas derivatives trader. Speaking of Enron, why did Ravitch have to bring that old canard up anyway??? Anyone who is everyone knows that while Enron’s implosion may have wiped out billions in pension assets, Arnold’s $8 million came from the non-tax-payer-fleecing division of Enron that has been so shamefully ignored in history’s cruel annals.

That’s not natural gas you smell—it’s reform
Mr. Arnold accepted Ravitch’s apology like the beneficent gentleman we already suspected him to be, chronicling the many, many examples of feelings hurting which he has been forced to endure in this blog post on his foundation website. Here is an excerpt but I warn you to brace yourself, reader, and perhaps bring out your wine box early as what you are about to read is unpleasant in the extreme.

In the past months alone, I have been referred to as everything from a “young right-wing kingmaker with clear designs on becoming the next generation’s Koch brothers” (despite my very vocal support of President Obama and my numerous contributions to left-of-center causes) to a “lipless, eager little jerk.”  Some have accused our pension reform efforts as a “craven plot to abuse workers,” ignoring the fact that the most important beneficiaries of our pension work will be those very workers.

Now obviously as you can plainly see from the picture I have helpfully included above, Mr. Arnold clearly has lips so I’m not sure what that is about. At least we can agree on one thing, or at least Mr. Arnold agrees on one thing: what Diane Ravitch wrote was “intentionally defamatory and contained outright lies about [Arnold’s] background.” And also, “Professor Ravitch’s blog post crossed the line between acceptable public debate and malicious, defamatory — and therefore impermissible — personal attacks.” Also “Ravitch’s apology was equally careless with the facts, self-serving, and laden with animosity and ambiguity.” And finally, *It would be pollyannaish [sic] to expect that her tactics will ever change.”

Can someone please make this billionaire whole?
But how to remedy such outrageousness??? I took it upon myself to contact Diane Ravitch and urge her to make a true gesture of goodwill to Mr. Arnold by agreeing to open up her Brooklyn neighborhood to natural gas fracking then donate the royalties to some cause that we all agree on, like, say Teach for America. But Mr. Arnold had an even better idea.

Why not donate $100,000 to Factcheck.org in an effort to prevent future instances of the sort of suffering that he himself has endured? I think it’s a great idea—in fact hows about we do some quick fact checking right now? Remember way back at the start of this post when Mr. Arnold engaged in a selfless act of good will and beneficence by giving $10 million to keep Head Start open during the government shut down? That selfless act generated an astonishing amount of warm and fuzzy publicity for the young billionaire and pension reform crusader but nearly all of the news outlets got one key fact wrong. That $10 million wasn’t a gift at all but an interest free loan…

How will you make up to John Arnold for the hurtful things you’ve said and thought about him? Send comments to tips@haveyouheardblog.com.