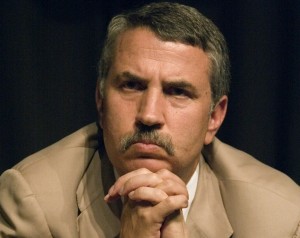 New York Times columnist Thomas Friedman looks glum after learning that claims he made about Race to the Top have been widely and repeatedly debunked.

New York Times columnist Thomas Friedman knows that in these days of economic uncertainty there is only one sure fire way to ensure prosperity: marry a friggin bazillionaire attend college and hope to be able to land a job that pays enough to cover your mountain of student debt.

If you somehow missed Mr. Friedman’s love letter to Race to the Top and Arne Duncan, allow me to summarize it for you. You see dear reader, “the high-wage, medium skilled job is over.” (This statement comes to us courtesy of a Gates Foundation “senior education expert” who is no doubt both high waged and high skilled).

It is too early to draw any firm conclusions, but [Arne] Duncan points to some early positives…Roughly 25 percent of the turnaround schools, Duncan said, have already showed double-digit increases in reading or math in their first year and about two-thirds showed gains.

No doubt, dear reader, you are raising a large glass to honor Secretary Duncan’s terrific accomplishment. (May I recommend a high altitude wine from Argentina in honor of the acme of success?) Alas you must put the glass down already. It turns out that Secretary Duncan’s claims have been repeatedly and publicly debunked, including just weeks ago by researchers at the National Education Policy Center who released a damning statement entitled—and I am not making this up—”The Research on Turnarounds Doesn’t Show What Arne Duncan Thinks It Shows”:

The Secretary referred to two-thirds of schools of schools in the first year of their turnaround efforts “showing real progress.” He claimed that 20-25% of those schools showed “double-digit gains in reading and math” in the first year. We searched high and low for the source of these numbers, but to no avail. We found no evidence from any research to support this claim. And we’re not alone.

In fact, when we asked the U.S. Department of Education press office about these claims, we were told, “The stats on academic progress no doubt came from the National Assessment of Educational Progress” (NAEP). But there is no doubt that the Department must be confused. NAEP is a periodic, nationally representative subject matter test based on samples of students, not entire student populations. Its results are reported by state and by large urban district. They are never reported for individual schools or students. It is impossible to use NAEP scores to track all or even most SIG schools. Keep in mind that Secretary Duncan has made these claims before and has had them publicly challenged, but his press office seems to be at a complete loss when asked to provide support. Read the full statement here.

Now I’m seriously getting worried for BOTH Secretary Duncan and columnist Thomas Friedman. If Friedman’s prediction is true, that every good high wage job will soon require more skill, does that mean that jobs like secretary of education and New York Times columnist will soon require skills like “accuracy,” “veracity” and “an ability to interpret data”? Could Duncan and Friedman’s value-added scores be affected by their botched performances? Will they be replaced by candidates who are fresher and more innovative? And if Friedman gets paid by the word, does “game-changer” count as one word or two?

What careers should Arne Duncan and Thomas Friedman retrain for? Send your comments to tips@haveyouheardblog.com.