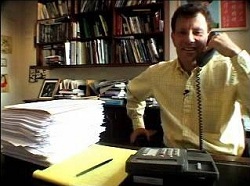 Columnist Nicholas Kristof on the phone with a representative of EdReform, Inc.

Much of the the reporting on the Chicago teachers strike has been of a surprisingly non-idiotic quality—especially by journalists who took the unusual step of going to Chicago and interviewing people who teach, send their children to public schools or attend such schools themselves.

But what to do if one is a prominent national columnist who is unable to leave one’s desk due to the extremely large number of followers to whom he must tweet throughout the day? Such was the fate of one Nicholas Kristof, who, apparently unable to make time even to Google “Chicago education reform, history of,” (try this experiment yourself at home, bold reader) managed to produce a column at once staggeringly misinformed, condescending and inane.

To be fair, Kristof wasn’t alone. All of the strike-related columns that appeared on the NYT editorial pages seemed to have been phoned in from EdReform, Inc. Joe Nocera kicked things off by casting Chicago Public Schools Jean Claude Brizard (who seems to have gone into hiding) in the heroic reformer mode of Joel Klein, last seen hustling edu-products for Rupert Murdoch. Kristof himself lamented that Chicago’s teachers use poverty as an excuse to avoid having to work very hard, and cited a “gold standard” study proving once and for all that students with bad teachers are three times more likely to be sold into sex slavery. (Actually that was a different Kristof column). David Brooks finished things off with a portrait of Rahm Emanual as the little known Greek God, Reformus, bravely raging against the city’s army of lazy, overpaid and unaccountable teachers.

But seriously, whatever one may think of these columnists they are certainly not stupid, especially Mr. Brooks, who wrote the title of his column in French, which is not even on the standardized test that columnists must take in order to be hired by the Times. So why do they produce such drivel on the subject of public education? Allow EduShyster to offer a few insightful observations.

We are all education reformers now
Remember the old days when rich people got together and sipped sauvignon blanc, ate smoked oysters off of tooth picks and compared no load mutual funds? That was before the entire 1% came down with a wildly infectious case of something we might call achievement gap fever. Prominent Democrats (especially hedge fund managers and columnists) appear particularly susceptible. Why, darling, even Hyatt heiress Penny Pritzker is an education reformer.

Paul Tough is a GENIUS
As much as liberal elites may mock the right for being the victims of epistemic closure, the #edreform world increasingly functions as an echo chamber. Case in point: the current liberal fixation on firing teachers as the cure-all to ending poverty. Seriously? That’s all we have to do? The problem with a circle jerk of ideas is that it tends to lead only in one direction: hysterical madness! Hence Kristof’s implication (ala “Waiting for Superman”) that bad teachers actually cause poverty.

They don’t know anyone who actually teaches (and no, having a niece in Teach for America doesn’t count)
Brilliant ideas like using so-called value-added models to measure teacher effectiveness tend to get even more brilliant the more drinks one has, or the further one’s proximity from an actual public school. In fact, the utter nonsensicality of Chicago’s proposal on teacher evaluation requires vast flagons of alcohol in order to make any sense at all.

They don’t know any poor people
In education reform land, poor kids–especially the poor minority kids whose adorable faces appear on every #edreform website–are only one great teacher away from becoming the next Barack Obama. How great would it be if only we could get rid of all of the bad teachers by using sophisticated VAM technology (see above), coupled with the removal of those pesky workplace protections. There would be Barack Obamas EVERYWHERE. In other words, a Democrats for Education Reform wet dream–well, maybe without all of that mean talk about Wall Street…

The newspaper they work for is looking to sell stuff to public schools
The future of newspapers–and all US media for that matter–depends not upon high-interest loans from Carlos Slim but unloading edu-products into the public schools. And therein lies the problem. As long as teachers are overpaid and overprotected, as we learned from Kristof, Brooks, et al, there won’t be enough left over dough to spring for all of that eduproduct. Now that’s an equation that even a New York Times columnist can understand.