Why are Chicago parents on a hunger strike to save a neighborhood school? Because after five years of fighting, they’ve run out of options... 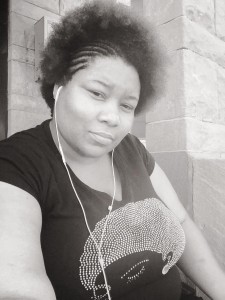 What’s happening in Bronzeville isn’t just about Dyett High School. There’s an agenda to push out black and brown low income and working families in the city of Chicago. If you look at the big picture, that’s what this is about. You don’t only have police brutality. You don’t have only have a decrease in public housing in the city and the closing of public schools. The neighborhood school is the last stable institution that we have. When you have good neighborhood schools, they service the neighborhood. They keep kids off the street; they help parents when they’re struggling and having issues in the home. That neighborhood school is a support system for the community, and the powers that be know that.

This isn’t the life I chose. It chose me.
I’m a forty year-old mother of five, soon to be a grandmother. I was a teen mom, and I’ve been on the Local School Council (LSC) at Irving C. Mollison Elementary since I was 19. I’ve always had to participate in my children’s education. My mother did it for me, and when I became a mother, she pushed me to be responsible. She said *that’s your child. You’ve got to be a part of the school culture.* My grandmother was one of the first teacher’s assistants at Mollison, 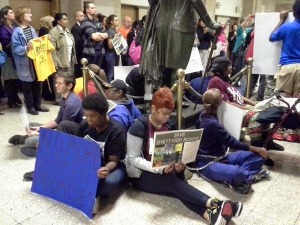 my auntie is a teacher there, my mother was on the PTA. She’s been a clerk at the school for 20 years. This isn’t the life I chose. It chose me.

For almost my entire life—34 years—I’ve lived in Bronzeville. I’ve recently been pushed out because of gentrification. I can’t afford the rent in the neighborhood, so for the last three years I’ve resided in Woodlawn. The transformation in Bronzeville started back in the 1990’s when they knocked down the public housing and began to build up the neighborhood. But what I started to notice was that when they put up replacement housing, it wasn’t for the people who’d lived in the neighborhood for years. So you’re pushing out the people who can’t afford to live there. If you’re not making $50,000 a year or more, you’re not able to afford to live in Bronzeville.

A line in the sand
There are currently 12 people on a hunger strike. Every day more people join us from around the city who’ve decided to go on a fast with us. We have a pastor, a Latino brother, we have a white brother whose community said *we don’t want a Noble Street charter in our neighborhood* and they left. He’s joined up despite the fact that this isn’t touching him. School closures haven’t really affected some of these other communities the way have us, but they took the charge to say *if these parents and community members can do it, I’m going to join them.* I have two other of my Local School Council members hunger striking with me, another active parent from my school, and an ex parent who helped me fight off two previous attempts to close Mollison Elementary. You’ve got people who’ve been in the community working and fighting for years who’ve said *enough is enough.* The line in the sand has been drawn and people have to answer for mistreating our young people.

You’ve got people who’ve been in the community working and fighting for years who’ve said *enough is enough.* The line in the sand has been drawn and people have to answer for mistreating our young people. 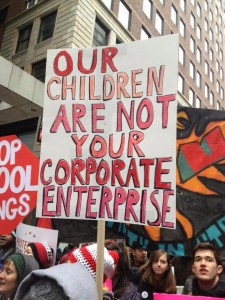 wrong. There are some good charter schools, but most of them aren’t doing any better than neighborhood schools. And they have no accountability. They have no Local School Councils. LSCs at schools are the people who hire and fire the principals and oversee the budgets. Nobody does that at charter or contract schools. These people are able to charge parents $10 or $20 when their kids don’t have a belt or a tie. Then at the end of the year when your grades aren’t good enough to make their profile look good, they get to kick you out and then you’re sent back to the neighborhood school.

We’ve got to look it in the face and call it what it is: racism. It’s only happening to a certain group of people. Period.

No stake in the community
Why should these people be allowed to set up shop? Because that’s what it is. They come. They’re here for four or five years. They have no stake in the community. They do nothing with the community. And then after they’ve made millions and millions of dollars but without educating our children, they leave. Charter schools are a way for bankers and billionaires to make money off of the poor. It’s racism. We’ve got to look it in the face and call it what it is: racism. It’s only happening to a certain group of people. Period. And I don’t care who that’s uncomfortable for, and who thinks I’m going too far by saying that. It’s the truth. I can’t find another reason. I pay my taxes like everyone else, I go to work everyday. I send my kids to school. So what is it? There’s no other factor. This is based on the color of my skin.

Connecting dots
I’m very discouraged that in 2015 parents have to go to this extreme for a neighborhood high school. People have to answer for that. What did Martin die for? What did Malcolm die for? How can we get the next Barack Obama? How can we get any of those folks if our kids can’t even be educated? They want to make everything private. I’m not crazy. I’ve been to New Orleans. I’ve seen the kids still attending schools in trailers while they got billions and billions of dollars. I’ve been to Philadelphia. I’ve been to Detroit. I’ve been to New Jersey to see the parents who are fighting in Camden. The connecting dot is that there is an attack on black and brown low-income working families.

Jeanette Taylor-Ramann is a member of the Local School Council at Mollison Elementary on Chicago’s South Side. She is one of twelve parents and community members on a hunger strike to keep open the last open-enrollment high school in Bronzeville.