Horse Hockey is defined as:

Welcome to beautiful Mackinac Island. Home to the annual Mackinac Policy Conference, this exclusive enclave is currently swarming with more than 1,500 businessmen, politicians and education leaders all gathered with one mission in mind: making Michigan a better place. The featured topic at this year’s event: education, including the fiercely urgent topic of how best to prepare young Michiganders (Miniganders?) to compete in the global economy. And who better to assist with that endeavor than education reform luminaries Michelle Rhee and Jeb Bush?  But wait—what’s that smell??? 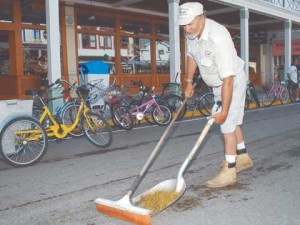 A street sweeper on Mackinac Island cleans up after talks by Jeb Bush and Michelle Rhee.

Reader: that scent you are detecting is what the French refer to as merde de cheval. You see, as cars are all but banned here, our distinguished guests will be relying on horse-drawn carriages to convey them about the island. And with seemingly every would-be reformer in the state on hand, not to mention a few bold visionaries from further afield, the island’s scenic lanes are likely to get pretty crowded. Watch your step, edupreneur!

Mr. Education
Kicking off the three-day-extravaganza is Jeb Bush, whose appearance was described in a local fanzine known as the Detroit Free Press, this way:

Bush is the first keynote speaker Wednesday, and he’s likely to talk about education. He’s made it one of his missions, starting the Florida-based Foundation for Excellence in Education that works to ensure children around the country are getting prepared for success in the modern economy. 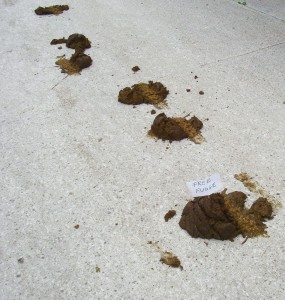 In other words, the head of an organization with the apt acronym FEE should feel right at home in a state where “reformers” have proposed such bold visionary measures as letting corporations open their own charter schools.

Free fudge
But wait, there’s more. The star of this year’s gala event may not be Bush or even edu-celeb Michelle Rhee but Governor Rick Snyder, who seems intent on returning public education in his state to an era that was actually horse drawn.

Gov. Rick Snyder will speak several times at the conference. Since he took office, Snyder has advocated making changes to the state’s K-12 and higher education systems — stressing accountability and reform in return for the billions of funds poured into education each year. Under his watch, Michigan has made some huge strides in the realm of education, such as changing the state’s antiquated teacher tenure laws and lifting the cap on university-authorized charter schools.

When we last encountered Governor Snyder, he was caught in yet more foul-smelling business: the aptly named Skunk Works. This secret cabal of bold visionaries was charged with coming up with a concept for cool new “value” schools, where Michigan’s formerly union-stifled students can ‘prepare for success in the modern economy,’ but at a budget price.

Horses first
As for Michelle Rhee, she’ll bringing a little extra horse hockey to an island that’s already got plenty. In other words, as Michigan’s StudentsFirst chair Andy Solon put it: “Michelle will continue to drive the discussion about education, making sure that businesses understand the skills gap and the need to drive innovation in our schools if we’re really going to have a better business climate and economic output.” On the plus side, Rhee may finally have found an audience that won’t badger her with questions about the Washington DC cheating scandal: Michigan’s politicians horses.

Are you attending the Mackinac Policy Conference? Send celebrity sightings to tips@haveyouheardblog.com.