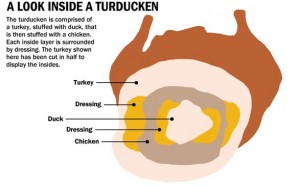 Reader: an idea for how to rescue our union-stifled public schools is generated roughly every 3.5 seconds. Most of these are almost nonsensically bad. Still, there is a category of edu-idea so catastrophically ill-informed, so stuffed with rephorminess and drenched with what the French call sauce privatisation that it deserves our special attention today. I give you rephorm turducken.

Lest you think that such a creature exists only in edu-mythology, I present to you exhibit A: the state of Michigan where legislators will soon take up a bill known as Mega School Choice (which does not sound ominous at all). The bill represents rephorm turducken in its truest form: one ideological crusade encased inside another, wrapped around a mega canard (which also happens to be the French word for duck) about “excellence,” “innovation” and “choice.” Edushyster premium readers: I am recommending an entire box of a particularly robust red to wash down this particular dish. Perhaps a Cabernet Sauvignon…

The steaming core of Michigan’s rephorm turducken is a voucher program that will allow students to purchase their educations a la carte (also French) from different vendors. The sweeping 300 page proposal that would replace Michigan’s 1979 School Aid Act is being served up hot and fresh by the Oxford Foundation, the head of whom, Richard McLellan, founded the right-wing Mackinac Center and served as a lawyer on the Citizen’s United case—on the corporations’ side.

The proposal includes plenty of familiar rephorm menu items, like a new statewide super-charter authorizer that will enable advocates of excellence and innovation to avoid the pesky inconvenience of community opposition. Michigan’s young customers students will also have mega choice about where to spend their edu-bucks. The proposal authorizes lots of tasty new charter school options: virtual charters, selective charters that can charge tuition and limit enrollment and my particular favorite—charters authorized by corporations. A bill that has already been filed in the Michigan House of Representatives would:

Permit employers to sponsor and support public schools and provide limited enrollment preferences for children of employees of the sponsoring employers.

Now this sounds like a TERRIFIC way to meet our shared goal of creating career-ready citizens and I can’t think of a single thing that could possibly go wrong. Can you? Now you are probably beginning to wonder about the philosophy behind these phantastic ideas. Reader: it’s called robust unbundling, as in ‘you will need to consume so much robust red wine in order to process this rephorm turducken that you are likely to come unbundled.’ Still, let’s give it a chance, shall we? You can read Oxford Foundation chief Richard McLellan’s robust memo describing the unbundling approach here.

You see, the existing public school model is a “bundled” model which is old fashioned and union-stifled and no longer makes cents in today’s bold new climate of freshness and innovation. By robustly unbundling the existing model, students can be full consumers of their education options while school operators can be robust consumers of tax payer dollars. Comprenez–vous? Merveilleux! And while big changes may be on the menu, Michigan’s rephormers see no need to spend time digesting the potential implications of the vast overhaul. The legislature will take up the proposal next week.

A final dessert item. Mega choice is being championed by Republican Governor Rick Snyder. He sends his own daughter to an exclusive private school, Greenhills, in Ann Arbor.

Send comments or questions to tips@haveyouheardblog.com.