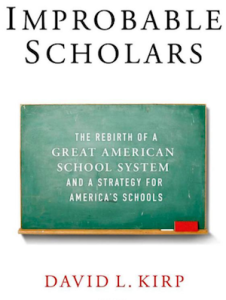 EduShyster: Let me try to break this to you gently. Your recent New York Times piece, Teaching Is Not a Business, didn’t win you a lot of friends on Twitter. In fact, one of your detractors referred to your entire oeuvre as *fatuous pablum.*

David Kirp: Wow—I seem to have provoked, not just outrage, but a mixed metaphor. Pablum, which is actually spelled pabulum, is something you eat.

EduShyster: Perhaps the point was that if one consumes too much pablum, one grows fatuous. I’m curious though, did you hear from any of your critics directly?

Kirp: None of them wrote to me. I have to say, by the way, that trust and community have been themes of my writing for many, many years and this is the only time I’ve provoked such intemperate responses. The emails I received from readers and the letters to the Times were overwhelming positive. The best letter I got asked a question that I think bears repeating: when you think about what most influenced you in your life or your choice of careers, how many of you point to the text book you read or the computer program you worked on? I think that’s a gorgeous way of putting it.

Kirp: With respect to choice, the studies coming out of Milwaukee, which has the longest-running voucher program in the country, don’t suggest that that city has been well served by choice. As for charters, they’ll be the subject of my next piece for the Times. I’m looking for examples of charter schools that actually do what Al Shanker wanted them to do, which is collaborate rather than compete. I’d love to write about good charters and am looking for examples, so if you or your readers know of these, by all means send them along. My view, by the way, is that the best of the charters are as good as the best traditional public schools, while the worst are worse than the worst public schools. But no one has figured out how to bring really great schools to scale without the structure of a school system. Does that sound like a declaration of war? I don’t think so. 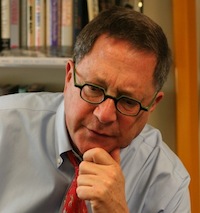 EduShyster: The title of your piece is Teaching Is Not a Business, and one of the ironies of this whole conversation is that the business models being imposed on schools have largely been rejected by businesses themselves.

Kirp: I actually think there are important lessons for school folks in looking at a business model that works, hence my shout out to Ed Deming. But that model isn’t creative decimation. If you look at businesses that have been successful over time, you’ll find there’s much less emphasis on booting out the bad guys then there is retraining. Proctor and Gamble hasn’t remained a very successful company because it keeps tossing out its leadership every three months.

EduShyster: A lot of this seems to come back to the question of how you drive change. You seem to think that trust is a more effective driver than, say, a boot to the neck.

Kirp: If you peel back the nature of this disagreement, it has to do with people’s fundamental views about human nature. If you believe that everyone is by nature a slacker and needs to be whipped into shape, then you come out on one side of the conversation. If you believe that, by and large people want to do the right thing and should be supported in doing that, then you come out on the other side. That’s a very old debate.

EduShyster: I come down on the trust side, largely because I worked with a leader who ran her district this way. She managed to produce some of the strongest results in Massachusetts but was completely ignored because she eschewed the boot. She’s the only leader like that I’ve ever encountered though. Also, she’s Canadian so doesn’t technically count. Are there other districts that are run this way?

Kirp: If you look at the strategies that successful districts have used, they emphasize trust and stability. Take Union City, NJ or Aldine, TX or Gardena, CA—they’re all run that way. Or speaking of Canada, look at Ontario and how it built its schools. It’s not about *throw out, throw out.*

EduShyster: I spend a lot of time visiting urban districts these days and I have to tell you that the late urban district, especially one tasked with its own unwinding, is not a place that inspires trust. If you talk to teachers in, say Boston, or Chicago or New York, they’ll tell you that the best they can hope for is a principal who protects them from the awfulness raining down on them from above. And most of them don’t even get that.

Kirp: You’re absolutely right. But I wonder if teachers in New York feel any differently now with Carmen Farina at the helm, and if not, how long it will take her to get her arms around that? If you want to see how Farina approaches this question of school leadership, check out the terrific book she wrote. It’s all about how you use collaboration and relationships to transform schools, and I can’t recommend it highly enough.

EduShyster: I invited people on Twitter to pose questions to you and this one comes via New Orleans. Your interlocutor wants to know if you can identify a place where test scores are the single metric of success. I picked this question, by the way, because it seems to reflect how differently people across the education reform divide view the world.

Kirp: Given the ever increasing role that test scores play in teacher evaluations, for example, the question does seem oddly posed. I think it’s beyond dispute that the role of test scores has increased enormously. Just look at the schools that have been closed, or the districts that are now under state review.

EduShyster: You’re not on Twitter, but I wanted to give you an opportunity to compose a tweet to your critics. You can say anything you want as long as you stay within your 140 character limit.

Fatuous pabulum (sp) is terrible mixed metaphor–and if my piece is pabulum-obvious, why are you so choleric? Has reasoned debate gone out of style? You’re better than these 140 characters.

EduShyster: I might have gone with a more subtle approach. But that’s just me…

David Kirp is the James D. Marver professor of public policy at the University of California at Berkeley and the author of Improbable Scholars: The Rebirth of a Great American School System and a Strategy for American Schools.