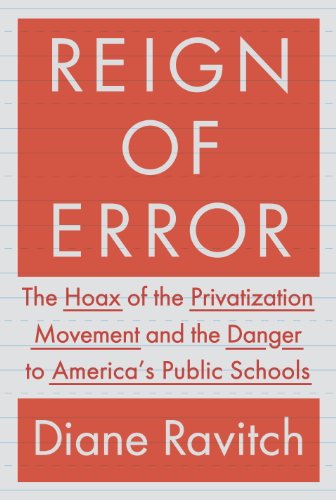 Can Diane Ravitch’s new book reshape the nonsensical debate about our public schools?

I first met Diane Ravitch when she was in Boston to promote her last book: The Death and Life of the Great American School System. The editor of a newspaper for AFT Massachusetts, I planned to interview Ravitch for the final issue of the school year. But I harbored a shameful secret: I hadn’t read the book. You see, “editor” doesn’t quite describe the job that I held. I was responsible for producing a monthly newspaper–entirely by myself. By the time Ravitch arrived, I was on my ninth paper of the school year, and completely fried.

But I had a plan. I’d skim the book on the train then, channeling my many years of graduate school, I’d wing it. Except that Ravitch turned out to be rather more formidable than I’d expected. This had the effect of causing the few questions I’d prepared to tumble out in a nervous rush, while her answers seemed to be of the short, definitive variety. When one of the event organizers poked her head into our conference room, summoning me out into the hall, I breathed a sigh of relief. There’d been a change of plans, she explained, and Ravitch’s next interview had been canceled. Did I mind keeping her entertained for the next two hours?

Reader: I can assure you that I have read her latest book, Reign of Error: The Hoax of the Privatization Movement and the Danger to America’s Public Schools. I tore through it, and I predict that you will too. I followed the man to whom I’m *technically* married around our house, reading aloud from Ravitch’s fiercely clear account and for once he didn’t pretend to be on a conference call. In fact, he asked to read the book when I’d finished. But it’s too late. Reign is even now hurtling towards southern Illinois where my sister has just begun her 23rd year as an elementary school teacher. She asked me to send it overnight mail.

If you’re reading this, chances are you know Ravitch as a blogger, the de facto leader of a growing grassroots movement to defend both the idea and the ideal of public education. But it’s Ravitch’s chops as an historian that provide such a contribution here. Claims that our public schools are failing and require drastic intervention go back as far as the ’20’s—the 1820’s, when reformers began to complain about poor teachers, low standards and incompetent school boards. Decade after decade, new claims of failure have been levied, new fixes proposed. (The contribution of business leaders to these debates over the years deserves its own farcical account).

But this time is different, I can imagine a contemporary reformer responding. And they would be right. As Ravitch explains, today’s corporate reform movement differs from previous incarnations in significant ways, and with potentially devastating implications for public education. What’s different this time isn’t just the unlikely alliance between “choice” advocates on the right and liberal achievement “gaptivists,” the outsized role played by hedge fund managers, or even the appearance of an alphabet soup’s worth of “grassroots groups,” all funded by the same handful of foundations. What makes today’s reform effort distinct, Ravitch argues, is its goal, what she characterizes as a “deliberate effort to replace public education with a privately managed, free-market system of schooling.”

The hoax in the book’s subtitle refers first and foremost to the deception that our public schools are in decline. As Ravitch documents in detail, test scores are at their highest point ever recorded, while high school dropouts are at their lowest point and more students are graduating from high school than at any point in American history. But the best hoaxes are impervious to facts and the one about our failing schools is no exception. If you live in Boston, for example, you are almost certainly aware that the public schools are in a state of precipitous decline. But unless you happened to catch a footnote that appeared in the Boston Globe last year, you probably have no idea that between 2003 and 2011, 4th and 8th grade students in the Boston Public Schools posted greater math gains than have ever been recorded in the 30 year history of the National Assessment of Educational Progress.

There’s another hoax here that can be found in the very language of corporate reform. You see, most Americans have a strong attachment to their community schools and believe in public education as a cornerstone of democracy. The corporate reform movement represents a profound threat to both, argues Ravitch, so must disguise its true intent beneath pseudo-populist rhetoric. Deregulation and privatization become “reform”; rigid reliance on standardized testing to measure teachers, schools and students is the neutral “accountability”; while virtually any scheme that replaces professional teachers, the single largest cost in public education, with a cheaper alternative is simply “innovation.”

Fully half of the book is devoted to solutions, and it’s a measure of how quickly the worm is turning on the reform debate that Ravitch’s vision reads less like pie-in-the-sky than real policy recommendations. Income inequality, at its most extreme since 1927, seems likely to replace the achievement gap as the fiercely urgent cause of our time, particularly as the gap between rich and poor students now dwarfs the race gap. And poverty, which we now know is not an excuse, seems much harder to ignore when everyone is talking about it.

When I met Ravitch again in New York last spring the context was very different than our first encounter. For one, I was now the blogger known as EduShyster. I’d become something of an expert on corporate reform having seen it close up the previous year when Stand for Children, inspired by Massachusetts’ unusual ballot question process, had returned here to launch its Great Teachers, Great Schools campaign. Stand hired signature gatherers to patrol the parking lots of grocery stores, asking patrons if they thought that every student deserved a great teacher. More than 70,000 did, and the result was a densely worded, five page ballot question that contained not a single mention of children.

Ravitch and I spent a couple of hours together on a cold spring morning, and I was struck by how upbeat she was. While I poked fun at the corporate reform movement on my blog, offline I often despaired. But she could already see that the movement was beginning to groan beneath the weight of its many contradictions, and that a day of reckoning wasn’t far off. (Even as I write, for example, two of the most prominent state-level reformers, Tennessee’s Kevin Huffman and Louisiana’s John White, are said to be updating their LinkedIn profiles and “reaching out” to explore opportunities in a state that hopefully isn’t yours).

Ravitch also expressed confidence that her then forthcoming book would succeed in changing the terms of the debate and refocusing attention back onto what public schools and the children they serve need to succeed. I found this almost impossible to fathom, an opinion that I maintained (albeit never expressed) until last week when I turned Reign’s final page, roughly a day and half after I’d started reading.

Reader: I think she was right.