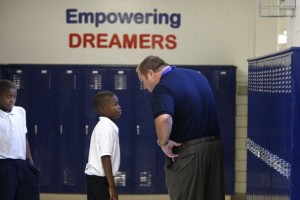 A middle-school student at a ‘no-excuses’ school in Memphis.

For tens of thousands of black and brown students who attend what are billed as “college-prep” academies, today’s return to school begins as always: in straight, silent lines. For these students, more and more of them in our cities every day, school is now synonymous with control. While the specific systems of rewards and punishments vary from one urban charter school to another, the premise is the same: poor minority children must be made to be compliant. Resistance is met with still more punishment until the lesson is finally learned: compliance = success. No excuses.

A brief history of ‘no excuses’
The label ‘no excuses’ to describe urban charter schools that use a culture of control to extract high scores on standardized tests originates from the right-wing Heritage Foundation. But the no-excuses cause gained real momentum with the 2003 publication of No Excuses: Closing the Racial Gap in Learning by conservative academics Abigail and Stephen Thernstrom—two of America’s whitest writers, as it happens. In search of what charter advocates are fond of calling “the special sauce,” the Thernstroms set out from their leafy Massachusetts suburb to uncover the mysteries of high-performing, high-poverty urban schools and liked what they saw:

These schools are not waiting until the day social and economic disparities disappear. “No Excuses” is their relentless message. Every student is expected to work hard to acquire the skills and knowledge that tests measure…Those [schools] we came to admire set social norms that create effective learning environments. Students learn to speak politely to the principal, teachers, and strangers; they learn to dress neatly, to arrive at school on time, to pay attention in class, finish homework, and never waste time. Teachers work hard to instill the desire, discipline, and dedication—the will to succeed—that will enable disadvantaged youth to climb the American ladder of opportunity. These are essential ingredients in the definition of effective education for high-need kids.

The Thernstroms get into the matter of WHY minority students require a compliance-based approach to learning later in the book (see black youth, too much TV watching by, chapter 4, and Asian culture, superiority of, chapter 5). The topic of why black and brown children must be educated differently than their white peers is one that the no-excuses schools and their advocates prefer to steer clear of; it is dangerous, queasy-making stuff. Instead they focus on the specific ingredients that make up the high achievement stew: longer school days, weeks and years for students, what one academy bills as “Wall Street like hours” for teachers, and an elaborate architecture of punishment, complete with a monetary-based system of rewards for compliance.

Leveraging success
The speed with which these schools have become the urban education ideal is nothing short of astonishing. (For example, 9 of the 11 proposed new charters in Massachusetts are no-excuses schools, including the Argosy Collegiate). While the schools themselves are often the subject of fawning media coverage, neither the no-excuses philosophy nor the schools’ punitive culture has received much scrutiny. The difficult subject of race that underlies the philosophy, meanwhile, is barely mentioned at all. I’ll put it bluntly. With a few notable exceptions this is largely a movement driven by white people—from the young teachers who staff the schools, to the advocates who serve as flacks, to the funders who underwrite their expansion, to the edupreneurs who now seek to “scale up” and “leverage” the schools’ success and earn a hefty return in the process.

The coming revolt
The potential explosiveness of this race dynamic has been on vivid display in Memphis recently, where parents are demanding an end to what they say are humiliating and demeaning disciplinary measures at a former public elementary school turned no-excuses charter. Lester School, a historic African-American elementary school with a large population of Muslim students, is now being operated by Cornerstone Prep, a church-based charter school that is staffed almost entirely by young white teachers and headed by the former comptroller at a copper tube manufacturing company. Parents and community activists say that the school’s insistence on silence and compliance, including forcing children who fail to ask permission to tie their shoes to go barefoot, is culturally reprehensible.

“There are so many similarities to segregation and slavery connected to this because of how it is being played out. You know, coming in and taking over, not trying to get any input and wanting everyone to be quiet…[W]e did not have shoes in slavery. There’s a major comparison right there.”—Chan Douglas

Culture change
Like a growing number of American cities, Memphis has begun handing its formerly public schools over to outside operators. I’ve written elsewhere about the reform effort in Tennessee, one dominated by handsomely paid outsiders, who will accept no excuses in their efforts to see the bottom 25% of Tennessee’s students skyrocket to the top 5% in five years. But as Abigail and Stephen Thernstrom know well, that will require a transformation of the urban students’ culture. At Cornerstone Prep, for example, the kindergarten through third graders must be inculcated with the value of time itself.

The pace may be frenetic action, judging by the stopwatches Cornerstone teachers wear to time even simple tasks while chanting an almost mesmerizing mantra of praise and encouragement. Cornerstone teachers work the line for the bathroom, quizzing children on addition and subtraction tables.

Outside investors
The objection of many of the parents seems to be that essential decisions regarding their children’s education are now being made by rich, white outsiders. They’ll have to get used to it—many more such outsiders are eager to invest in their children’s futures. Among them, the leaders of Facebook, Skype, Benchmark Capital and Netflix, all of whom are major investors in the no-excuses charter chain Rocketship Education.Tennessee will soon be home to ten Rocketship charters that use computer-based classes to boost test scores but offer no music or art classes. Parents haven’t yet been asked how they feel about that…

Should we be willing to use “any means necessary” to close the achievement gap? Talk back to tips@haveyouheardblog.com.