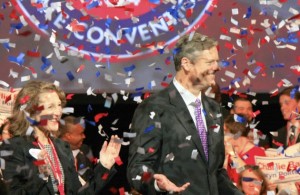 It’s a new day in Massachusetts, reader. And the Bay State’s new captain, Charlie Baker, has a bold new plan to at last un-stifle our long-suffering schools: fresh New Schools. But there’s a hitch, or rather a cap. You see, Massachusetts has a cap on fresh New Schools that Governor Baker must figure out how to uncap in order to give the people New Schools, whether they want them or not. Now he could move to boldly seize another entire school district, a la Lawrence, as the state is said to be days from doing in Holyoke, and impose New Schools. Or Baker could go the legislative route and use the bully pulpit to push lawmakers to uncap the cap. But democracy is soooooo old school, especially when it comes to a cause as fiercely urgent as replacing our old schools with fresh New Schools.

A New Schools kinda guy
Wait—I bet Jim Peyser has some ideas. In case you missed it, Peyser, nee New Schools Venture Fund, is our new Secretary of Education. And you probably did miss it; his appointment was announced on Christmas Eve eve.

Last spring Peyser gave a talk at the Philanthropy Roundtable in Boston in which he laid out a vision for how Boston in particular could shrug off that pesky charter cap once and for all. (Note: I dreamed of attending this event but it was only open to individuals who *disperse* at least $100K a year.) Peyser offered some words of advice to Boston’s mayor: man up and give the people charters already. And he urged Boston’s charter schools to *take control of their own destiny by becoming a more potent political force.*

And lest attendees needed help envisioning what that potent political force might look like, New York’s Eva Moskowitz was on hand at the same event to tell the inspiring tale of how she’s built a parent-powered lobbying army by shuttering her chain of charter schools on marching day and requiring teachers and staff to attend.

All in the families
Thanks to an infusion of more than $1.2 million, Boston now has its own 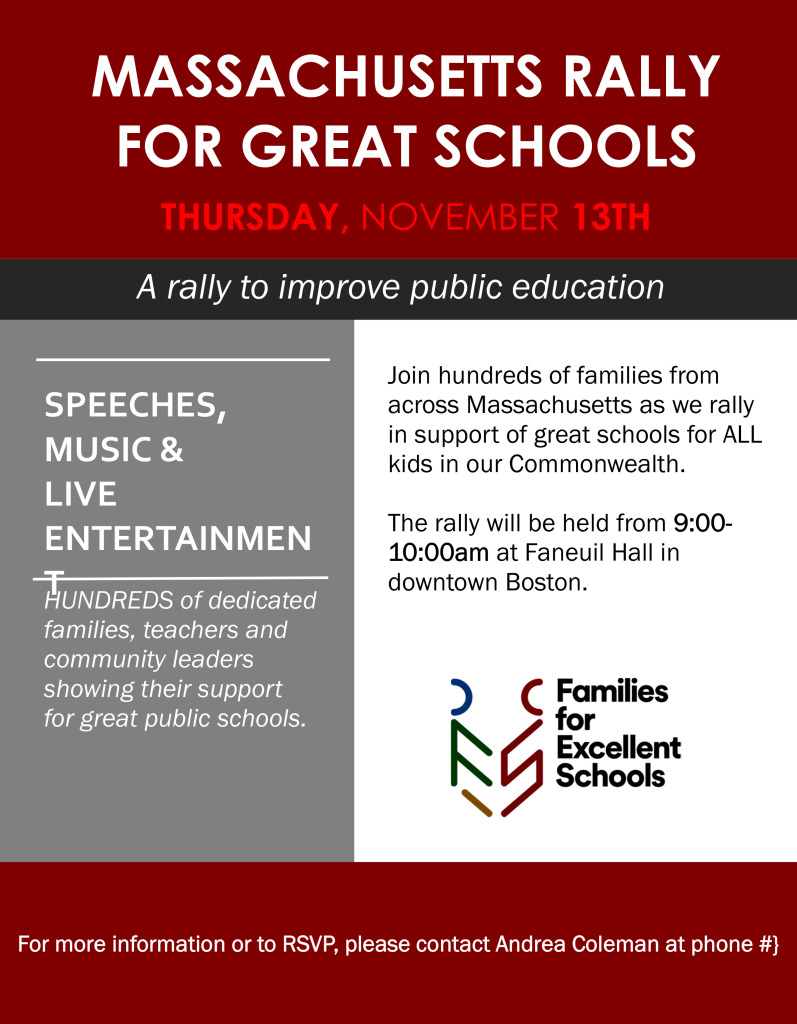 offshoot of Moskowitz’s lobby group: Families for Excellent Schools. In addition to an $800,000 start-up grant from Strategic Grant Partners, the organization also received $400K from Peyser’s organization, New Schools Venture Fund, as part of the Boston *portfolio* that Peyser oversaw until about 15 minutes ago. All that grass has quickly paid off for the grassroots parent group. They held their first Boston event in November, calling on then Governor-Elect Charlie Baker to * to take bold action to make every school in our Commonwealth an excellent school.* And they found a new BFF in Boston Globe columnist Scot Lehigh who didn’t seem to think it was strange at all that students were out of school to demand, among other things, a longer school day—or that none of the group’s messaging actually mentioned charters.

Parents on porches
We’ll be hearing a lot more about Families for Excellent Schools. In fact, for a preview of what Massachusetts is in for, look to NYC, where the lobby group spent nearly $3 million in September and October. The bulk of that money, by the way, went to an advertising firm responsible for the pro-charter ad blitzes that are no doubt on their way to the Bay State. Meanwhile, Governor Baker has already indicated that he plans to put parents front and center in his agenda for education excellence—well some parents. In his inaugural address, Baker summoned forth a hypothetical parent standing on a front porch who wants a better education for his or her child.

It’s wrong for any of us to stand on a front porch or in a city neighborhood sympathizing with a mom or dad when they tell us their child is not getting the education to succeed in life and then oppose lifting the charter school cap or making the changes we need to ensure that every school is great.

Here’s my question, Charlie. Did you catch the part where the parent mentioned that the local neighborhood school is being hacked to bits by budget cuts? Or where the parent wondered why definition of *excellent school* seems to be so different in, say Mattapan, vs. Wellesley? Did the parent suggest that it might be time to revisit the state’s outmoded school financing system? Anything about art or music or the kind of electives that kids in the state’s affluent suburbs take for granted, but are all but gone, even in what you consider *excellent schools* in the cities? Did the parent suggest that maybe all kids in Massachusetts should get the same kind of education that your kids got, Governor Baker?

I didn’t think so.