Editor’s note: I recently wrote about the much-hyped Springfield Empowerment Zone, arguing that there isn’t enough *there there* to merit its coronation as the next big thing, and that the zone’s eye-popping suspension numbers are a serious red flag. Brett Alessi, head of Empower Schools, the nonprofit that is helping to empower the Empowerment Zone, responded and asked if he might respond to my piece, giving readers a fuller account of what’s happening in Springfield than my *negative Nancy* portrayal. (My description, not his). I eagerly obliged but requested that Alessi focus on the two specific issues I raised: the high student suspension numbers in the Zone’s schools, and whether the push to *scale up* the Zone is warranted given that the Zone has yet to do what its architects claimed that it would do. Alessi’s response is below, and my response to his response is below that… 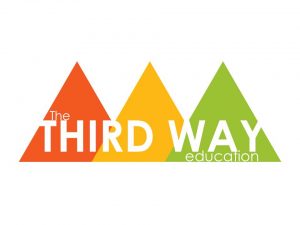 First, I’d like to start by saying that while we don’t always see eye-to-eye, I have really enjoyed our exchanges and appreciate the opportunity engage in a genuine dialogue.  At the end of the day, I believe that what we both care most about is ensuring that all children have the opportunity to be successful.

In response to your recent post, I’d like to point out that prior to forming the Springfield Empowerment Zone Partnership (SEZP), the schools that are now in the Zone were in the bottom 3 percent of middle schools in Massachusetts. Five of the nine schools (Chestnut South, Chestnut North, Chestnut TAG, Kiley, and Kennedy) had been in Level 4 status for the past three years, did not show any notable progress, and were at risk of being labeled Level 5 and placed into receivership. The other four schools (Van Sickle Academy, Van Sickle IB, Duggan, and Forest Park) were recently designated Level 4.

Springfield Public Schools tried a number of interventions and models to improve these middle schools, but they had not been successful.  To his credit, Superintendent Warwick, a former teacher and school leader, recognized that staying the course was not an option for the children in Springfield.  He noted that, *We’d had success turning around some low-performing schools, but not the middle schools, so it was clear we had to do something different.*

While the Zone was just put in place, we are seeing promising signs.  Our two-year goal is for schools to reach a median Student Growth Percentile (SGP) of 50 or higher in both ELA and math.  None of our schools reached that goal early after the Zone’s first year, but on three of the state’s primary measures, including rate of meeting standards, composite performance (CPI), and growth (SGP), schools did show gains over the previous year.  While we would be the first to say that those gains are not good enough, we are a bit more than halfway through the second year and hopeful that a number of schools will reach the ambitious two-year goal on schedule this year.

And we believe there is reason for this optimism. The educational strategy for schools in SEZP is modeled after the turnaround effort in Lawrence, which has shown some of the most dramatic gains in the country.  Prior to state receivership, 8% of Lawrence students attended a Level 1 or 2 school, today 45% of students do – a 4x increase over four years.

While we are optimistic about the path ahead, anyone who has worked on the ground with struggling schools knows that this work is incredibly hard and that change takes time.  As you point out in your post, challenges remain.  For example, the suspension and chronic absenteeism rates are truly alarming. Yet, we are making progress and are committed to being transparent about the data.  Since the inception of the Zone, the suspension rate in SEZP schools has steadily declined. Last year’s suspension rate was slightly lower than the previous year. And schools are on-track to reduce the overall suspension rates for a second year in a row.

One of the things we are most proud of in Springfield is the role that locally elected and appointed leaders, as well as educators themselves, have played in the design and implementation of solutions to address persistently struggling schools.

The elected school committee voted 6-1 in favor of empowering educators, who know their students best, to make key decisions about their curriculum, culture, schedule, budget and staff so they can ensure each of their students has a chance to be successful.  92% of teachers in the Zone ratified an agreement that provides increased teacher voice along with fair compensation and important labor protections.  The collaborative nature of this work is a testament to everyone who has been involved – – the Superintendent and other administrators, the Mayor, elected School Committee, the Springfield Education Association, teachers, parents, and the broader community – and is in stark contrast to the all-too-often, unfortunate dynamic of adults pitted against each other in unproductive ways.

Results from a research-tested teacher survey[1] suggest that SEZP’s autonomy and greater opportunity for teacher voice are leading to stronger school and instructional cultures that better support, attract, and retain great teachers.  We know that teaching is extremely hard but also essential and we need and want educators to feel valued. All teachers in the Zone began completing the survey in Year 1 (2015-16) of SEZP and saw significant improvement after one full year in the Zone – which is perhaps even more remarkable given that periods of change can often be complicated and bumpy. 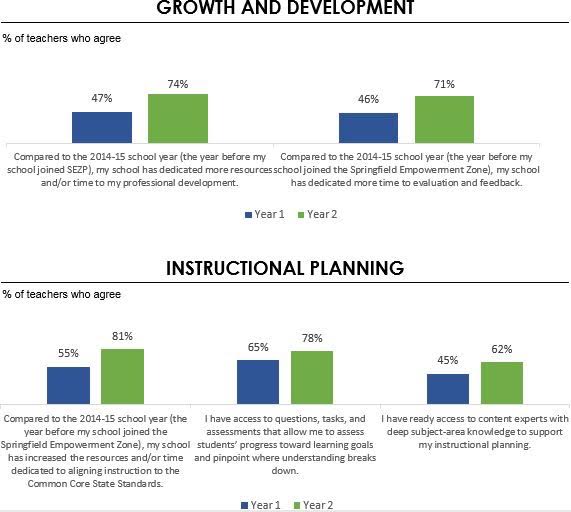 Is the SEZP ready for scaling across the state?  Frankly, that is not up to us.  Legislators make those decisions and I know Senator Lesser, for example, has been keenly interested in learning about how the Zone is working out in his backyard.  I’m guessing he has heard some good things and seen promising signs like the fact that the School Committee recently voted to place another struggling school in the Zone, which seems to suggest that locally elected officials are encouraged by the Zone’s progress-to-date.

I also think it is a good thing for communities to have more alternatives to either the state continuing to take over persistently struggling schools – or inaction for those same schools, which doesn’t seem like a viable path for students or Massachusetts taxpayers.  What is happening in Springfield is not the Dever.  It is not a state takeover (as an aside, we were not involved with the Dever.  We partnered with Blueprint to turnaround the Bentley School in Salem which was recently named a Level 1 school).  Furthermore, as the legislation is currently written, neither districts nor the state would be required to use it.

While we are not yet sure if the Zone will translate into the student success we are all looking for in Springfield, it is based on Lawrence’s tested educational strategy, empowers educators, and has the support of the Mayor, school committee, superintendent, union, teachers, and community.

We are eager to learn more about other promising approaches that effectively empower educators and engage the community, and lead to better outcomes for students.  In the meantime, we would love to host you in Springfield so that you can make your own judgment about the SEZP.

Thank you again for the opportunity to share our perspective.  We look forward to continuing the discussion.

Brett Alessi is the co-founder and managing director of Empower Schools.

[1]This survey produces an Instructional Culture Index (ICI) which is a validated, summative measure of a school’s instructional culture that can be used to compare schools. ICIs are on a scale from 1 to 10. Research has shown that schools with strong instructional cultures retain more of their effective teachers and achieve greater academic success with students. Independent studies have shown that schools with bottom-quartile ICI’s tend to lose twice as many of their effective teachers in the next two years, while in top-quartile schools student proficiency rates are 21 percentage points higher in math and 14 percentage points higher in reading 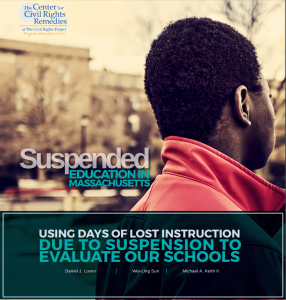 Brett: thanks for this response to my piece, the Next Big Thing, and my apologies for omitting the *P* from the SEZP acronym. It won’t happen again! As for the specific concerns I raised, I will confess that your response has left me feeling decidedly unassuaged. First, on the issue of student discipline. The Center for Civil Rights Remedies at UCLA recently released a report entitled *Suspended Education in Massachusetts* in which researchers used state data to tally the schools where students are missing the most days of instruction due to suspension. Five of the SEZP schools were among the top 30 schools in the state for that dubious honor. And all but one of the SEZP schools make the top 50 list of schools where students miss the most days of instruction. That’s out of more than 1,900 schools in the state. While these numbers have dropped since the previous year at the three Chestnut schools and Forest Park, the number of missed days jumped at the remaining SEZP schools. (The complete 2015/16 data is available here. Previous year’s data is here.)

As the UCLA researchers found, the students who are missing school, including at the SEZP schools, are often being suspended for minor behaviors. Which raises some not so minor concerns. While there is lots of room for debate over school reform and theories of change, it’s hard for me to understand how you ensure that each child has a chance to be successful while pursuing school policies that keep them from attending school.[2] And why is it that the much vaunted school leader autonomy that’s at the heart of the SEZP model seems to have resulted in virtually all of the school leaders following this contradictory path?

Now, onto the issue of whether the SEZP is ready for scaling across the state. You responded: *frankly that is not up to us. Legislators make those decisions and I know Senator Lesser, for example, has been keenly interested in learning about how the Zone is working out in his backyard. I’m guessing he has heard some good things…* I’m guessing that he has heard some good things too! Take for example this *news* story in Lesser’s local news outlet entitled *Education reform leader touts Springfield Empowerment Zone as model program for struggling schools,* in which your colleague Chris Gabrieli touts the SEZP as a model program for struggling schools. But are you really making the case that the legislative effort to take the Zone to scale emerged, um, autonomously? Because one gets the strong sense from reading the story I just cited that your organization is empowering operation scale up, and that the statewide scale up is already being scaled up for nationwide release. Meanwhile even some of your local stakeholders are questioning what’s really behind the push for expansion.

Which brings me to my final (finally!) point. I’m not a straight-up SZEP hater. I’m sure there are positive things happening beyond the alarming disciplinary data and the full-scale PR assault, and I’m a big believer in giving teachers (and students) more voice. But my time spent chronicling the efforts to find an education *fix* for the deep, deep challenges of poverty and segregation has taught me a thing or two. Like that when the sales pitch and the scale-up plan get way out ahead of what is actually being delivered, there’s trouble in store.

I’d be happy to come to Springfield for a visit. Maybe we can stop off in Lowell, site of a very successful (though almost never mentioned) teacher-led school turnaround…

[2] Researchers found that students who miss more school than their peers score lower on the National Assessment of Educational Progress, regardless of the age, income or race of the students. (Ginsburg, Jordan, & Chang, 2014).