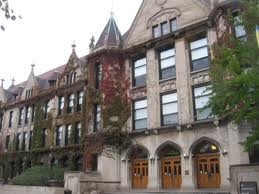 The University of Chicago Lab Schools which Arne Duncan attended from K-12.

Reader: you are almost certainly aware that our Secretary of Education, Mr. Arne Duncan, has many excellent ideas regarding how to enhance the excellence of our failed and failing public schools. But did you ever pause to ask yourself *from whence did those ideas come?* It’s field trip time and our destination is none other than the very school that nurtured young Arne’s spirit: the University of Chicago Lab Schools, the bastion of progressive education founded by none other than John Dewey himself in 1896. And since I know that you are, at this very moment, administering a high-stakes test, I recently took it upon myself to drop in on the school on your behalf. 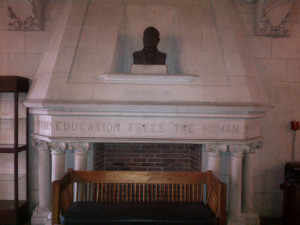 Francis who?
My tour starts, where else?, at the entrance to the Lab Schools, where Francis Parker awaits ready to greet me. Who is Francis Parker, you ask? Only the father of progressive education who hated on all things standardized and rote, not to mention rejecting discipline of the harsh variety. If neither Parker’s name nor his *whole child* legacy rings any bells, don’t feel bad. Young Arne no doubt passed by Parker’s bust with its bold declaration that *True education frees the human spirit* countless times in his 13 years at the Lab Schools. Meanwhile some of Chicago’s most prominent reformers, bearing names like Pritzker and Emanuel, see Parker regularly as they drop their own whole children off here to be progressively educated. 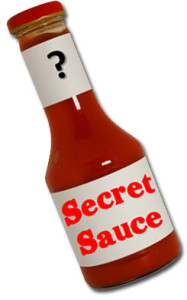 Secret sauce
The next stop on my tour is obvious: I demand to be taken to wherever the secret sauce is kept, the elixir of excellence that has made the University of Chicago Lab Schools a top performer for more than 100 years. And there is no shortage of secret sauce storage spots to visit. There are the small classes, which, capped at 24 students, are far smaller than any I encounter on my visits to a half dozen Chicago Public Schools. There are the three libraries, staffed by certified middle school and high school librarians, and encompassing 40,000 volumes. And there is the new art complex, still under construction, that will feature a theater-in-the-round, plenty of naturally lit art studios and spaces for students to collaborate on creative projects. In other words, the Lab Schools’ is the kind of secret sauce that I’m pretty sure all students would savor. And yet the ingredients seem so different from the recipe for excellence so oft touted by the very Lab School alum whose size 13 footsteps I am here to retrace… 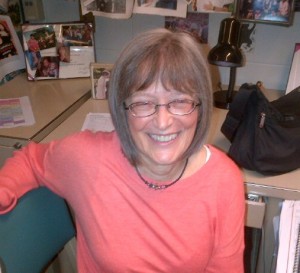 It’s time to meet Arne’s favorite teacher
The students I talk to tell me that their teachers are the real secret to the secret sauce. As one ninth grader explains: *Our teachers have character; they’re not automatons.* [Note: automaton is a *high-utility* vocabulary word and thus approved for inclusion in the new enhanced SAT]. One of these teachers is none other than Darlene McCampbell, whom Arne Duncan recently named as his favorite. As luck would have it, she’s here today—in fact she’s been here almost every day for the past 49 years, teaching writing, storytelling and literature. I’m going to type that once more for effect: Darlene McCampbell has been teaching at the Lab Schools for 49 years. After talking to her for a few minutes, I can tell that she would be my favorite teacher too. Fortunately for the current crop of Lab students, she has no plans to abandon them. *I’ll stay as long as I keep loving it,* says McCampbell.

The other side
By the way: Campbell isn’t even the Lab Schools’ longest-serving faculty member. That honor goes to Wayne Brasler, who heads up the journalism department and has been here for 50 years. He remembers Arne Duncan from his elementary school days—but there’s another reason I’ve been looking forward to meeting Brasler. He’s also a psychic and a medium. *We’ve met somewhere before,* he tells me when I finally locate him, deep in the Lab Schools’ basement warren. I perk right up. *In another life???* I ask, hopeful that my previous existence was college and career readier than this one has turned out to be. *No—in this one.* Today though Brasler doesn’t require any special powers to foresee that the future of public education looks pretty bleak. In addition to his work here he also edits one of the country’s only high school alumni newspapers, for Missouri’s Normandy High School, outside of St. Louis, which he once attended. He’s just put the finishing touches on the very last edition. The school and its district are broke and are being disbanded at the end of the year. 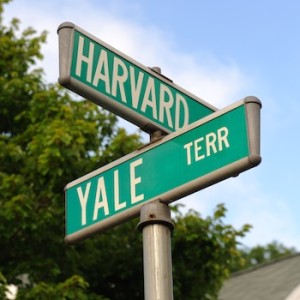 Gr8 expectations
The ironic thing is that I came to the Lab Schools in order to see for myself the kind of progressive education in which young Arne Duncan blossomed, and yet the forces of Duncan-style education reform can still be felt even in this idyllic private school setting. Darlene McCampbell, for example, tells me that she worries that teaching is rapidly becoming less of a career. Other teachers note that the culture of the school is shifting to meet the expectations of wealthy parents from Chicago’s North Side for whom college readiness means an Ivy League school. There’s even a debate here about aligning parts of the curriculum to the Common Core. And while students here have no standardized tests to opt-out of, the faculty union (teachers belong to the AFT), recently issued a statement showing support for Chicago Public Schools teachers and families who chose to skip the ISAT. 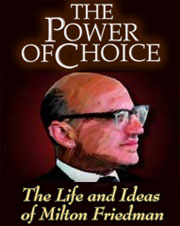 The Chicago school
My visit to the Lab Schools was nearing its end, and while I’d learned all about progressive education—and encountered gallons of secret sauce—the more I found out, the harder it was to connect the school’s tradition with the alum who’d drawn me here. Was it possible that my search for insight into what makes Arne Duncan tick had brought me to the wrong place? Historian Paul Horton thought so, and he was eager to escort me to a more appropriate location: the University of Chicago Booth Business School, located just a stone’s throw from the Lab Schools. *The market is like a religion here,* says Horton. And while you may not recognize the Chicago School of Economics by name, you feel its influence in countless ways, most notably in the market pressures that are, at this very moment, bearing down upon what’s left of your public schools. In fact, to stand in the middle of the two institutions is to occupy a battle of ideas between two completely different visions of the world: team Dewey vs. team Friedman. I don’t think I need to tell you which one is winning.