A Boston school turnaround spins out of control… 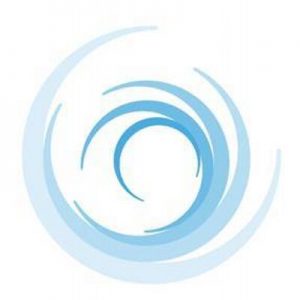 Today’s topic: what happens when state officials hand a school whose students are among the highest needs in Boston to a team of outside turner-arounders who have never before run a school? The answer, as this week’s Boston Globe report indicated, is nothing good. But might there be more, by which I mean less, to this story than meets the eye? Grab your handrails, reader, and steer clear of the fairground corn dogs. Things are about to get awfully spinny around here.

heeled (not to mention politically connected) suitor: Blueprint Schools. Lest one think that this arranged marriage was rash, well it wasn’t. You see, various attempts had already been made to turn around the troubled school, including a good old-fashioned browbeating of its teachers by none other than his nibs himself: the state’s Commissioner of Career and College Readiness, Mitchell D. Chester.  It was time to let someone else have a try…

The Dever’s new partner immediately *made waves,* as Globe writer James Vaznis reports, by asking the teachers and staff at the school to re-apply for their jobs. Or make that re-re-apply. Teachers at the Dever had been handpicked under the previous turnaround effort, which gave the previous autonomous school leader the flexibility to weed out teachers he didn’t like or who disagreed with the turnaround strategy. But that was the past, and unlike the previous turnaround attempt, Blueprint meant business, and not just in the edupreneurial cents. Out with the old new and in with new Blue. Or something like that.

Alas, the path to college and career readiness got off to a rocky start. It turns out that when it comes to running a school, experience running a school can be of some help. Alas, alas, there was no time for that and so Blueprint did the next best thing and brought in a 20 something TFA-grad to oversee hiring to staff the Dever’s re-turnaround. Along with a new principal from the Rockies who brought along a pricey new non-Common Core-aligned curriculum, which left the new new staff at the Dever, um, puzzled.

Now I see, or rather hear, where things went so wrong. Somewhere in the process of implementing state Board of Education member Roland Fryer’s Blueprint for success, *principles* were mistaken for *principals*… School leaders weren’t the only leavers, by the way. The new new teachers were fleeing too—sixteen in the last year alone.

Hello fellow
Well at least Blueprint’s highly touted math fellows program was producing consistent results. *I would say the math fellows program has shown great promise and great progress,* Greta Martinez, Denver’s assistant superintendent for post secondary readiness, told the Globe. Except that she was referring to *Denver,* not to the *Dever,* where the math fellows were utilized only in the fourth grade, and which saw math scores drop precipitously as you can see by clicking first on this link and then on this link.

Whatever it takes.
Alas, our sad turnaround tale has yet to reach its nadir. There was the time that teachers stumbled upon this school website, which is how they discovered that *grit* is a Dever/Blueprint core value, and that their autonomous leaders (wherever they are) seemingly don’t know the difference between *principals* and *principles.* Or that the *students* pictured on the *school* website are not actual students who attend the actual school. Immerse yourself in the website, reader, and you will encounter, in addition to stock photographs, the sort of edu-spin jargonics that Blueprint traffics in: *college and career readiness* in place of chaos, *world-class education* rather than state-sanctioned abandonment, and empty slogans (Whatever it takes. Every child. Every minute. Every day.) instead of an actual blueprint.

Turnaround runaground
If you notice that I seem a bit het up here, you judgeth me correctly, reader. You see, I started hearing from teachers at the Dever this spring, who, having failed utterly to get Blueprint itself or state education officials to respond to the increasing turmoil at their school, reached out to me. *We’ve lost faith because there’s absolutely no accountability here,* one teacher told me. *Blueprint has no idea how to run a school, and it’s maddening that there isn’t more oversight from the state. Who is advocating for these students? It all feels like it’s headed to a terrible implosion.* I even heard from a teacher at the school next door to the Dever, worried about what the continual tumult means for students whose lives are already so tumultuous: At a school where a ton of students have experienced trauma in home and community, this much transition in school is a set-up for additional trauma.

*We’ve lost faith because there’s absolutely no accountability here,* one teacher told me. *Blueprint has no idea how to run a school, and it’s maddening that there isn’t more oversight from the state. Who is advocating for these students? It all feels like it’s headed to a terrible implosion.*

If you’re wondering what exactly the state officials who *received* the Dever now two years ago make of a turnaround careening off the rails, this *progress report,* released about the same time that I received an SOS signal from teachers at the school, tells you all you need to know. I recommend pairing the rosy report with a hefty splash of rosé AND this TNTP Insight report completed by Dever teachers, which paints a dire picture of a school turnaround run aground.

Who will advocate for the edupreneurs?
Which brings us at last to the real question raised by this grim story-behind-the-story. If there is no one to advocate for the Dever’s students, families or teachers, can we at least find someone who will advocate for Blueprint? Why yes, reader, we can. Blueprint can advocate for Blueprint, and based on change that has continued to flow into Blueprint’s coffers and the lack of a price the Blueprinters have paid for, um, not having a blueprint, Blueprint’s advocacy appears to be proceeding apace. So I leave you with this glimpse into what’s on the minds of the Blueprinters, that is when they’re not thinking about *equity* and *improving life outcomes for students.* In a word, reader, they are thinking about Blueprint… 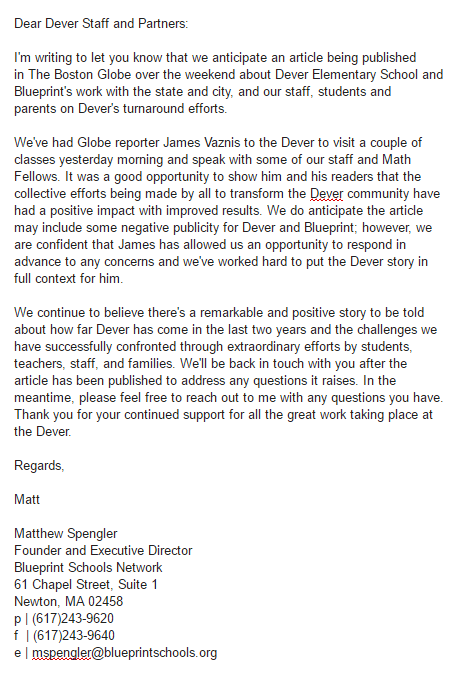 Send tips and comments to jennifer@haveyouheardblog.com. Like my work? Your support will help me do more of it.