Boston students walk out and speak up… 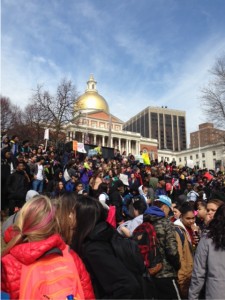 What’s that, reader? I’m afraid you’ll have to speak up. I’m surrounded by 2,000+ Boston students who are screaming *student power* and *no cuts* at the top of their young lungs. Pissed off over proposed cuts to their schools, the students walked out of their classrooms and into the streets yesterday for the biggest student protest in recent memory. My goal was to talk to as many of them as possible in order to get a sense of how they see the city’s increasingly bitter school wars. I came armed with my tape recorder and lots of questions: like why did so may of their signs seem to disparage Mayor Marty Walsh by name? And since so many grown ups agree that charter schools rule, shouldn’t we just have more of those? And, come on, who’s really behind this??? Fortunately the students I talked to—from 15 different Boston high schools—were eager to share their thoughts. Shall we hear from some of them now? 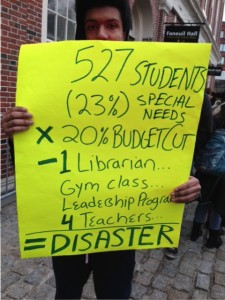 Mad full
My strategy was simple. Any time I spotted a sign I liked, I’d ask the student what was behind it. Like this young man who’d walked out of Boston Community Leadership Academy, one of Boston’s many small high schools, to protest the fact that his school is facing cuts of such depth that its Leadership Academy, which is, um, in the school’s name, is on the chopping block. He’d taken the time to write down the proposed cuts on his sign, which I am helpfully transcribing here: a 20% total budget cut, meaning the loss of at least four teachers and a librarian. He ran out of space before he could list the other cuts: AP classes, free SAT prep… *We’re losing our library and we’re not going to have a leadership program, which is basically what our school is about,* 10th grader Shaylin Cheney told me. *Our classes are going to be mad full,* her friend added.

Boston school budget talk can often sound like a nonsensical mix of numbers and talking points run through the pulse setting of a food processor. Spending is up! No, wait, the problem is shifting priorities. Hold that. It’s those Lamborghini-driving teachers, yo. But the students I talked to had an amazing ability to tune out the noise and explain in very clear language what cuts have been proposed for their schools, and what will happen to them and to students like them as result. Here’s a student from Boston Arts Academy who identified herself only as Jackie. *We’re going to have to struggle to apply for colleges because what are we going to have to represent ourselves? We won’t have extracurricular activities because they want to cut them.* As you listen to Jackie, I want you to try to imagine the most amazing Boston accent you’ve ever heard, then multiply it by 500K, coincidentally the same amount that BAA must cut from its budget next year. *A lot of the stuff that they’re doing is really not OK. And everybody needs to understand that.*

But there was no time to dawdle. The crowd was on the move. The students took over Beacon street and made their way to historic Faneuil Hall where, unbelievably, Mayor Marty Walsh and Governor Charlie Baker were holding a press conference to announce Boston’s latest big score. No—not GE, which is relocating its corporate headquarters here thanks to $25 million in tax incentives. (Correction: GE’s tax kiss is now up to $150 million). I’m talking Forbes’ 30-under-30 summit. Forbes has chosen to make the Hub the hub of its celebration of innovation and [insert jargon here], explained the magazine’s editor, Randall Lane, because Boston is *a vibrant city with amazing entrepreneurial culture and civic engagement, where students and high achievers from all over the globe come together.* No—not the civically-engaged students who were thronging around outside chanting *save our schools.* I’m talking about other, different, higher-achieving students who, if they achieve highly enough, could occupy one of the astonishing number of high-rise luxury condos that will be the real legacy of Mayor Walsh.

Cranes in the sky, cuts in our schools
Speaking of Mayor Walsh, the students I spoke to had a lot to say about him, and, spoiler alert—it was all bad. Students like Bilguisa Barry, now a 10th grader at Boston Community Leadership Academy, are wondering what happened to the guy who ran for office on a platform of caring about the city’s students. *We’re losing all of this stuff and he hasn’t done anything to help us,* Barry told me. *We’ve sent letters but he doesn’t respond. He’s not responding to anything we do.* Barry and her friends were hopeful that the sheer number of students who walked out of class would force Mayor Walsh and other officials to finally pay attention. *It will make a difference when they see how many of us are here today,* said Yohanalis Estrella, who came out with twenty of her classmates from Brighton High. *They can see how much we care. Education is a right and we’re fighting for it.*

It will make a difference when they see how many of us are here today.They can see how much we care. Education is a right and we’re fighting for it.—Yohanalis Estrella, Brighton High 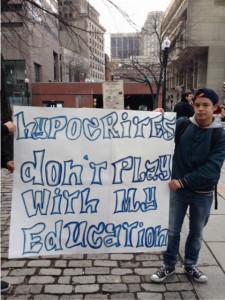 Signs of the times
Students had now been marching and chanting for a good two hours, and I had approached seemingly every student in the crowd who’d come bearing an intriguing sign. (Who takes $$ from students? Marty Walsh; The School Board Neva Loved Us; Hypocrites — Don’t Play with My Education). But the placard that drew me like a magnet was one of the few profanity-laden posters on display, this one aimed squarely at Governor Charlie Baker. Note that because this is a family publication, you will have to guess what the sign said. The student behind the cardboard was one Nathan Metz-Lerman, who attends Boston Latin Academy, which is losing $360,000, despite rising enrollment. I asked him why he’d singled out Governor Baker for special mention and Metz-Lerman said that he thinks Baker wants to see a system of all charter schools. *The crazy part is that the more public schools get underfunded, the easier it is to say, oh look, public schools are failing, so we should all just go to charter schools.*

They’ve heard our voices
Charlestown High, Madison Park, Boston Latin, Boston Day and Evening Academy, Fenway High — I was beginning to feel as though I’d talked to every BPS student in the city. And yet I was still in search of a last word. I needed someone who could sum up for me the amazing optimism and power that the students in the crowd seemed to feel, despite their complaints that Boston and state officialdom aren’t listening to them. And like that, Boston Latin Academy student Eamon Hanlon stepped up to my mic and delivered. We need to do this because as long as we’re silent, nothing will change. They’ve heard our voices.