Behind this week’s non-story is an interesting story… 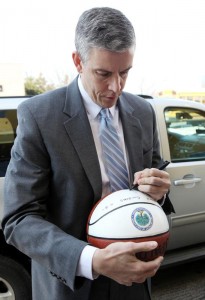 What a week, reader! The excellence express rolled into the Bay State, carrying some seriously career-ready cargo—none other than Arne Duncan himself. What do you mean you didn’t know anything about it??? Now ordinarily this is the point at which I would lambaste you for eschewing excellence in favor of conducting your own race to the bottom of the wine box. But you’re off the hook. You see, almost no one knew that Arne was in town this week as his visit garnered nary an inch of newsprint. Which seems a little, well, odd, given that the battle over the Liftin O’ the Charter Cap is reaching its acme. Tin foil at the ready, reader. It’s time for another edition of *the story behind the story.* 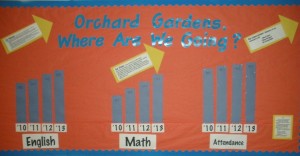 The first leg of Arne’s journey retraced a by now well-trod path: to Orchard Gardens, a Boston SIGcess story, otherwise known as the most chronicled turnaround school in America. Point of information: OG is beloved by Arne et al because it proveth the point that a school can be turned aroundeth if its entire teaching force is replacethed with other teachers. Note: the excellence express did not stop or even idle at either of the schools where this exacteth same recipe has proveth a failure.

The paint pot of innovation
But if there is anything that the Boston Globe loveth, reader, it is a familiar tale, so why no love for the Ed Sec? Here’s where our story takes an *awkward* turn. You see, Arne dropped by Orchard Gardens to tout the benefits of arts education, which makes everyone smile. That is except for the Boston parents who are seeing arts and music budgets at their kids’ schools shredded as an increasing proportion of state aid goes into the paint pot of innovation otherwise known as the city’s charter schools—which educate less than 12% of the city’s students but consume close to 50% of state aid. In other words, nothing to see here, folks. Back on the bus—we’re heading to Worcester. 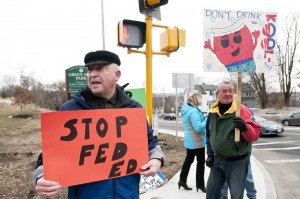 PARCC Plaza
Day two of Arne’s Excellence Adventure found him dropping by Worcester Technical High School to talk up *bigger rigor.* But his paean to college and career readiness was all but drowned out by the clutch of anti-Common Core protesters and an increasingly nasty dispute over whether parents in Worcester have the right to opt their kids out of the PARCC tests to be piloted this spring. The state, in a legal opinion for which flimsy would be a compliment, says they don’t. The Worcester School Committee begged to differ and voted to give parents of students attending 29 Worcester schools who’ve been slated to help *test the test* the option of just saying no.

A few fun facts
Now for a few fun facts. Members of the Worcester School Committee weren’t invited to attend Arne’s *bigger rigor* talk or even told about it, which seems kind of funny given that they are in charge of education in the city—for now. As everyone who is anyone agrees, school boards are so last century. And pay absolutely no attention to the Commissioner behind the curtain: Mitchell Chester, who in addition to his duties enhancing excellence in Massachusetts also happens to serve as chair of the governing board of PARCC. That glimmer is tin foil, reader, or perhaps the bedazzle of Chester’s own career prospects. The difference is increasingly difficult to discern. 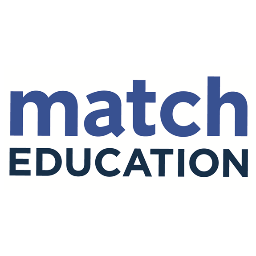 A perfect Match
At last we’ve arrived at the culmination of Arne’s tour: a visit to Match Education to talk up what is quickly emerging as the most fiercely urgent issue of our fiercely urgent times—teacher prep. And what better place than the only graduate school in Massachusetts dedicated to minting teachers for urban *no excuses* charter schools? Alas, I’m unable to tell you much about what was said at Match as no official transcript was released, there was no media coverage, nor did the Department of Education issue a press release. I can however tell you that:

Which makes good cents since producing thousands of *no excuses* charter schools also appears to be a particular passion of Arne et al. And if there is one thing we know about such schools, they are hungry little buggers when it comes to consuming teachers. Take the schools run by Match itself. Last year 41% of the teachers at Match Middle/High School made a final trip through the double doors. In other words, not that many when compared to the 75% of teachers who left Match Community Day, Match’s elementary school for English language learners. (Shout out to education blogger An Education for charter teacher turnover data).

No news is good news
So why didn’t the Boston Globe, for whom the relative outstandingness of Boston’s charter teachers vs. the achievement gap wideningness of the city’s public school teachers is a fave topic, see fit to report anything about Arne’s teacher prep talk? To be fair, Match has been garnering an awful lot of Globe ink of late. There was this story about the low pay of Match’s tutors, inspired by the allegations of a former tutor that first appeared on this very page. Then there was this column which argued that Match’s tutors shouldn’t be paid at all and referred to EduShyster as *dyspeptic* (which secretly delighted her). Then there was 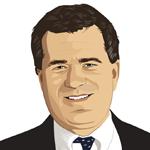 this story about growing concerns about Match’s rather, ahem, unique edupreneurial arrangement.

A meeting of the minds
But surely there had to be someone in the local pundatorial elite who could match Arne’s depths, if not his height? Cue music, ready the edu-cliches and take it away, Scot Lehigh…