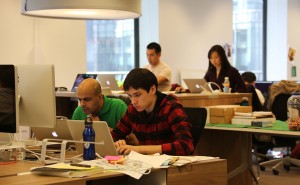 Students who currently use outmoded devices like these MacBooks will experienced enhanced excellence once they are provided with Amplify tablets.

If only there was a miracle product that could fix the many problems plaguing our failing union-stifled public schools, all in the blink of a cursor’s eye. Reader: today is our lucky day. Edu-visionary and Edushyster transphormer-in-chief Joel Klein has the very miracle gizmo that will at last allow our stifled public school students to begin the long climb up mediocre mountain towards the acme of excellence and the peak of 21st century workplace skills.

For months, excellence lovers everywhere have been on the edge of their seats wondering when, WHEN, Mr. Klein would finally unveil the miracle gizmo that he has been touting as the must-buy education reform accessory for months. Well, wait no longer excellence lover. On this very day Mr Klein:

will take the stage for a surprising announcement. Amplify will not sell just its curriculum on existing tablets, but will also offer the Amplify Tablet, its own 10-inch Android tablet for K-12 schoolchildren.

That sound that you just heard, reader, was the collective dropping of wine boxes everywhere. *I WAS NOT EXPECTING THIS AT ALL.* Not in 700 billion dollars years. The Amplify tablet is super 2.0 and innovative. For example, did you know that the tablet comes pre-loaded with state-of-the art emoticons to help teachers determine which students are comprehending their blended learning lessons? Note: these are different and much more innovative than the old-fashioned emoticons that students used to wear on their faces. Also, the kids can play super-cool games on their tablets. Games like one in which “Tom Sawyer battles the Brontë sisters.” The lucky little bastards even get to take their tablets home with them to keep the blended learning going all night long. 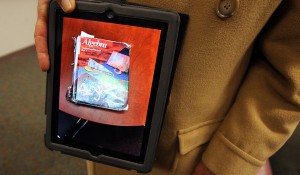 Of course some big questions remain. Like is it a good idea for Tom Sawyer to venture into the moors to do battle with Charlotte, Emily and Anne in his bare feet? And how can Amplify pull down some *phat kale* in the increasingly crowded edu-schlock market? Here’s where we get to the true geniu$ of the Amplify business model. I give you the concept of “bundling,” the traditional practice of wrapping one person in a bed accompanied by another, usually as a part of courting behavior. Oops—wrong Wikipedia entry. I meant this kind of bundling in which various services are bundled together in one irresistible package of innovation and excellence.

A preloaded tablet, training and customer care (largely from former teachers) starts at $299, along with a two-year subscription for $99 a year. A higher-end Amplify Tablet Plus, for students who do not have wireless access at home, comes with a 4G data plan and costs $349.

But can our cash-strapped failing schools really afford to drop a bundle on Amplify’s bundle of bundled innovation? That’s the sort of status quo thinking that forced Joel Klein to drop $25,000 of his own $$$ on the recent show down between rephormers v. haters in Los Angeles. The real innovators and edu-preneurs understand that our failing public schools can’t afford NOT TO hand over the dough. Besides, Amplify accepts all major credit cards, PayPal and also Race to the Top dollars, which come bundled with even more excellence and innovation.

And did I mention that in addition to providing a super cool tablet preloaded with many outstanding emoticons and games, Amplify will also do schools the outstandingly generous favor of storing their student data? For all of you conspiracy-minded haters, there is ABSOLUTELY NOTHING TO WORRY ABOUT so take off your foil hats and try to stop being such Angry Birds all of the time. You see, the real goal of Amplify isn’t to replace teachers with nifty tablets or peddle customized edu-schlock to the students whose data Amplify conveniently stores. It’s to teach students to read.

“The ultimate goal of this is to turn students into readers,” said Damien Yambo, a producer on the Tom Sawyer game and a former public-school teacher in Detroit. The games, he added, must also compete with Angry Birds.

Who should Tom Sawyer do battle with next? Send comments and ideas to tips@haveyouheardblog.com.