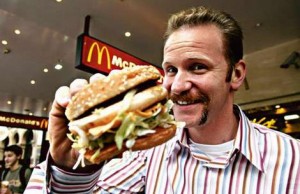 Morgan Spurlock, of Super Size Me fame, recently visited a charter school that immerses students in engagement, much like fries are immersed in hot oil.

Reader: as we rush to train minority students for the McJobs of the future, there’s not a second to spare. That’s why I was so glad to see CNN send Morgan Spurlock, the host of The Inside Man, to an outstanding academy of excellence that has figured out how to keep students engaged, interested and stimulated—every minute of every day. And there’s more good news. Spurlock just happens to be an expert on the nation’s fast food industry—in his documentary, Super Size Me, he ate nothing but McDonald’s meals for a month and almost died. Which means that he’s uniquely equipped to judge how well a school is preparing its students for the fast-paced world of tomorrow’s workplace. 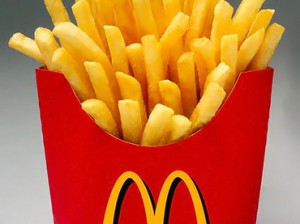 Inside Man
But first, who is this Inside Man and what exactly is he up to? According to this explanation which I am copying and pasting from the CNN website, each week, Spurlock gives viewers an insider’s view of diverse sectors of American life, diving deep into hard-hitting issues like medical marijuana, the elder care industry, migrant farm workers, gun ownership, union workers, bankruptcy and the drought. In other words it was time for the Inside Man to tackle the hard-hitting issue of our failed and failing public schools. Why do we spend so much and get so little return on our investment? How come our students do so bad on them international tests? And why do American students keep falling off of their ladders of excellence and opportunity? Is it because their little hands are greasy from fried snack foods?

The Inside Man was off on a mission. First stop: Finland, where Spurlock joined a long and growing list of American visitors who descend on that country intent on learning nothing. Then it was time to find a school in this country that takes every single one of the elements of the Finnish success story and either ignores them completely or does the precise opposite of what the Finns do. Welcome to Williamsburg Collegiate Charter School in Brooklyn, USA, where there is no magical 100% solution but rather one hundred, individual 1% solutions. Let’s take a look, shall we?

Williamsburg Prep’s “immersion approach” relies on key special sauce ingredients like tracking the speaker plus some nifty new flavors, including lots of hand clapping and snapping. Most importantly though, neither these students, nor their hands, are ever idle. And that’s key because it is a well known historical fact that idle hands do the Devil’s work. Also, in the jobs of the future, there will not be much downtime, if you know what I mean. In other words, Williamsburg Prep looks a lot like a school in Finland, if Finland was actually called SLANTland and instead of educating students, the Finnish teachers were training seals.

Besides, I’m not convinced that Williamsburg Prep has actually cracked the code. Anyone can engage 100% of the students 100% of the time while they’re sitting down, but what about when they’re up and about, transitioning between work stations? Is there perhaps another academy of excellence and innovation that is taking the Taylorist approach to workplace management, obsolete since the 1930’s, and applying it to young minority children in the classroom? 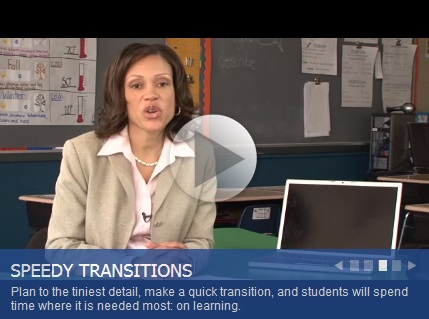 In the time it took you to watch that video, I was able to replenish my glass twice because, in the name of efficiency, I now keep my winebox right next to me—every minute of every day. In fact, I think it’s time for a toast, reader. Here’s to standing AND stepping left on three, and, while we’re at it, here’s to clapping and snapping and to the jobs of the future that will require all of these skills. Unless, of course, those jobs are in Finland…

Should Finland change its name to SLANTland? Send comments to tips@haveyouheardblog.com.