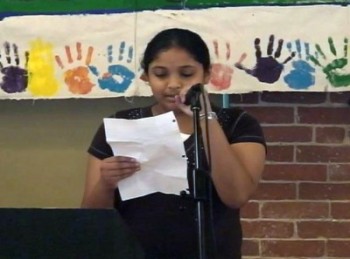 A student in the Andover Bread Loaf writing program in Lawrence shares her work.

It’s field trip time, reader, and I’ve got a special treat in store for you today: an actual good news story. So turn that frown upside down and climb aboard—we’re headed to Lawrence, Massachusetts, a city not exactly known for good news.Today’s destination has nothing to do with the grand experiment in education reform that’s currently underway on both sides of the Spicket River (remember this is a good news story). Instead we’re here to drop by one of my all-time favorite programs: Andover Bread Loaf—a writing workshop led by and for students in the Lawrence Public Schools.

Write like you mean it
First a note about our location: we’re hanging at El Taller, a café and book shop that was opened last year by a local English teacher and quickly become a cultural hub for young writers. (Sorry reader, no adult bevs available here—for those you’ll have to swing by Taller’s sister restaurant Café Azteca). And by young, I mean really young. The students who’ve come out tonight to share their poetry and prose range from 10 years old up through high school. Most of the adults in the room, meanwhile, can still recall exactly how it felt to stand in front of that microphone for the first time; they’re Andover Bread Loaf grads.

Meet the writing leaders
The people in charge of tonight’s event are students too—some of the 20-30 *writing leaders* that go through the program each year. With the help of Bread Loaf’s extensive network of teachers in Lawrence, the writing leaders get enough mentoring and support to run monthly writing workshops and special events like this one. Writing leaders aren’t all stars or super star test takers, by the way. In fact, some of them are still learning English, a not uncommon phenomenon in an overwhelmingly immigrant city. They’re kids who have a story to tell and want to help other kids—who look like them, who hail from the same tough neighborhoods as them—tell their stories. 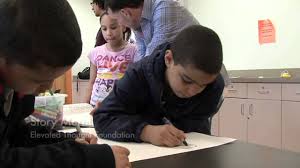 Show us your data
But enough with the feel-good stuff and the heart warmery already—you want to see some data. You want to talk outcomes. You want something we can measure. Well here’s a data point for you: in the three decades that the program has been around, close to 100% of the writing leaders—more than 600 in all—have not only gone to college but completed college, and this in a city where the high school drop out rate has long hovered around 50%. Program founder Lou Bernieri (full disclosure: he’s a friend of mine) says that there’s no secret formula to Bread Loaf’s success. *The writing leaders leave Lawrence as leaders. They go to college already having found their voices and they feel at ease in a world where literacy is really important.* 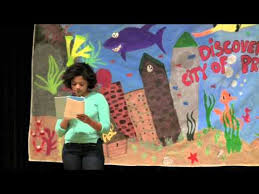 Like #edreform, only the opposite
There is something else about Bread Loaf, though, that makes it unique in these times of achievement gap fever. You see, the education reform movement starts from the premise that it’s not just our urban public schools that have failed but our cities too, that neither has anything to offer. The only hope, goes this line of thinking, is to import #excellence by the truckload—read smart, mostly white recent college grads—to teach and tutor in hopes that their Ivy Leaguishness will rub off on the students in cities like Lawrence. Bread Loaf assumes the opposite: that the most powerful example students in a hard-scrabble city can see is that of their peers leading and succeeding.

Coming home
There’s another metric by which Bread Loaf is, at least to my way of thinking, a happy, good news story. An astonishing number of writing leaders have come back to Lawrence after college. They’re in the schools as teachers and administrators, they run nonprofits and local businesses—in other words, they’ve come back to Lawrence to lead. All this, by the way, on the slenderest of budgets; there are no Subaru ads for Bread Loaf; no Walton Family Foundation largesse. With a little more dough, Bread Loaf could reach far more Lawrence students and launch its next big thing: Teach Lawrence, an effort to help locals—including immigrants who were professionals back in the Dominican Republic but work at service-industry jobs here—train to become teachers.