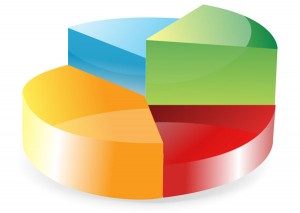 Most edu-polls are filled with completely meaningless data used to justify wildly misleading conclusions. This 3-D pie chart is lacking only corporate edu-facts.

Everyday I consume between 4 and 5,000 edu-facts. Now you are probably wondering: ‘isn’t that hard on your digestion?’ and ‘don’t you have to consume a lot of alcohol to wash down all of those edu-tidbits?’ The answer to both of your questions is ‘yes.’ But the good news is that I have discovered a quick and easy way to consume said facts. Reader: meet the edu-poll. These handy, compact vehicles are ideal for quickly processing “information” and repackaging such in order to dazzle, confuse or engage with other like minded advocates for education reform.

But what makes a really good edu-poll? 68% of polling experts agree that the best edu-polls confirm the views of whatever corporate advocacy group is behind them. For example, one of my favorite recent polls is this gem from the Pioneer Institute right here in Massachusetts. (Savor the entire poll here along with a box of your favorite wine.)

The Pioneers sent a questionnaire to 500 Massachusetts residents and discovered that their views are almost exactly like the views of the people who work at the Pioneer Institute. What are the chances??? More than three-quarters of those polled were pro-vouchers, wanted LOTS more charter schools, and think it would be a great idea to give tax breaks to companies who donate to something called “school choice programs.” While EduShyster was a little surprised to find that Massholes are so, shall we say, ‘advanced’ on these topics, Jamie Gass, who directs Pioneer’s Center for School Reform, barely blinked. Said Gass: “Education is the civil right$ i$$ue of our time.”

Snap! Oh no he didn’t! Note: if you are playing the EduShyster drinking game at home, consume 1 unit of alcohol pronto.

Now what if the data in the poll contradict whatever argument the group behind the poll is trying to make? No worries at all. For example, this recent survey called ‘Losing Ground? Teachers and Unions‘ had me very excited because like all experts I recognize that unions are the only barrier to excellence that our students face. So imagine my disappointment when the poll results showed this:

Teachers are less likely than in 2007 to say unions are absolutely essential, but they still say they are very important. [M]ore than three quarters of teachers (including more than seventy percent of new teachers, with less than 5 years of experience) say that, absent the union, their working conditions and salaries would suffer. Majorities also agree that they would be more vulnerable to school politics, and would have nowhere to turn in the face of unfair charges by parents or students.  More than half of teachers who are not even members of a union or association agree that the union protects the working conditions and salaries of teachers, and that teachers would be more vulnerable without a union.

OK, you’ve already consumed two meaty edu-polls but you’re still looking for one last survey. Something light, just to take the edge off. I recommend this stellar sample from last year that found that 70% of Americans believe that great teachers have an innate natural ability that cannot be taught. Now if Bill Gates could just come up with a device to measure that ability we’d be all set.